OnePlus will unveil its net generation of series i.e. the upcoming OnePlus 8 series soon. The upcoming OnePlus 8 series include OnePlus 8, OnePlus 8 Pro and OnePlus 8 Lite. There are many reports on the web for a long time about the upcoming smartphones. To recall the CAD renders of the device came soon after the OnePlus 7T’s launch. Earlier this month, OnePlus had a media conference in China. Through that media conference, they announce that they have completed testing of 2K resolution with a 120Hz display. Later OnePlus’s CEO has shared a video of the 120z running device. 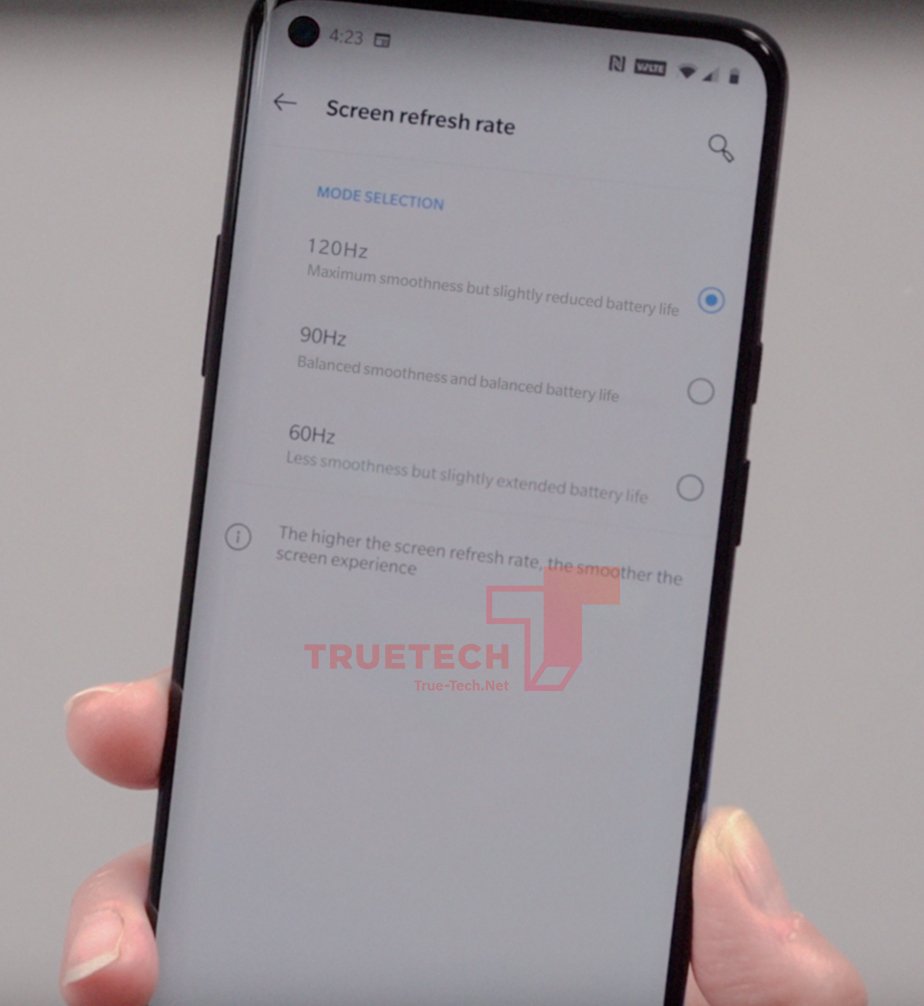 There were some reports which suggest that the upcoming OnePlus smartphone won’t feature a 120Hz screen refresh rate display. But as per a new report from Tru Tech, they also add an exclusive live image of the upcoming OnePlus 8 Pro which was leaked by a OnePlus insider. The image clearly shows that the upcoming smartphone will have a 120Hz screen refresh rate as the image shows the selection option for 120Hz display in the Settings menu.

Further, the report from Tru Tech also claims that the hands-on image of the OnePlus 8 Pro which has been surfaced online may belong to a pre-production unit. The image shows that the handset has a punch-hole and with very slim bezels. To the left edge, we can see the volume rockers. And to the right edge of the device, it sports an alert slider and a power key. As expected, the OLED display of the phone also sports an in-display fingerprint scanner. This image tells us that the OnePlus is ditching the notch-less display and pop-up selfie cameras which we found on OnePlus 7 and 7T series of smartphones.

The most important thing to notice from the image which appears on the web was the “Screen refresh rate” menu in Settings and it has mode selection options for 120Hz, 90Hz, and 60Hz. As per reports, we expect the smartphone to have support for Quad HD+ resolution. The text below the 120Hz option reads “maximum smoothness but slightly reduces battery life.” It does not state whether selecting the 120Hz option will switch the display resolution to 1080p. So we can’t confirm that the display is compatible with Quad HD+ and 120Hz screen refresh rate. While there is also a possibility that the display of the OnePlus 8 Pro will come with a Quad HD+ resolution along with a 120Hz refresh rate. Since the report suggests that the image belongs to a pre-production unit, we have to wait whether the 120Hz option will also be available on the final product.

Other Specifications of OnePlus 8 Pro!

As we have reported earlier, those reports suggest that the upcoming OnePlus 8 Pro will sport Qualcomm’s Snapdragon 865 since the device has already appeared in the GeekBench listing. The listing also suggests that the smartphone will sport a whopping  12 GB of RAM. Further, there were reports which suggest that the device will come with 256 GB of storage.

The smartphone will sport a massive 4,500mAh battery which will come with fast charging support. Coming to optics, the OnePlus 8 Pro may sport a quad rear setup. This setup will include a primary 64MP Sony IMX 686 sensor which couples with a secondary 20MP ultrawide sensor, a tertiary 12MP telephoto sensor and finally a ToF sensor aKa 3D depth sensor. To the front, the OnePlus 8 Pro sports a 32MP sensor that sits inside the punch-hole display.

There is no report on the web which confirms that the OnePlus 8 will come with a 120Hz screen refresh rate with a punch-hole. Anyway, let’s wait for things to go official!