OneUI is Samsung’s answer for an Android skin. It does not give a pure Android experience like the OxygenOS from Oneplus, but it does come close as one of the best ones out there. Especially, considering all the additional bits that you get with OneUI along with Samsung’s Knox security. So many loyal Samsung customers choose Samsung over anything else because of their unique but user-friendly OneUI skin too.

Now, most of the devices from Samsung are running on OneUI 2.1, which is based on Android 10. But we are getting rumors about a new OneUI version coming soon in August. This version of OneUI will also be based on Android 10 since Android 11 is still a couple of months away. This new update is expected to come in the summer of Samsung where they usually launch a bunch of devices too. This year we will see the Note 20 series, Fold 2 series, Flip 5G, Galaxy tab S7 and even the Galaxy watch. So which of Samsung’s devices will receive the update, and what is new? Well, let’s find out in this article. 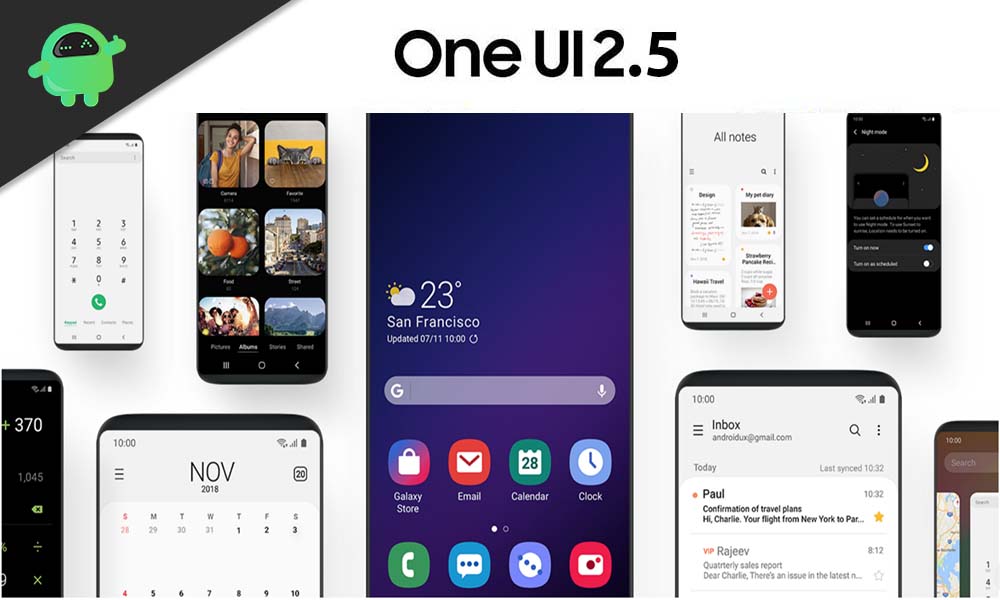 This will come as an improvement over the OneUI 2.1. Most of the features from the OneUI 2.1 will remain the same with very minimal changes. One absolute change that we will see in this new update will be the support for Android 10’s swipe gesture navigation support for third party launcher applications. This is missing in the current version of OneUI.

The new update will be a refresh that will include the support of a few new widgets too. There won’t be a significant change in this update. We will have wait till the Android 11 based OneUI 3.0 to launch to see some substantial changes in the UI.

Every year Samsung hold’s an event in the summer, called the Galaxy Unpacked event. This year it is happening on the 5th of August. Many expected that due to the pandemic, Samsung might push the date a bit further, but that did not happen. Instead, we can stay assured that we will see the new Galaxy Note 20 series launching with the new OneUI 2.5. We don’t know for sure if Samsung will exactly launch this new version of OneUI at the same time as the event, but it is quite apparent to do that. A new software update along with the launch of a new set of hardware is what Samsung always does. We save the OneUI 2.1 launching together with the S20 series. We can expect the OneUI 2.5 launching together with the Note 20 series too..

Since the update isn’t official, the expected devices to receive the update is also not concrete. But this new update is coming with Android 10. So definitely, all the Samsung devices that are on Android 10 should receive the upcoming update. The Note 20 series and Fold 2 series might be the first ones to come with the new OneUI 2.0. Following them, the S20 series, Note 10 series, and the S10 series will also receive this update. After the flagship series is done, Samsung will push out OTA updates to the rest of the mid-range and budget Samsung devices too.

Based on the devices that are currently running the OneUI 2.1, we have compiled a list of smartphones that should receive this upcoming update. Now, this is not a confirmed list, but we can expect these devices to receive the new OneUI 2.5 update.