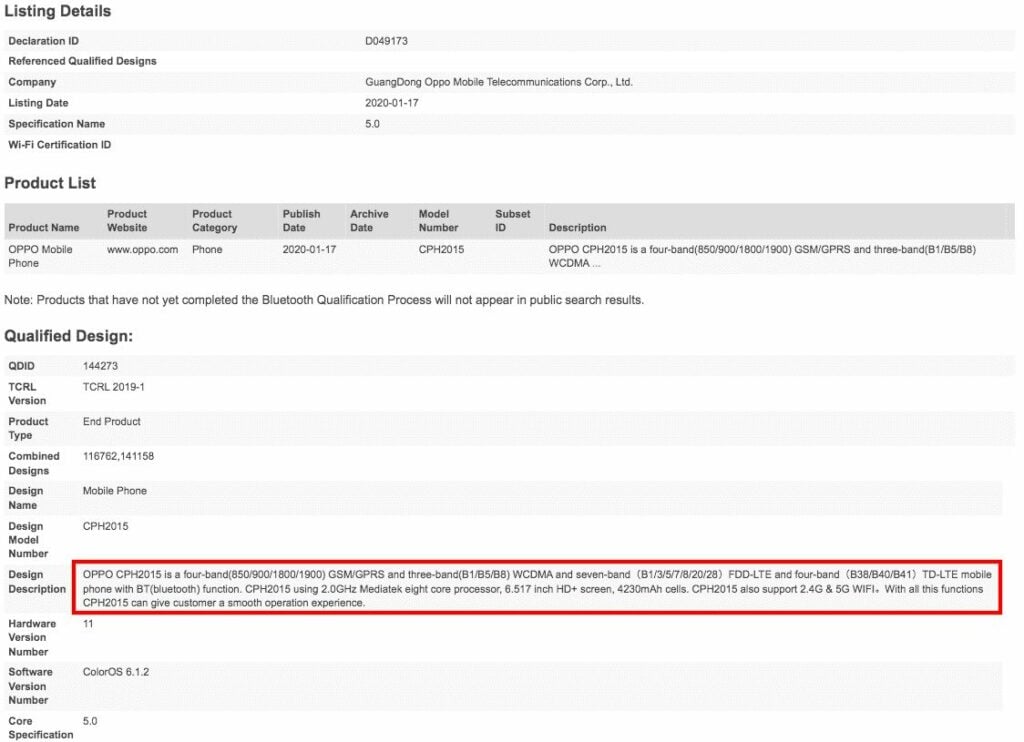 As per the Bluetooth SIG listing, OPPO A31 flaunts a 6.517-inch FHD+ display. Talking about the processor, a MediaTek octa-core chipset which clocks at 2.0GHz powers the smartphone. The device will pack a 4,230 mAh battery. Connectivity options include, it includes support for Bluetooth 5.0 and dual-band Wi-FI. The device will run on ColorOS 6.1.2 which is based on Android 10.

Earlier the FCC certification of the upcoming OPPO A31 has revealed its dimensions, it states that it will measure 164 x 755mm.  Sadly, the smartphone doesn’t support fast charging. It only supports the normal charger 5V/2A i.e. 10W charger. Additionally, FCC has also revealed that it will sport a triple rear camera setup and a fingerprint sensor at the back. The images of the pre-production unit of OPPO-A31 show that it will sport a waterdrop notch, a 3.5mm headphone jack, sadly still the device has a micro-USB port and single speaker.

Talking about placements, the device has its volume rockers to the left and power button to the right. We don’t know when the smartphone will debut and this will be the first “A” series smartphone that launches this year.

OPPO has recently launched the OPPO F15 which sports a 6.4-inch FHD+ AMOLED display with a tiny notch. The device has an aspect ratio of 20:9 & has a screen to body ratio of 90.7%. This display also houses the in-display fingerprint 3.0 sensor. MediaTek’s Helio P70 chipset powers the smartphone. The chipset pairs with 8GB RAM and 128GB internal storage.

The OPPO F15 sports a quad rear camera setup which includes a 48MP primary sensor which couples with an 8MP ultra-wide-angle lens and a tertiary 2MP macro sensor and finally a 2MP depth sensor. To the front, it has a 16MP f/2.0 sensor.

The OPPO F15 packs a 4,000 mAh battery and supports VOOC 3.0 tech. The smartphone still runs on ColorOS 6 which is based on Android 9 Pie.