When you reach the Shroom City, you will encounter a Mini-game for freeing up key-finder Luigi, who has a key to Peach’s Castle that you need to progress in the game. The Mini-game involves a Snifit game run by a merchant who tasks you with guessing their Snifit mood. This is not as easier as it sounds, and if you don’t know the proper way, then it might take you a fair while to even get past this phase of the game.

You will unlock this mini-game by going to the northwest corner of Shroom City. Here you will find the merchant’s booth decorated with a huge lamp. Here the merchant will ask you to guess the mood of their Snifit. Now, if you are lucky, then you might get this done at the first try, but that is not the full proof way to complete it. In this guide, we will take a look at how you can get past this mini-level without solely depending on your luck. 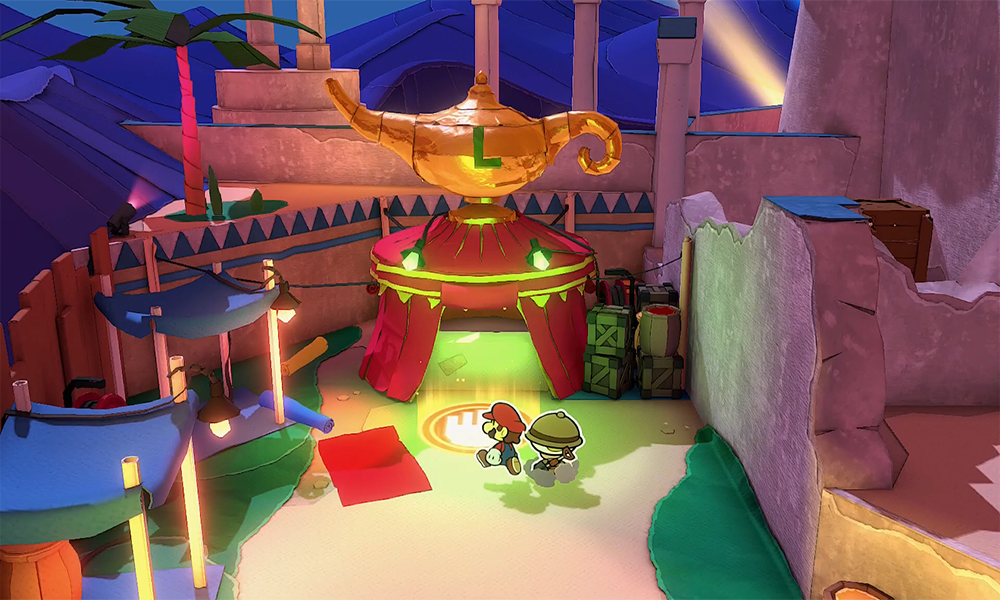 Before you go on ahead to the merchant and initiate the game, make sure that you have 1,100 coins on you. This is because to participate in this game, you will need to buy your way into it.

Now for the first round, you will have to spend 100 coins. Here, you will get three guesses. Of course, there is a face mask here, so don’t just think that you can tell the mood by looking at the face. You might get lucky and end up choosing the correct in these initial attempts, but the chances of that happening are pretty low. So think of the first round as three random guesses, which you might right if you are lucky enough. 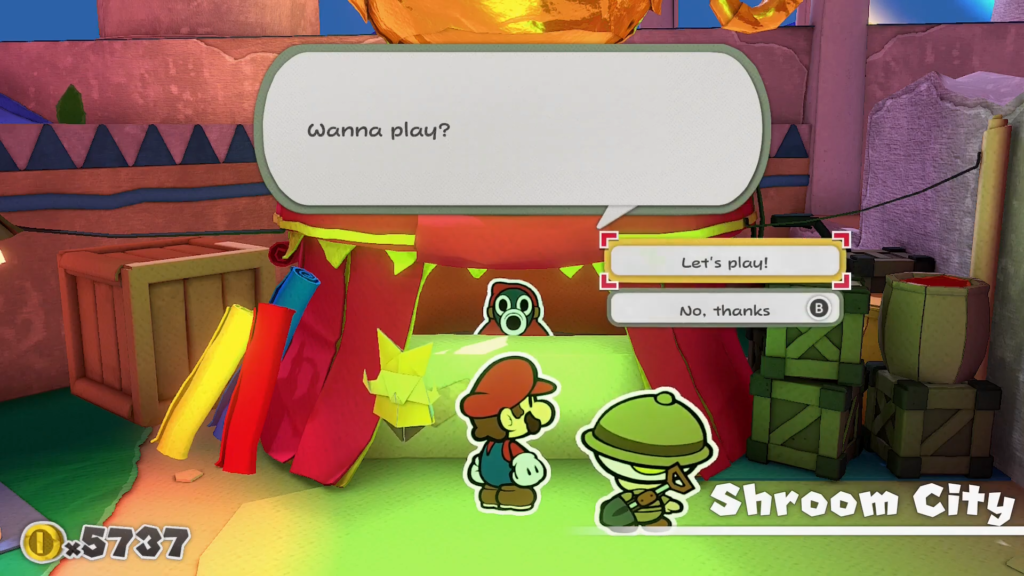 Now, if you get lucky with the initial three guesses, then well done, but if not, then don’t worry. After the first round comes to an end, you will get the chance to go for another round with another three guesses. But this time around, the charge won’t be 100 coins. Instead, you will have to give up a total of 1,000 coins. If you choose not to go ahead with the second round, then it will be game over immediately. 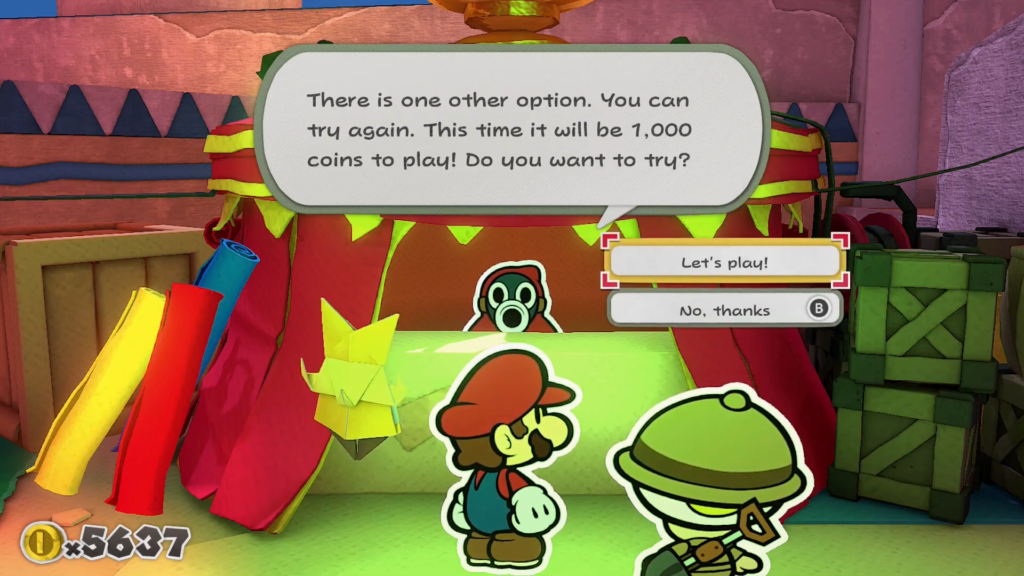 Now in the second round, you will again get three guesses. Make the first and second guess here. If you are lucky, you might randomly get it right. If not, then just before the final third guess of the second round, you will see the Snifit give off a “Heh Heh,” indicating that the players should pick the option “Snickering sniff.” You might see the “Heh Heh” from the Snifit in the first try of the second round too. Just choose “Snickering Sniff” whenever you see the Snifit say these words. Once you do make this choice, the Snifit will respond to you with surprise asking you, “How’d you do that?”. This will mean that you were successful with your guess, and the mini-game is complete. 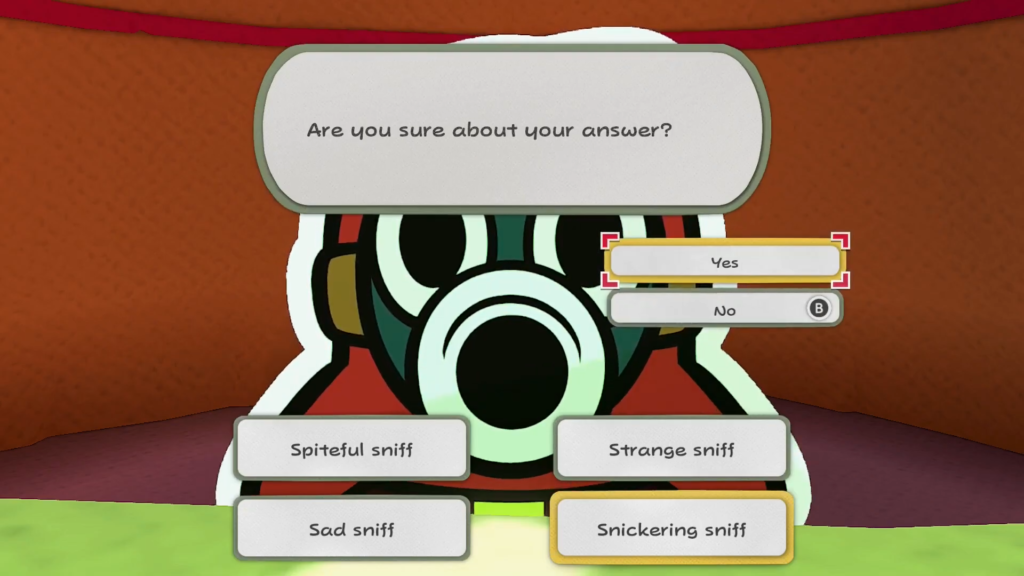 Now initially, you were promised 10,000 coins for completing this task, but it does not happen. Instead, you get access to the lamp at the top of the Snifit’s tent. Rub it, and that will set Luigi free, and with you will get the key to Peach’s Castle from Luigi. Using this key, you can get to the previously inaccessible area of Shroom City. Here you will also find The Origami King’s NSFW collectible, which has been talked about on a lot of the game’s forums.