New updates are added on September 23, 2020: September patch is now live for the Realme 5 Pro users which arrives with version number RMX1971EX_11_C.07 and the size of the update is 467 MB. The update adds tons of new features like super nighttime feature, deep cleanup feature, default audio recording, time display option, OTG switch, and several other features as well. Here is the complete changelog of the update:

New updates are added on July 31, 2020: The July 2020 security update is now rolling out for the Realme 5 Pro. The update brings the July 2020 security patch along with some feature like smooth scrolling, multi-user interface, optimized screen recording, and also fixes some of the bugs on the device. It arrives with version number RMX1971EX_11_C.05 and weighs in around 493 MB in size. Here is the complete changelog of the update:

New updates are added on June 14, 2020: June 2020 security patch is now rolling out for the Realme 5 Pro. The update bumps the security patch level to June 2020. One thing to note is that the company has skipped the May 2020 security patchset for the device and has simply pushed the latest June patch. The update also adds PaySa, Realme Link, new charging animations, decimal charging animation, new settings, and several optimization features as well. The update arrives with version number RMX1971EX_11.C.04 and weighs in around 459 MB in size. Here is the complete changelog of the update:

New updates are added on May 1, 2020: The April 2020 security patch is now rolling out for the Realme 5 Pro smartphone. It arrives with version number RMX1971EX_11_C.03 and weighs in around 340 MB in size. The update along with the latest April 2020 security patch also adds DocVault, fixes audio issues, adds smart sidebar and much more. Here is the complete changelog of the update.

New updates added on March 16, 2020: The Realme UI (Android 10) update for the Realme Q (also known as Realme 5 Pro) in China. The update arrives with the version number C.02 and brings tons of new features like the smart sidebar, new screenshot features, navigation gestures, etc. Check out the complete changelog of the update, below:

• Added UI upgrade to realme UI
• New authentic design is newly upgraded, the vision is more shocking, the operation is more efficient, and the experience is more natural

The users of the Reame Q who wants to update their device right away can download the APK from here and install it on their devices to grab the update package file faster than the normal OTA.

New updates added on February 29, 2020: Today we have added the firmware link to download the official Android 10 update for Realme 5 Pro with version RMX1971EX_11_C.01. Follow our guide on how to install Realme firmware on any Realme smartphone manually.

New updates added on February 28, 2020: As promised, Realme has rolled out the official Android 10 update to Realme 5 Pro with version RMX1971EX_11_C.01. The update is skinned under Realme UI which is merged with both Android 10 and Realme features. You can grab the download link and install the update manually on your device.

According to Realme twitter handle, this update will also bring the VoWiFi support for Airtel and Jio users in India.

Hey, the realme UI update for realme 5 Pro with the VoWiFi feature is in a staged rollout process and will soon be available on your device. Thanks!🙂 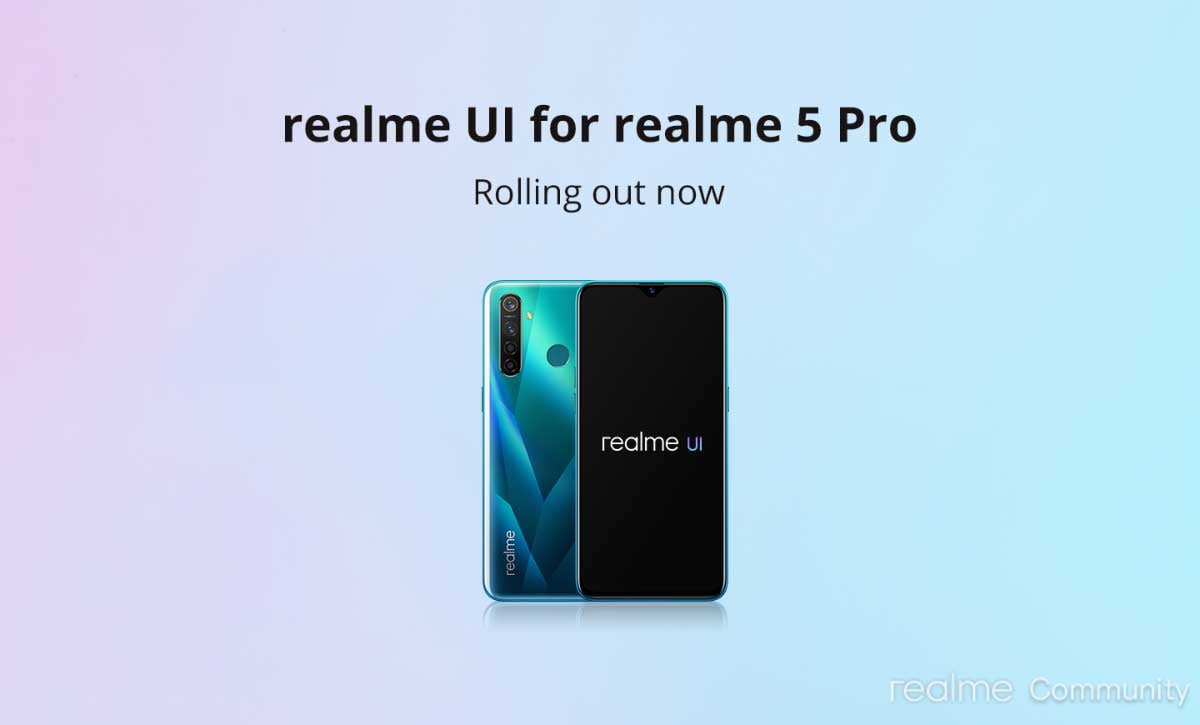 As you can see the update is now live and there are reports of users who has already received the update of Android 10 on Realme 5 Pro under Realme Ui.

Smart Sidebar
• Optimized user interface and improved one-handed operation.
• Optimized Smart Sidebar: Replaced File Console with File Manager; removed OSIE Visual Effect and No Notification Alerts.
• Drag an app out of Smart Sidebar to open it in Split-screen Mode.
• Added two new features: “Assistive Ball Opacity” and “Hide Assistive Ball on Fullscreen App”.
• Optimized the Floating Window feature for more apps.
• Added Bubbles: A bubble is displayed when you open an app in a floating window from the Smart Sidebar. Tap the bubble to collapse or open the app.

Tools
• In Quick Settings or Smart Sidebar, you can open Calculator in a floating window.
• Added the trim feature in Recordings.
• Added the Weather (dynamic) ringtone, which automatically adapts to the current weather.
• Added weather-adaptive animations in Weather.

New updates added on February 27, 2020: Today Realme has started rolling a new firmware for the Realme 5 Pro which should b the last Android 9.0 Pie version. This version to fix Android 10 incompatibility and to ensure a smooth upgrade process. The update is hitting Realme 5 Pro users with version RMX1971EX_11_A.17. 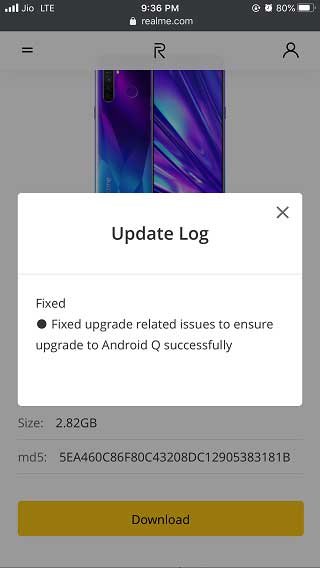 You can now download and install the RMX1971EX_11_A.17 version manually on your device. As per the changelog, this version fixes the upgrade related issues to ensure the upgrade to Android Q successfully. Download the firmware here and flash the Realme firmware on your device manually.

Early adopter system is being pushed

New updates added on February 21, 2020:  Responding to a user query on when the Realme UI and Android 10 update for the Realme X will arrive, the official Twitter handle of Realme India Support, stated that the update will start pushing out from the last week of February.

Thank you for reaching out to us. We would like to inform you that we will start releasing realme UI update in batches for realme X from the last week of February onwards. Keep following our social media handles and official community portal for our latest updates.

New updates added on February 18, 2020:  According to a recent development, in response to a query for the Android 10 update for the Realme 5 Pro, Realme India Support has cleared the air that the device won’t get a beta version of Realme UI instead it will be directly updated from Android 9 to Android 10. In fact, there are several other Realme devices that are not going to be a part of the beta program and will directly be updated like the Realme X.

Hey, realme UI Beta Program will not be available for realme 5 Pro. Keep following our threads for further announcements regarding the release of the stable update of realme UI for your device. Thanks!🙂

New updates added on February 15, 2020: Finally, the Android 10 beta registrations for the Realme 5 Pro which is also known as Realme Q in China has begun. Users who are interested to enjoy the latest features like focus mode, dual-mode music sharing, three-finger screenshot, etc with Realme UI and Android 10 can register themselves by heading here. Note that the announcement was made on the Weibo platform by Realme’s official handle and users can now register themselves till February 23.

Keep in mind that this beta registration is only open for users in China and is limited to 2000 people. Here is the registration entry link to get yourself enrolled. Successful applicants will be notified via a message on February 26 followed by an OTA update to Android 10 beta beginning from February 27.

Realme has a lot of smartphones that are sold in the home country of China are also bein launched in India. For instance, Realme Q is sold in China while its Indian variant is called Realme 5 Pro. In fact, Realme has been been on top of its game in India thanks to the brilliant performance of Realme 5 Pro in India back in 2019. And for those who were waiting for the Android 10 (Realme UI) update on their Realme 5 Pro then, the update might hit the units on February 14 for beta users. Moreover, going by the Android 10 update roadmap for Realme devices, Realme 5 Pro is expected to get the update in Q1 2020.

But going by the Realme support in China, the Realme Q/Realme 5 Pro will get the Realme UI update starting from February 14 for early adopters.

Besides, going by the Android 10 update roadmap, Realme Q is going to be updated soon in China which also suggests that Realme 5 Pro will also be served with the Android 10 update pretty soon. We will keep you posted once we have more information in this regard. In the meantime do check out the Realme section to read more about Realme smartphones.