The popular streaming service Shudder is not working in Chromecast, and several paying users took this to social media platforms. The users have contacted customer care to find the reason behind the problem, but it was in vain since the support team has no clue about it. Shudder streaming is working fine in Android and on the computer, but it is failing to transmit the content over the streaming media player. We will dig into the matter and find out the reasons behind it then resolve the issue accordingly.

Fix: Discovery Plus Not Working on Firestick, Roku, Xfinity, or Chromecast 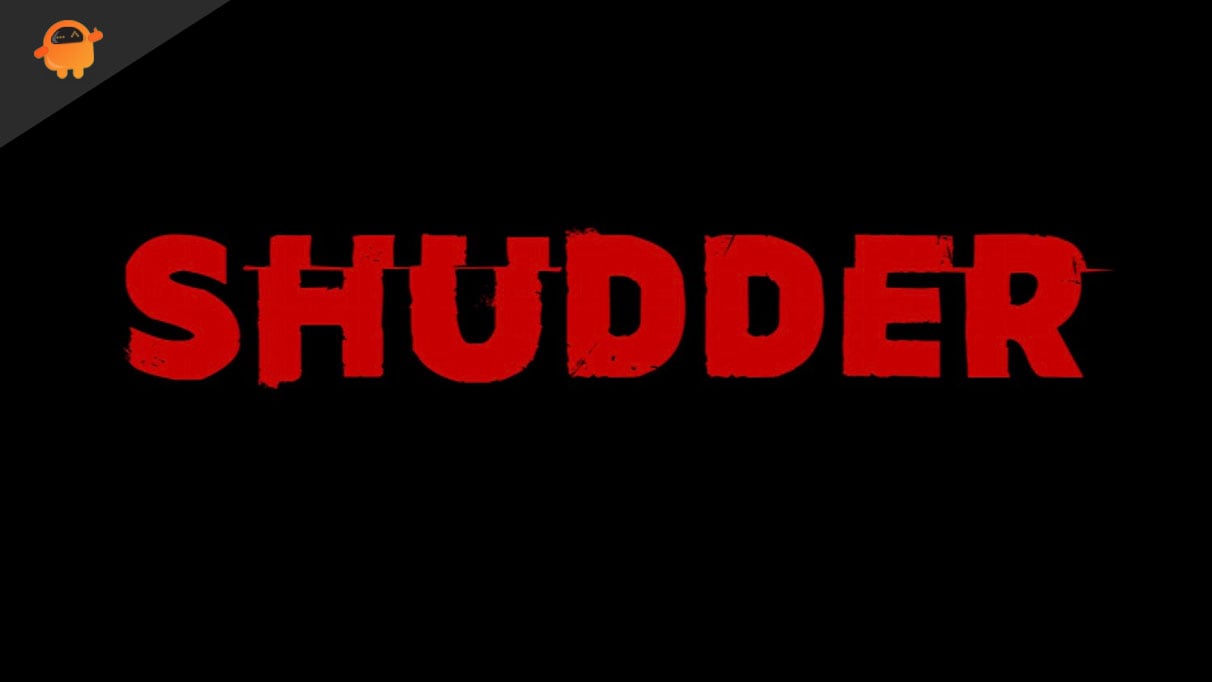 Why is Shudder not working in Chromecast?

Shudder is a video-on-demand streaming service provider, and they are available in selected countries only. You may have a unique problem in your hands, and I have suggested multiple solutions to tackle them all. I have covered solutions for Windows/Mac/Linux, Android, and iOS devices, so you don’t have to worry about the cross-platform fiasco. Let us look at several reasons why Shudder is failing to stream over Google’s streaming device.

Shudder is paying a huge chunk into the hosting services, and they are responsible for storing the media content and streaming it through the apps. You can’t do much when the problem is coming from the provider’s end, and the users have no choice but to wait till the engineers resolve the issue.
The customer support team doesn’t receive enough information about the server status, and it’s not available in the public domain. You don’t have an option to find out about the Shudder server status, and they should have a dedicated page on the official site.

You are transmitting the signals from one device to another using a streaming service, and there’s a lot of things going on in the background. We have to take a moment to appreciate the makers for simplifying the technology for the users. You should take time to update the software on all devices, so there are no compatibility issues.

You should check the internet connection and its limitations. I will show you how the provider or the device has restricted the streaming service on the smartphone.

Shudder is an active streaming service, and it follows security protocols and policies to transmit the content on the TV. You should not have any incorrect or unsupported characters, or else it fails to work with the streaming devices.

FIX: Shudder not working in Chromecast

I have shown you multiple solutions to tackle the Shudder and Chromecast streaming issues. Meanwhile, you should talk to the customer support team and find out if there’s any problem with your account.

Shudder might be having internal issues and we can’t solve it. Paying subscribers have to wait for the official engineers to fix the problem or you can move to another platform.

Millions don’t turn off smartphones, tablets, and computers for weeks until it runs out of juice. The hardware is capable enough to cope with the hardships, but the software requires a reboot from time to time for optimal performance. Give your smart devices a much-needed reboot.
Close the Shudder app running in the background including in Android, iOS, Windows, Linux, and Mac computers.

Almost all Android phones have a Restart or Reboot option and press the power key for four seconds to reveal the options. 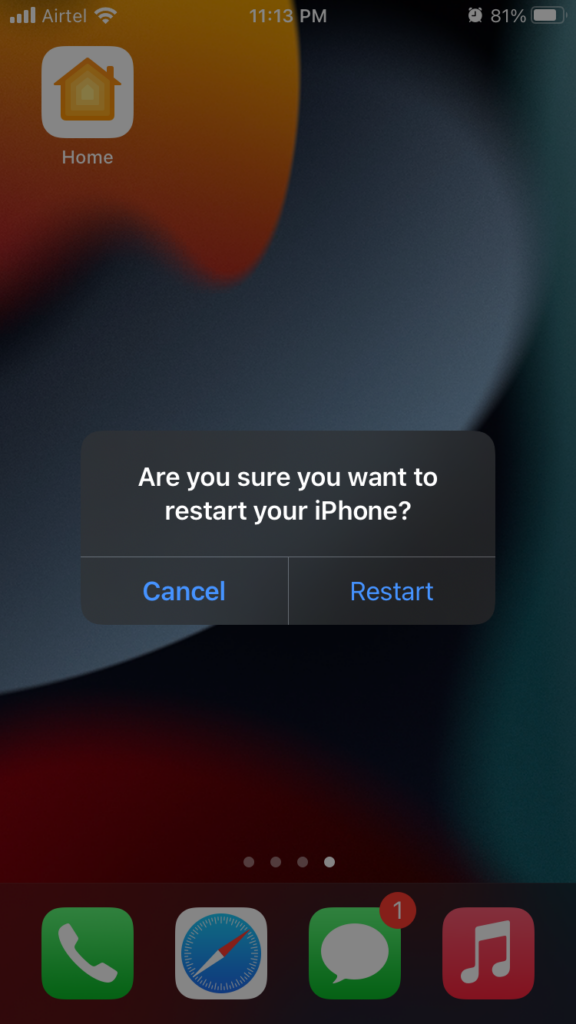 iOS software doesn’t have a Restart option in the Side button, and you have to Shut Down manually then turn it back on.

Turn off Chromecast and let it sit idle for a few minutes.

I implore the Android and iOS users to let the smart device rest for a few minutes. Let the iPhone or Android phone sleep for five minutes and give enough time for the internal components to cool off. You can turn on the smartphones after five minutes, and it will load the drivers and required startup services again, resolving the issue.

Connect your Chromecast and smartphone to the same Wi-Fi network to avoid connectivity problems. The next-gen Wi-Fi routers come with 2.4 GHz and 5.0 GHz bands. The latest Android and iOS smartphones support the 5 GHz band, so you should connect the devices on the same band.

That’s the compatible pattern for the smartphone and Chromecast, so make sure to follow it. You can’t have the Android/iOS device on the 2.4 GHz band while the streaming device is on the 5 GHz band. I understand that the streaming device requires better internet connectivity for a no-lag experience, but it’s a necessity.

The latest Android and iOS software have advanced features that assist the users to restrict the bandwidth and you can decide the threshold. The software developers have added a minimum of 2 GB data – 5 GB per day in the device. Shudder streaming service takes up to 8 GB per episode and even higher in some cases. Your smart device puts a restriction on the internet so you can save the data for later on. Allow me to show you how you can facilitate the internet and remove limitations.

In Android 12 or Earlier:

1. Open “Settings” from the notification bar.

2. Choose “Network and Internet” from the options.

5. Swipe down and tap the “Network usage” option.

6. Choose the “Treat as unmetered” option.

Don’t choose “Detect automatically” since it is contributing to the problem.

3. Tap on the (i) icon beside the connected Wi-Fi network. 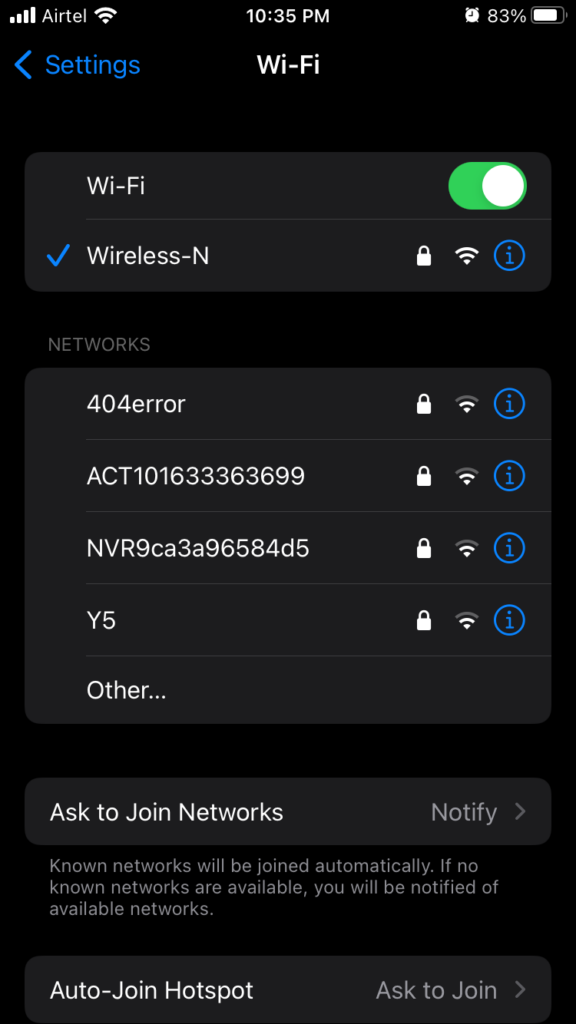 4. Turn off the “Low Data Mode” to remove the restriction. 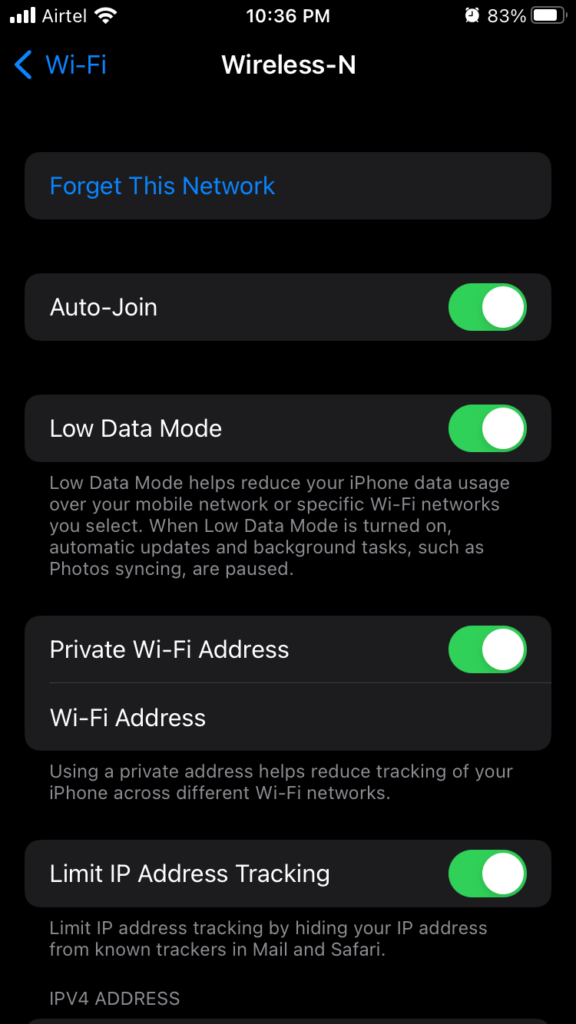 5. LDM is turned off and restart the iPhone. 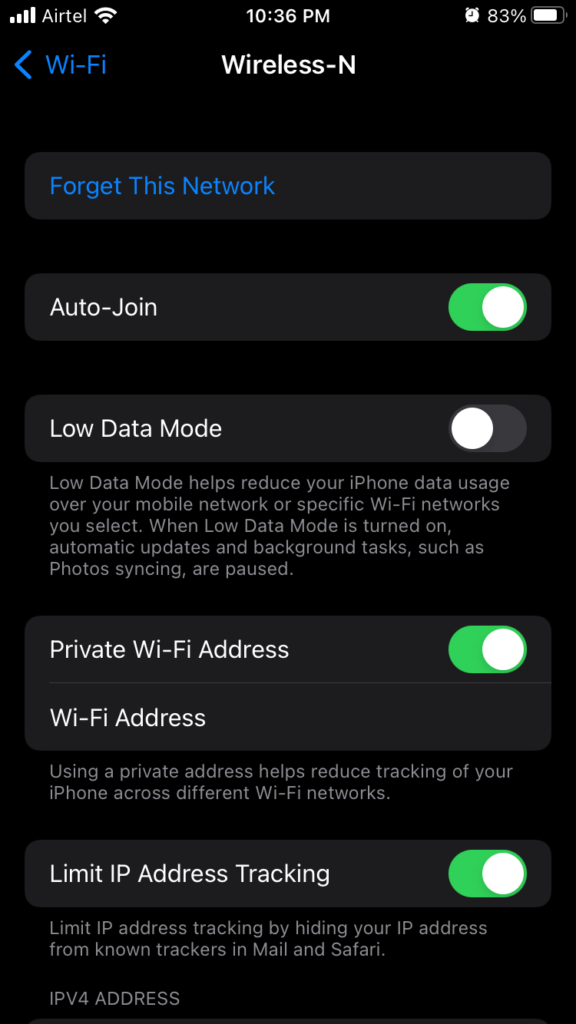 Now you have removed the internet bandwidth limitations in the smartphone and it won’t have problems streaming the content from one device to another device.

Many home users have multiple devices connected to the same network, and the Wi-Fi router has limitations. The manufacturer does say that the Wi-Fi can connect up to 100 devices, but there is a catch. The router has an algorithm that distributes the bandwidth equally per connected device.

Let us assume that your internet package download/upload speed is 100 Mbps.

The Wi-Fi network has six devices connected to it.

The majority of the Wi-Fi router distributes 25 Mbps bandwidth per device, it can cater to four devices only.

I have shared a screenshot of a Wi-Fi router product listing on a popular online store and it proves my point. 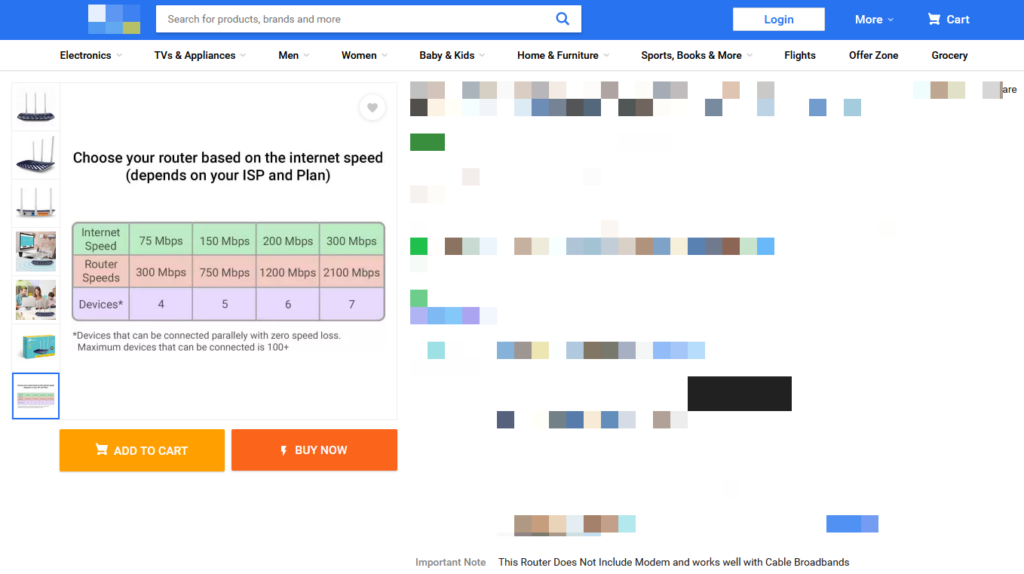 Remove additional connected devices from the router’s control panel or disable Wi-Fi in the Android or iOS devices.

1. Pick up your Wi-Fi router and turn it back to find the username, password, and login URL.

2. Go to the dashboard URL and enter the credentials to access the router settings.

3. Find “Status” or “Mac Filtering” in the Wi-Fi router to kick the devices.

My Wi-Fi router is eight years old, and it doesn’t have the feature to block unnecessary devices from the network. Change the Wi-Fi network password to resolve the issue instantly if you are in the same boat as me.

Shudder is a multi-million dollar company trying to survive in the competitive streaming market. They have a relatively small team but they are working efficiently to produce big-time platform-like results. Open the Play Store or App Store listing and update the Shudder app manually.
The official developers work behind the scenes to find a solution for the newer problems, and they release patch updates. The premium service provider has less than 25 employees in the house, and they have cut down the number of employees to maximize the profits. You can’t expect a team of 25 or less to do wonders in a short period. Users have to wait for the Shudder developers to release a patch update. 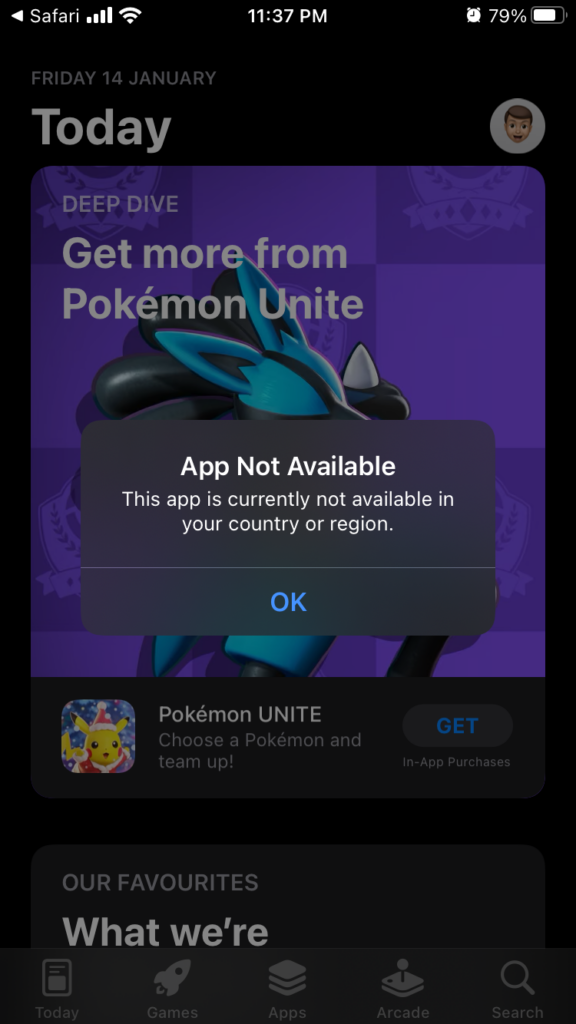 Shudder is a region-locked service, and it’s not available outside of the USA, UK, Canada, and Ireland. You can enjoy the streaming services for a cheaper price using a VPN network, but it’s not a permanent solution. Shudder team is working in the shadows to restrict the VPN users, and they have to take the action to prevent unauthorized viewers on the platform. Unfortunately, the official team may have released a patch that detected your VPN provider and blocked the connection.

We don’t have a choice but to wait for the support team to address the Shudder not working in Chromecast issue. In the meantime, you can try the Netflix or alternative solution for the time being, or you can wait for a while. You can use the Google Home app and duplicate the screen instead of to Chromecast device, but it’s a temporary solution. Let us know how you solved the Shudder streaming issues in the comment section below.