In 2019 Qualcomm faced fierce competition from its rivals in chip manufacturing, Hisilicon, and MediaTek. So this year, Qualcomm is trying to turn the tables entirely to their side by making significant changes in their flagship processor over the previous one. The improvement in terms of GPU, CPU, and AI this time around won’t be just a marginal on. That is, if actual performance in the real world holds to what’s there on paper about the new processor. We already shared the list of supported devices that will come out of the box with Qualcomm Snapdragon 865.

The previous shift was in terms of efficiency, moving from a 10nm(Snapdragon 845) to a 7nm(Snapdragon 855) manufacturing process. This time around, too, Qualcomm went with the 7nm process, with changes in terms of the cores that are used. So how big of an improvement is the 865 over the 855? Let’s take a detailed look at it to find out. 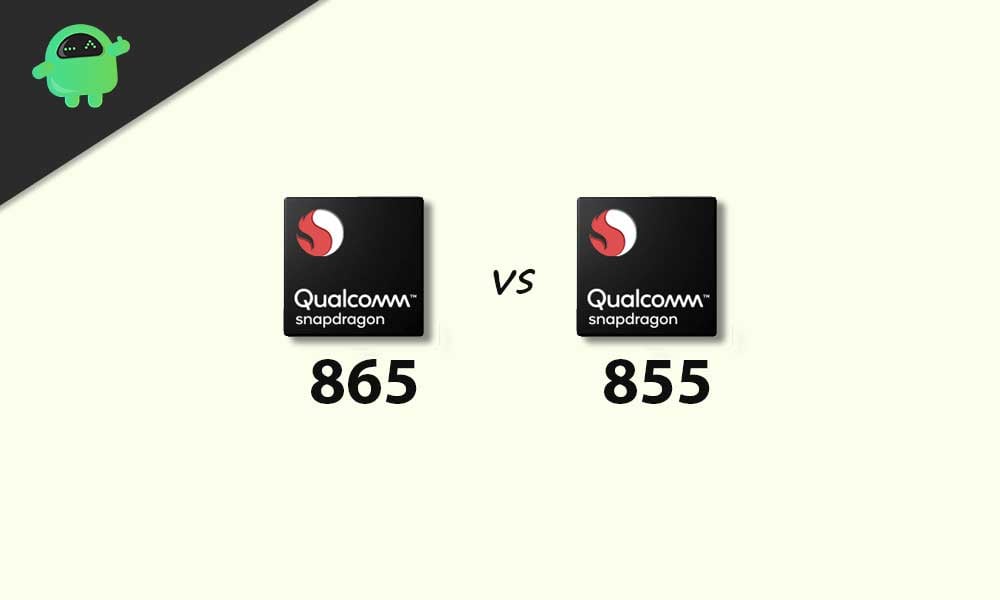 Well, here you will find the detailed review and difference between Snapdragon 855 vs Snapdragon 865.

Now Qualcomm claims a 25% performance improvement of the Snapdragon 865 over the 855 due to the change from Cortex-A76 to Cortex-A77. However, these are just claims and how much of a difference it brings to the table, which will be evident once we have retail devices running on the Snapdragon 865. Yes, as of now, there are a couple of devices running on Snapdragon 865, but these are still early days to judge how much of an improvement has been made in the performance department.

The Snapdragon 855 came with Adreno 640 GPU, which claimed a 20 percent performance boost and a 30 percent reduction in power over its predecessor. However, this time the Snapdragon 865 pulls even more forward with Adreno 650, which offers 20 percent of a performance boost over the Adreno 640. The Adreno 650 also provides support for 10-bit HDR gaming. However, the most significant change this time around is that Qualcomm has mentioned OTA driver updates for the GPU through google play store. Much like how we update our phone’s apps, we will be able to update our GPU too, which ensures longevity in high performance.

AI in smartphones is quite the norm now, and even the one year older Snapdragon 855 had a dedicated unit for AI tasks. These AI tasks include image scene detection, voice assistant functions, object detection, depth detection, and so on. Now Qualcomm is claiming a massive 50% improvement in AI for the Snapdragon 865 over its predecessor. This is quite the number considering this is just a single year improvement for the processor. On paper, Qualcomm claims that the Snapdragon 865 can perform 15 TOPS (15 trillion operations per second), which means a significant improvement in terms of real-time AI processing.

The Snapdragon 855 features the Spectra 380 ISP. It is capable of bokeh video recording at 60 fps along with a new HEIF codec, which allows saving photos with higher quality while maintaining a low size overall. It supports a still image capturing of up to 192 MP if the sensor can capture it. On the contrary, the 865 comes with Spectra 480 ISP, which can process 200 MP still photos. It also brings support for 8K recording, Dolby Vision Video capture, 4K HDR with 64 MP photos(simultaneously). Besides 8K, it supports 4K recording at 120 fps, and super slow-motion video 720p @ 960 fps.

So yes, the new Snapdragon 865 is better than the Snapdragon 855 in every way, and the improvements it has made in AI and GPU front is quite noteworthy. However, we will have to wait a couple of months to see how this new processor holds up in a longer-term against its rivals.