Sony is apparently planning to launch a new mid-range device which we believe is the Xperia XA3. This device has appeared on Geekbench and goes by the model name Sony H4493. There is a rumor that Sony Xperia XA3 may unveil at the upcoming IFA 2018 event. This release may take place on August 20th.

The handset in the discussion will run Android 8.0 Oreo out-of-the-box. Sony, as we know, is very sluggy in dropping system upgrades and now we are in the Android Pie era. It’s strange the OEM did not pack v8.1 Oreo. Getting Android P for  XA3 may take a lot of time. Below you can see the Geekbench scorecard of Sony Xperia XA3 which reveals some important info on its specs. 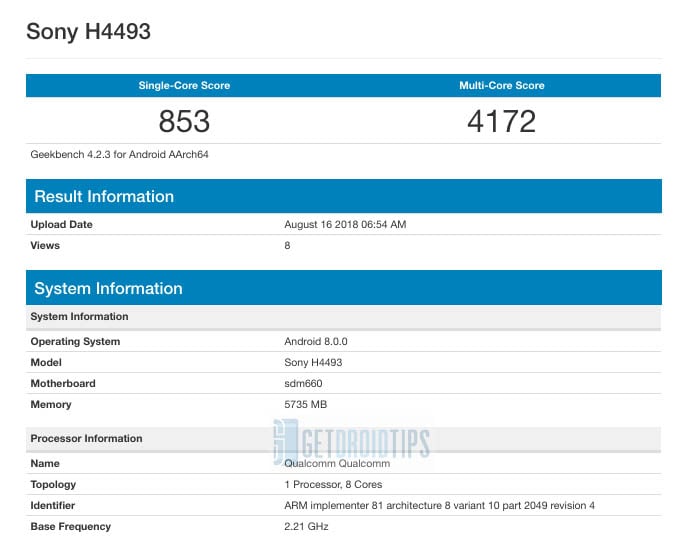 The upcoming Sony Xperia XA3 as you can see from the Geekbench scoresheet packs Qualcomm SDM 660 chipset which may be an upgrade over the Snapdragon 630. It will be an octa-core processing unit with 2.21 GHz clock speed. A 6 GB RAM will also accompany the hardware configuration. This device may boast a Full HD + display with thinner bezels on the edge. According to the latest hypes, we may see an 18: 9 screen to body ratio with a pixel resolution of 2160 x 1080. Now coming to the camera section, if we take a look the predecessor Xperia XA2, comes with no-nonsense 23-megapixel primary cameras. So, Sony Xperia XA3 being the follower, we may see a similar camera set-up on it as well.

Though the scores are not impressive on Geekbench, still we can expect an efficient mid-range from Sony. Probably this is the first time the Sony Xperia XA3 is going through the benchmark. So, it may need more polishing. Let’s wait for official reveals regarding Xperia A3 and see if it debuts at the IFA event.