VoIP (Voice over Internet Protocol) has long been the mainstay in business communications. The reliance on VoIP in the corporate world is virtually inseparable and grounded in such a way for good reason, too. VoIP has been the primary method of communications for the corporate world for the best of two decades and continues to thrive in a heavily digitalized world. Naturally, such necessity inevitably breeds supply, and in the case of VoIP, many companies quickly jumped on board to claim a shared stake. One such player in this field is the Axvoice VoIP internet phone service. 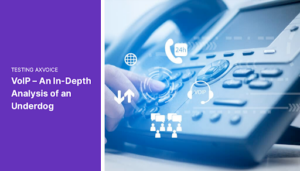 Axvoice isn’t a debutant to the VoIP world by any stretch of the imagination. This VoIP internet phone service has been a solid part of the landscape for a decade and a half and continues to grow strong. This longevity in the industry enables Axvoice to be not just a mature VoIP service provider but one with the pedigree to back it up. Axvoice was an early adopter of the technology and continues to function today. Perhaps the only difference in the company’s approach to the market is how it has ramped up its services in the residential space, effectively ending the ancient and lagging reliance on landline connections.

To convince American and Canadian households to move away from landlines and pesky Wi-Fi calling services, Axvoice positions itself as the de facto communication standard for all voice calling needs. It does this by including enticing residential plans and several other upselling points that the competitors fail to emulate. We tested this VoIP service provider and tried to understand why despite the industry longevity and attractive offerings, Axvoice remains relegated to the sidelines. Continue reading to find out!

If you’ve ever experienced a VoIP connection before, Axvoice would feel comfortably familiar. It isn’t a stretch to say that the company gets the basics right. In 2022, you shouldn’t compromise on these either. Axvoice claims to have more than 30 features, however. These features can be categorized further based on their perceived vs. actual utility. Since VoIP services have come a long way from their hay day, providers are keen to bundle everything and the kitchen sink just to make their offering stand out. Let’s see which of the 30 Axvoice features earn praise and which consumers wouldn’t care. 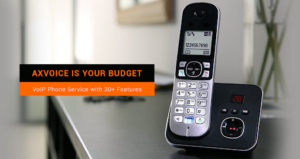 Axvoice has caller ID blocking, which is a staple among VoIP providers, a voicemail system, call forwarding, call log management, a failover system, do not disturb mode, and an online account management portal. Looks good so far. You can set up distinct ringtones for individual callers, have a call filter, and turn on anonymous call rejection or call waiting. The VoIP can even black-list specific numbers from calling your line.

One of the most underrated features of Axvoice is its ability to dial multiple formats of the same number. Most VoIP service providers only correctly connect calls if the correct digit format is entered. Some require seven digits, others ten and eleven. Axvoice can manage all three and provides users with an easy dialing experience without the fuss about the area or country codes. It can even block international numbers, provide custom music when a call is placed on hold and can have multiple alternate caller IDs too.

The features that may attract customers to Axvoice would be the free calls you can place to other Axvoice users, have Axvoice setup on existing unlocked VoIP hardware, and softphone support, which redirects calls to your phone, tablet, or computer. From the looks of it, Axvoice doesn’t waste time and effort on developing features that are fluff and unnecessary. All of the previously mentioned Axvoice features demonstrate perceived utility.

Axvoice has three distinct plans for residential, business, and international deployment. The residential plans are further divided into three categories:

This plan costs $8.25/month and has unlimited calls to all numbers in the US and Canada. Customers also get free hardware to set up Axvoice.

This plan costs $5.99/month and has 200 minutes on any number in the US and Canada. Incoming calls are free as well, and customers get free hardware.

This plan costs $4.99/month and is billed 1.5c/minute to all numbers in the US and Canada, with free incoming calls. Hardware is included in this plan too.

The special VoIP plans to meet your business needs are divided into two categories:

This plan costs $29.99/month and offers 1500 minutes to all numbers in the US and Canada. It has voicemail support, an online account management portal, and all of the extra 30+ features.

This plan costs $14.99/month and offers 200 minutes to any number in the US and Canada. Users can get Caller ID support, call forwarding, and conference calling in this bundle.

Finally, Axvoice has two categories for its international plans:

This plan costs $16.58/month and has unlimited VoIP calling to 45+ international destinations.

This plan costs $29.99/month and has unlimited calling to more than 60 international destinations.

We’ve been daily driving the Axvoice USA/Canada Unlimited plan for the past three months to understand why this VoIP isn’t the industry standard. A quick comparison of its prices to other competitors should make the case for anyone to pick Axvoice, so perhaps there have been issues with its performance, right?

We’re happy to report that our Axvoice connection worked just as well and failed just as well compared to our official Nextiva connection. The service is indistinguishable in performance from any free Android calling app. It has comparable softphone support too, which routes your calls to your devices if the internet connection is spotty. And we had a few bad days of slow internet too. The lags and disruptions we endured were the same on Nextiva. Most in the office had no idea we had two small business VoIP services connected at the same time. And you’d be hard-pressed to find any differences in the performance alone.

Logging into the online dashboard to view detailed call logs is the only giveaway. The rest is all the same.

What Can be Improved?

We’d be nitpicking if we found issues with the Axvoice service in terms of pricing and performance. A stutter here or distortion there can’t be the basis of the VoIP’s entire evaluation. Plus, these issues are ubiquitous among other service providers too. But one area where Axvoice could improve, and where its competitors have a leg up on it, is in the number porting process.

When we were signing up to Axvoice, we wanted the office’s existing number to be ported to VoIP. We’ve gone through the process before when shifting the office’s older VoIP for Nextiva, so the pains and wait times are familiar to us. But the crucial difference in our case with Axvoice was the exaggerated delays we experienced. Where other companies would have your number ported in 7-10 days after all the paperwork is sent off, Axvoice reps insisted their process would take 12-15 days. Naturally, that would’ve delayed the review by half a month so we opted against it. For businesses in a pinch and looking for a seamless transition from one VoIP to another, their porting could be a potential pain point.

The jury is still out on why Axvoice is still playing the little leagues when it has the resources, the packages, and performance to rival some of the heaviest hitters in the segment. We guess that Axvoice is serving the small-to-medium business (SMB) niche, which in all fairness is a great move on the company’s part. The market is there for the taking and Axvoice has the prerequisites to become a key player.

A little bit of streamlining and furthering their competitive pricing can land them in the big leagues too, but you won’t hear us complaining about that. We’re happy with Axvoice, and if you’re looking to save up on your existing VoIP connection, give them a shot.