Last year’s action-adventure role-playing game by Thorium, Undermine, allows you to take on the role of a peasant searching for treasure and freedom in perilous mines. Apart from that, you get to collect relics and upgrades necessary to take down powerful bosses in the game. One of the most powerful bosses in the game is The Seer, World’s Heart, who was introduced with the Golden Core update in the game. You will need a good strategy and apt use of power-ups in order to achieve victory.

In this all-new guide, we will show you how you can defeat The Seer, World’s Heart boss in Undermine. So players lookout for this one should look nowhere else as we have included the best elements that you are going to need in the fight. 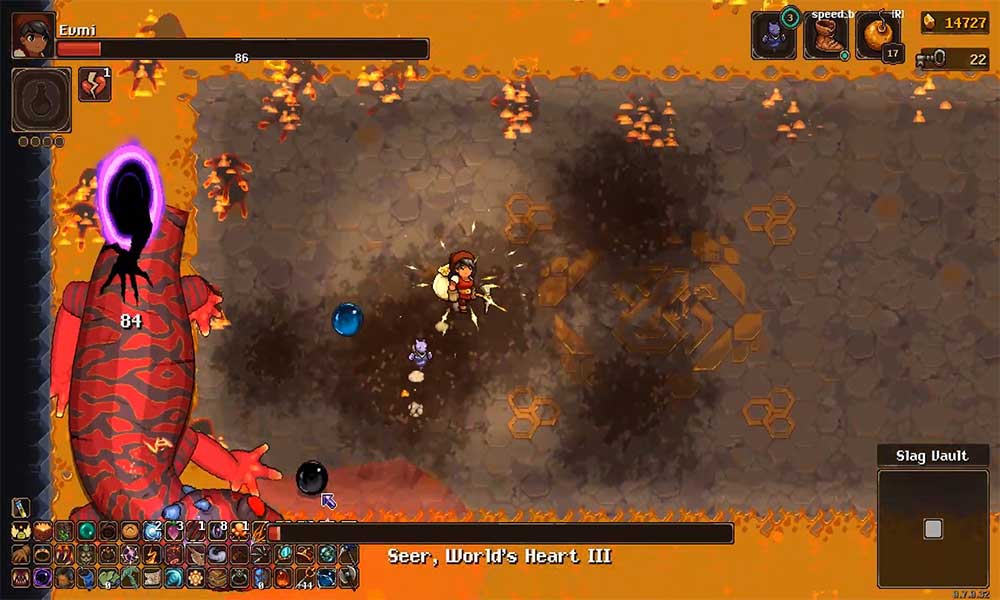 About The Seer, World’s Heart boss in Undermine

Seer is the final boss of Undermine, who is found on the last floor of the Golden Core. She is basically a gigantic red-and-black salamander minus the tail and crawls around the floor, leaving fiery footprints in her wake. If you come into direct physical contact with her or these footprints, you will be set ablaze. When you first meet her, and sometimes during the battle, her eyes will glow menacingly. Make sure you are not directly in front of her at this time, for she will spew forth fireballs if you are.

Apart from this, she also attacks you in the following ways:

Now that we have taken a look at the attacks that Seer has in store for you let us see how you can counter them and defeat her in Undermine.

Strategy for defeating The Seer, World’s Heart in Undermine

First of all, make sure you bring along all the items mentioned henceforth, for they are invaluable for achieving victory in this battle. Wet Blanket is one of the most useful items which will protect you from Seer’s burning touch. You can use Bombs to deactivate her protective cloud and Othermine Conduits for getting a solid start in the fight. The latter will start damaging Seer right from the beginning so that you can concentrate on dodging her attacks.

We recommend using melee attacks when Seer is stationary, versus ranged attacks when she is crawling around. Unfortunately, she cannot be bound by Selt’s Egg or Selt’s Blood. Galoshes are pretty useless in this battle as well, since anything associated with oil will go up in flames. However, Lava Walkers and Helios Boots will come in handy, consider the resistance to fire they confer upon you. You can also consider using the Chakram in conjecture with Sonic Boom when Seer unleashes her spheres or fireballs/avalanche of rocks.

Keep in mind that going all the way from the Gold Mines to the Golden Core can result in you losing so much health that you will not be able to fight Seer effectively. Therefore, it is better to avoid the Shimmering Caverns portion altogether.

Rewards for defeating The Seer, World’s Heart in Undermine

You will be rewarded with Seer’s Fragment, Thorium, and a number of recipes/eggs when you defeat Seer for the first time. A portal will then manifest and allow you to access a mysterious room to meet Death’s Head. Apart from this, you can also win the following achievements by defeating Seer:

That is it for now. We hope our guide helps you overcome this powerful boss in Undermine. If you liked this, don’t forget to check out our other Wallpapers, Windows Guides, Gaming Guides, Social Media, iPhone Tricks, and Android Tricks for more guides. Subscribing to our YouTube Channel will help you win the $150 giveaway contest. If you have any doubts or feedback, comment down below with your name along with the e-mail ID, and we will reply shortly. Thank you.