Asus hasn’t been up-to-date with the latest Android updates for sure since only one of the devices has got the beta while even the latest smartphones are waiting to hear about getting an Android 10 update. Anyways, Google announced and officially launched Android 10, the tenth iteration of the Android OS family, on September 3rd. The same day, Google Pixel devices and Essential phones got their share of the update while soon, other smartphone makers like Xiaomi and OnePlus have started rolling out the update across their flagship smartphones. Note that Google will name its Android OSes numerically henceforth since it has already crushed the dessert-based nomenclature after its inconsistency with universal recognition.

As per the timeline, OEMs will soon roll out Android 10 across their smartphones although based on priority and other factors. Furthermore, Asus hasn’t been vocal about Android updates off lately which means some of the smartphones might never get an update while others will get the update but we will have to wait until an official update is available. 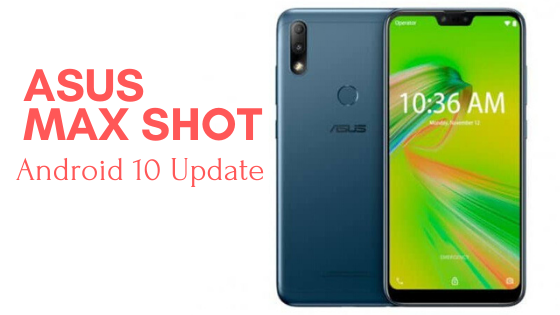 From being a budding OS, Android has grown immensely and currently holds more than 2 billion devices subscribed to its iterations where Android 10 is the latest and pushed with a tonne of features to try and check out. You can read more about the features you’ll get on Android 10 here.

Asus Zenfone Max Shot launched in March this year at a mid-range price tag. The device comes pre-loaded with Android Oreo 8.0 out-of-the-box which escalates its probability of getting bumped to Android 10 formerly known as Android Q. Asus hasn’t really intervened or provided any supportive timeline on Android 10 rollout except for Asus Zenfone 5Z which has already received the beta and will get the stable update soon or some of the users might have received it already.

Speaking about Android 10 on Asus Zenfone Max Shot, we are still a bit unclear about the situation although reports suggest that we can expect it to arrive on Max Shot by Q4 2019 to Q1 2020 where the latter seems more realistic than the former quarter.

Asus Zenfone Max Shot is a great phone with great specifications onboard. It has a 6.26-inch IPS display with 1080×2280 pixels resolution. Under the hood, the device is tied with a Snapdragon SiP 1 octa-core processor paired with 3 or 4GB of RAM and has 32GB and 64GB of internal storage options.

It has a single front camera setup consisting of an 8MP sensor while the rear is a triple-camera array of 12+8+5MP camera setup. The device comes with Android Oreo 8.0 out-of-the-box and has a larger 4,000 mAh battery onboard plus a rear-mounted fingerprint scanner and a 10W battery charging support and falls in a mid-range category.