Fallout 76 was launched on November 14, 2018, as an installment to the Fallout series. The game is riddled with many creatures, none more volatile than the elusive Wendigo Colossus. This guide will shed some light on the location of the Wendigo Colossus with the help of a map and how to defeat it. Fallout 76 is an online RPG that lets players explore an open wasteland that has been torn apart by nuclear war and is thronged with mystery. Players can control a customized character that is entrusted. With exploring the nuclear wastelands, which is the remnant of an earth-shattering disaster knows as ‘The Great War.’ Wastelanders was an update introduced that brought several changes into the game.

The primary objective of the game is to locate the Overseer of ‘Vault 79‘. It is a shelter house that supposedly houses the best minds remaining in the world. The Overseer is said to have gone MIA after the grand opening of the vault, referred to as ‘Reclamation Day,’ and the protagonist is supposed to track her down to find out what went wrong. The story develops across a region known as ‘Appalachia’ which is a distorted version of West Virginia, USA. So, let’s get started with our guide.

Finding The Wendigo Colossus In Fallout 76

Players will have to keep their spirits up. Spawning only occurs after dropping a nuke within this location in hopes that the chances of it showing up, which is 7%, are well worth it. It is advisable to check the map as soon as the atomic blast disperses. As players should notice visible ‘green dots’ that are scattered around the blast zone. These acts as markers to potential hotspots to where the Wendigo Colossus might be. And the only sure shot way to know for sure is to head out there and find out. Head to these markers and scan the area. If the Wendigo Colossus is nowhere to be found. Then keep heading towards the nearest marker until you are able to locate this beast. Players would need to keep going back and forth to clear these areas. 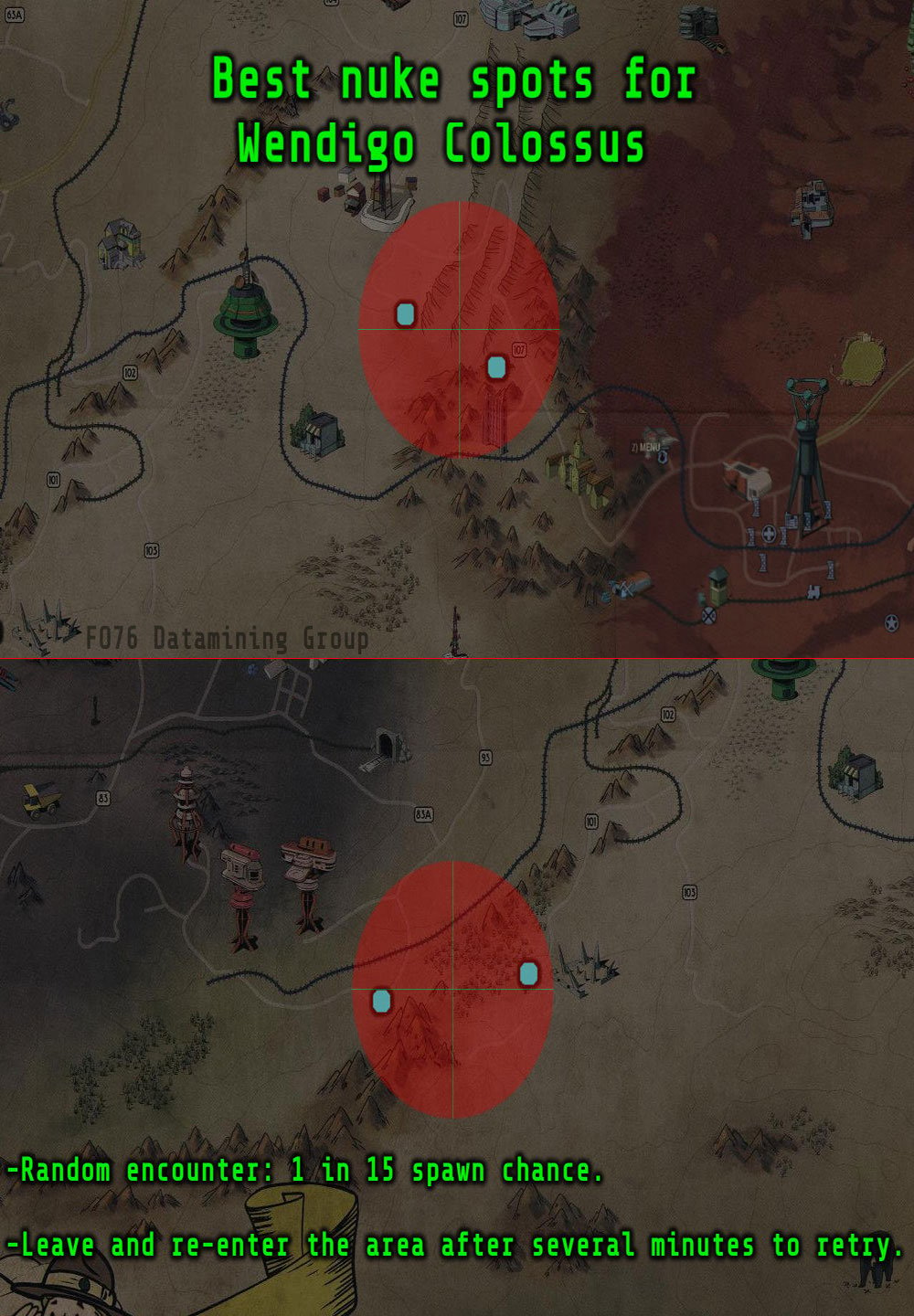 Defeating The Wendigo Colossus In Fallout 76

Respawns are said to occur around 5 minutes in the marker locations. So the players would need to be patient while searching for the Wendigo Colossus. For those lucky players who will eventually come face-to-face with the Wendigo Colossus will see how nasty this creature looks. Don’t let its appearance fool you as it is surprisingly quick on its feet and can take players out with a single hit easily. Not only is it a force to be reckoned with, it usually roams with a posse of other Wendigo Colossus’s that are close-by. In order to defeat this vicious monster, players are advised to team up and be equipped with repaired weapons. 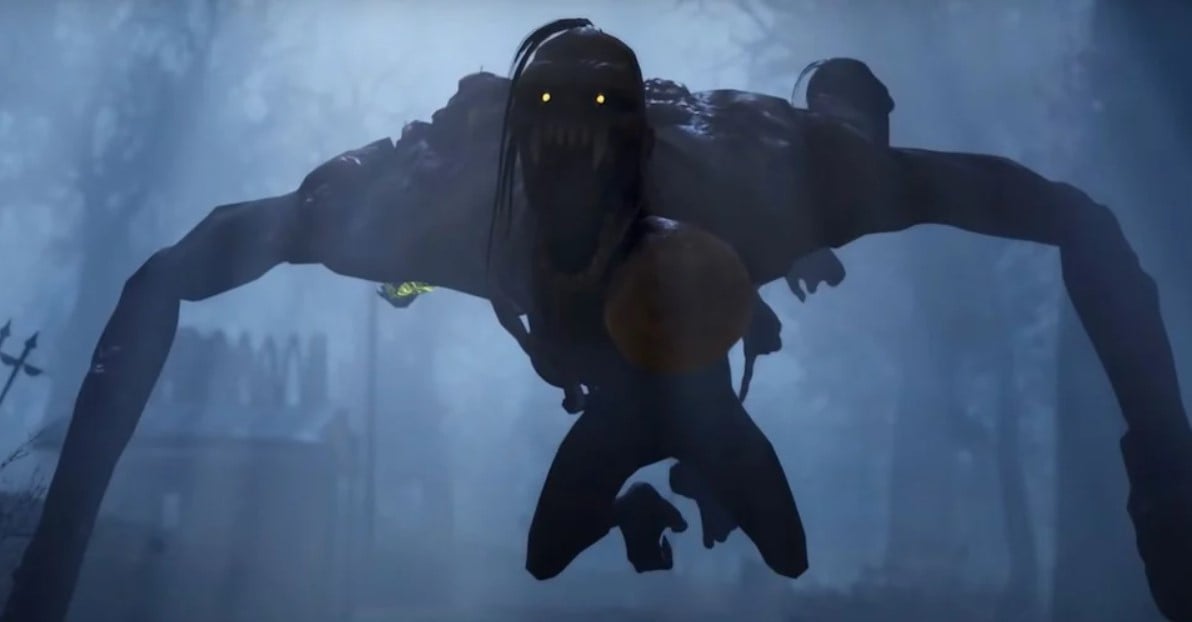 The Wendigo Colossus has three distinct heads with which it uses to hurl projectiles at the players;  a “corrosive head”, “a poisonous head”, and a “screeching head.” It is crucial to maintain a safe distance and fire a few rounds before retreating. The ‘corrosive’ and ‘poisonous’ projectiles will quickly eat through the player’s armor, and the ‘screeching’ head will disarm players as they run in fright uncontrollably.

Slowly chipping away at its health and then immediately running for cover is the key here. Without constant quick movements, it is comfortable to be surrounded by. And you will eventually be getting harmed by the poisonous and acidic projectiles. A good tactic would be to sneak around and behind the Wendigo Colossus and plug it a couple of times. The ideal type of weapon would be one that has a rapid rate-of-fire or any with additional explosives. The Wendigo Colossus will bend over and ‘roar’ every couple of minutes, which causes them to run away uncontrollably. This moment should be utilized effectively. As it provides some breathing spaces and allows for resource collections and weapons check. A routine hit and run gameplay should wear the Wendigo Colossus down and eventually topple it over.

Taking advantage of the corpse of the Wendigo Colossus will reward a player with some random items, but most remarkably, the ‘Wendigo Colossus Vocal Sac.’ This item can be broken down into acidic and nuclear material form. It is also likely that there is a chance that a player might find a God-tier weapon like the ‘Anti-armor Minigun. With such possibilities of precious loot to be discovered. This makes hunting and taking down the notorious Wendigo Colossus worth it.

This guide was to help the players of Fallout 76: Wastelanders, who were unable to defeat the Wendigo Colossus. After following our strategical guide, they should be able to beat it and claim victory. We hope this guide helped you. If you have any queries or feedback, feel free to comment down below with your Name and E-mail ID. Likewise, check out our iPhone Tips and Tricks, PC tips and tricks, and Android Tips and Tricks for more such tips and tricks. We urge you to participate in the $100 giveaway by subscribing to our YouTube Channel. Thank You.