New Update on Aug 25, 2020: It seems that more and more delay is taking place for the Asus Zenfone Max Pro M1. Even after several months of beta testing, the company hasn’t mentioned anything yet regarding the official Android 10 stable update for the Asus Zenfone Max Pro M1. Now, some of the reports are mentioning that the handset may not get ARCore support with the Android 10 update.

Meanwhile, some of the reports are also claiming that it won’t gonna support Slow-Motion video recording as well. Though the Asus Zenfone Max Pro M1 previously supported DCI 4K video recording on Android 9 Pie, it seems that the 4K UHD will be the only option on Android 10 so far.

However, there is no official confirmation available yet about this issue. But one of the moderators of the ZenTalk community forum has suggested downgrading to the Android 9 Pie version if users want to record 4K DCI videos on Zenfone Max Pro M1.

Recently, the handset has got the July 2020 security patchset update but there is no sign of stable Android 10 update. Although the Zenfone Max Pro M1 users can also use ZenUI port to experience the Android 10, it’s quite unfortunate that the Max Pro M1 users have to wait further. It’s been almost a year going to complete within a couple of weeks to the release of Android 10.

New Update on July 15, 2020: Asus Zenfone Max Pro M1 is one of the unluckiest smartphones because the handset is yet to receive the official stable Android 10 update. However, there is another good news for the Max Pro M1 users as a new ZenUI port based on Android 10 is ready to download. The information has been shared with the Telegram Group. You can check out the changelog below.

New Update on July 04, 2020: Asus has released a new software update for the Zenfone Max Pro M1 (ZB602KL) model two days ago that bumps up a new software version ZB602KL_WW_17.2017.2006.429 based on Android Q. It not only brings the Android 10 version but also offers plenty of bug fixes and other improvements like updated security patch, fixed fingerprint can’t be set, fixed the latest Android P image can’t upgrade to Android 10 issue, etc.

Make sure that the update isn’t for the JP SKU and based on the Android 10 AOSP Developer Version. There are some known issues as well like ‘when occurred unexpected password key in request during upgrade to Android 10’. The firmware OTA update weighs 1.67GB in size and you can download it here if you want to manually flash it.

New Update on June 15, 2020: Recently, fake news appears on the web that the Asus will gonna release the official Android 10 stable update for both the Asus Zenfone Max Pro M1 and Max Pro M2 models. The duo has received the Android 10 beta previously and still running on it. All the Zenfone Max Pro M1 users should know the truth that there is no official confirmation available yet.

While talking about the fake news, it claims that both the Asus Zenfone Max Pro M1 and Max Pro M2 models will receive the Android 10 stable update on June 20, 2020, via batches. But it seems that the news is wrong and manipulating the users. Asus has mentioned not to fall into these traps and keep checking the official channels for any announcement or release notice.

New Update on May 4, 2020: The Taiwanese OEM Asus is almost ready to roll-out the official stable Android 10 update on Asus Zenfone Max Pro M1 models via FOTA. It’s expected that the update push will start very soon as the announcement has been confirmed now officially. This will come with a software version 17.2017.2004.424 that includes the Android 10 AOSP Software Image developer Version. So, it gonna be some kind of final beta update over Android 10.

Because the developer version not gonna be stable what it should be. It’s also worth mentioning that the particular update is available for the WW SKU unit only. Therefore, those who have the Zenfone Max Pro M1 WW SKU version with the software version WW-16.2017.1910.059 & WW-16.2017.1912.060 (Android Pie) will be able to receive the OTA update as of now.

Whereas if you’re using the .063 and .061 Pie builds on your Zenfone Max Pro M1 model or even running the Android 10 beta .407 version, then you may need to wait for a while. Asus has also included plenty of improved features in this update. Check out the full update changelog below:

1. Android 10 upgrade.
2. Please be aware that installing this system image on a device removes all personal data from the device, so please remember to back up your data first.
3. This is the Android 10 AOSP developer version, so the user experience will be different from Android 9. If you are used to and prefer using Android 9, we recommend that you continue with the Android 9 version.
4. Updated Android security patch
5. Fixed fingerprint cannot be set issue
6. Fixed latest Android P image cannot upgrade to Android 10 issue
7. Fixed user can’t hear low-frequency sounds issue
8. Fixed fast charging not working issue
9. Fixed Arena of Valor without high frame rate mode issue
10. Improved sound quality at Media and notification sounds
11. Fixed Netflix no HD (Widevine L3) issue
12. Fixed lock screen wallpaper issue if the user sets different pictures for the wallpaper lock screen, and double-click to wake up
13. Fixed text display issue of APP name

As we’ve already mentioned that it’s a developer beta update, it has some known bugs as well. Take a quick look below.

⁻ Electronic Image Stabilization(EIS) for video recording function has no effect
⁻ Fingerprint options in Settings may disappear randomly after the system upgrade
⁻ When occurred unexpected password key in request during upgrade to Android 10 please follow the link below to recover the system.

Now, if you’re interested in trying this developer beta update on your Asus Zenfone Max Pro M1 Global WW SKU only device with the mentioned firmware version, then go below and download the firmware. The installation steps will be the same. (Source)

New Update on April 28, 2020: Due to the unexpected test results, Asus has halted the official Android 10 update for the Asus Zenfone Max Pro M1 model. For the last couple of months, Asus is cooking the latest stable Android 10 for its one of the best-in-class all-rounder budget smartphones none other than Max Pro M1. However, things went wrong in development, and right now one of the Asus executives has mentioned that it may take time for both the Max Pro M1 and M2 models.

Meanwhile, the Asus Support team has also confirmed that the Android 10 upgrade plan has been postponed till the end of April 2020 and the lack of improvements in development, we may have to wait further.

All the Asus Zenfone Max Pro M1 handset users should rejoice as the company has released the latest Android 10 update with a software version 17.2017.1911.407  which weighs around 1.6GB in size. At the time of writing this guide, the Android 10 update is live in India and France.

While the rest of the regions will soon receive this update via batches. But the ZB601KL/ZB602KL model users don’t need to wait for a long. As you can Download and Install Android 10 Update on Asus Zenfone Max Pro M1 from here.

Though the handset isn’t a part of the Android One program and almost 2 years older, Asus has delivered the Android 10 update which is really appreciable. This update brings Android 10 OS with improved system UI and enhanced system security as well. Here we’ve provided all the requirements, download links, and installation steps. Now, head over to the device overview if in case, you can’t remember it. 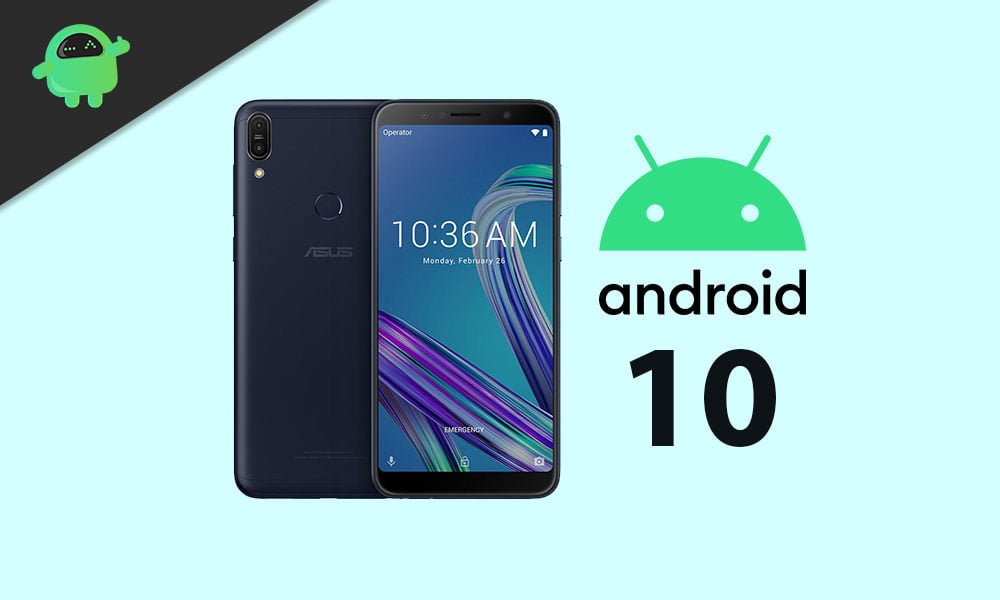 Google has announced the official Android 10 version in September 2019 which is the latest and 10th-iteration of Android OS. It brings plenty of new and useful features and improvements that you’ll miss on Android 9.0 Pie. Obviously, the Android 10 is the successor version of the last-gen Android Pie.

Now, without wasting any more time, let’s jump into the steps below. But make sure to follow the download links and requirements at first.

GetDroidTips won’t be held liable for any type of damage or error that occurs on your device by following this guide or installing any file. Proceed at your own risk.

That’s it, guys. We hope you’ve found this guide pretty useful. If you’ve any queries, let us know in the comments below.