The most common assumption made by people when their smartphones aren’t charging is that either the battery is damaged or the charger is faulty or damage but trust me, there’s more to the story that just these two potential reasons. Your phone works with the help of software and hardware components in which, there are components and pieces of software dedicated to the charging feature of your smartphone. If there’s something causing interference in this charging feature or any component related to it is faulty or damaged or undergoing any temporary issue, your phone might not charge.

We came across one of the sought after problems with Alcatel smartphones i.e. it’s not charging problem and decided to proceed and provide our readers and whomsoever is looking to fix it. We have compiled a comprehensive list of all the possible fixes and troubleshooting hacks that you will find helpful in the long run. 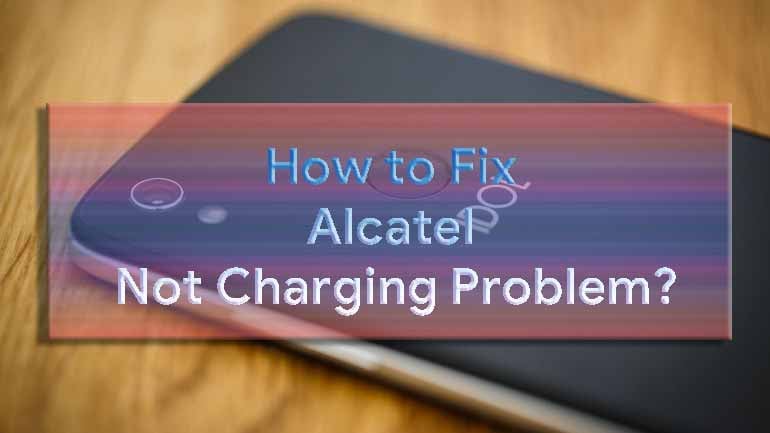 How To Fix Alcatel Not Charging Problem?

Let’s first tackle the possible software tweaks and fixes that will enable you to fix any software-related issues.

Power is drawn is less than power being used

It is possible that your phone is using too much power from the battery while it is simultaneously drawing power from the charger which might be less than the power being drawn out. This will cause the battery to deplete even though you have connected the charger to the phone and thus, you might misunderstand it for not charging problem. If you are doing the same, close all the apps opened and let the phone charge itself. You can enable airplane mode to enable faster charging. Also, check for any power hungry apps and services running in the background as it will cause the phone to lose battery sooner than it is being recharged.

When you connect the charger to the charging port on your phone, the driver installed in your phone detects it and then, other components are involved in recharging the battery. But what to do if you connect charger but the phone isn’t detecting it? This could be a minor software glitch and doesn’t need any rocket science to fix. Simply reboot the phone and the phone will resolve the temporary issue by itself.

The Alcatel not charging problem that you have been facing on your device could be an apparent or gradually occurring issue. You can proceed with other troubleshooting fixes that we have mentioned below. If the charging problem on your phone was apparent, check if you recently downloaded an app as it can create conflict. You can also check for already installed apps as these can still cause conflict. In such case, you must uninstall the recently downloaded app and check if the phone charges or not.

It is possible that bugs and errors introduced by outdated apps might have caused the smartphone’s capability to recharge the phone. It is recommended to keep all the apps updated which is easy for Android-enabled Alcatel smartphones as it comes with auto-update feature. First, open the Google Play Store, go to ‘My apps and games’ and check out the list of apps with updates available. Click on ‘Update’ button in front of all the installed and downloaded apps to do the same. Further, select the ‘auto-update’ feature for which, the option is available on the top-right corner of the screen.

Outdated Android firmware is like a breeding ground for errors, viruses and a bunch of other potential threats. When you update the firmware of your smartphone, you are actually getting more features and fixes for all the bugs that were discovered either by users or developers with respect to the previous firmware version. You can go to ‘Settings >> About Phone >> Software Updates >> Check for updates’ to find and install software updates.

Check if any third-party app is creating a nuisance

Just as any app can cause conflict with the phone’s capability to recharge the battery, third-party apps can have an adverse effect if they introduce bugs and if the apps are non-trusted. To check if any third-party app is causing the problem or not, you can slide into the safe mode on your phone which is the diagnostic phase where the user can check if third-party apps are causing the not charging problem or its due to pre-installed apps or any hardware function. It’s simple to understand that if the phone doesn’t detect charger even if it is connected while in the safe mode, it is possibly due to a third-party app. But there are several other hardware-related reasons why a smartphone doesn’t charge and we have stated all the possible reasons here.

What if there’s any hardware-related problem?

Clean debris from the charging port

Also, if there is debris or lint or dust trapped inside the socket which is highly probable, the phone will either charge slowly or not at all. Take a sharp object like a needle and gently ride it across the walls of the socket and try to scope out the debris. But if you can stop that the metal tab is deformed or the interlocking mechanism between the metal tab and the cable has worn out, you will have to get it replaced. Before proceeding, do check out all the further troubleshooting techniques to confirm the culprit.

Switch to a different power source

It’s time to play switcheroo with the adapter and the cable where the latter will be the next method. Talking about the adapter, it is possible that the adapter that you were using has become defunct or damaged or connections of wire on its IC have deformed. What you need to do is switch the old adapter with a new old, you can use your friends or family member’s adapter to check if the phone detects and charges the phone or not. Note that this is also one of the most observed reasons behind phone not charging problem.

You tried switching the adapter but the phone is still not charging, what to do? Well, its time to switch the USB cable which is prone to twisting, twirling, cuts, scratches, and all sorts of other problems due to which, the cable is unable to connect the phone with the adapter. Check for visible signs and if there are any, use an alternative cable to check if the phone detects it or not. If there’s problem detecting even the new cable, try it with the new adapter and try to narrow down the culprit. If nothing works, it is either the battery which has damaged or its due to any other hardware-related issue that needs a technician’s help.

The lithium-ion batteries that all the smartphones use to power the components have a specific recharge lifecycle after which, its performance depleted gradually. If the battery is old or damaged, it might not charge to its full extent or not at all. Get help from a technician and scrutinize if the battery is damaged or not. If yes, get a replacement and solve the problem.