Your iPhone XS Max getting stuck on Apple logo or any other screen at any time means that it has frozen and it can usually occur due to issues with the applications, cache, software bugs, corrupted files, bad updates, etc. This problem can boil down to a serious major issue if not taken care of. Since the screen is frozen, you won’t be able to do anything on the display since it is stuck on startup. Even if it does start up and freezes again, it is not possible to retrieve it by just keeping it idle since the system has gone overworked or overloaded causing it to freeze and become unresponsive.

Several troubleshooting methods can be applied to bring the iPhone XS Max stuck on Apple logo or any other screen such as you can perform a forced reboot as the first line of defense. If that doesn’t work, you can proceed to other methods like updating the system and apps, upgrading the firmware, clearing and deleting corrupted memory, cache, etc. Note that even after complying with the methods prescribed below, the phone is still responsive, it is time to take to the nearby professionals to check if there are any hardware damage or not where the display or the motherboard could be the most potent components to get damaged due to prolonged failure or other reasons. 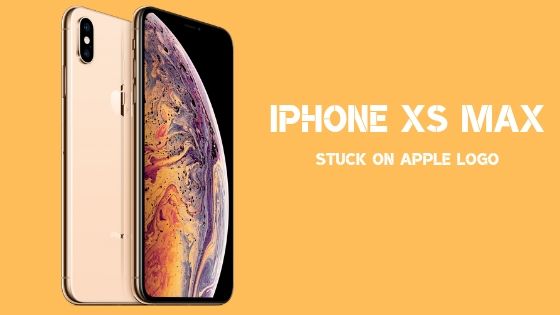 How to fix an iPhone XS Max that’s stuck on Apple logo?

Minor glitches might not affect the integrity of your iPhone XS Max but what if those minor glitches occur several times a day for months, it will escalate eventually. Usually, phone’s screen freeze when they are subjected to overload or when the memory or the cache is used is corrupted or bugged in some way trigger the phone to fall back in an unresponsive mode that could endanger the storage if not checked upon. The usual soft reboot would not help in such cases as the phone won’t let users use the touchscreen and that is where forced reboot comes into play. Although all unsaved work will be destroyed, no other data will be lost for sure.

Method #2: Update all the applications

This might sound strange since your phone is already in a ‘stuck at Apple Logo’ mode which means it is unresponsive and the screen is frozen so how can you update all the applications. Well, this particular method can fix the issue even before it occurs and thus, it is more of a preventive measure that the method to fix this issue. Once you can force reboot the system, proceed to the Apple App Store and check which apps including both bloatware and third-party install require an update. You can command the system to update all the apps at once or one-by-one depending upon your needs.

Updating the applications is imperative because it provides a layer of safety and security for apps against any intruders, bugs, etc. Every update comes with a patch that fills any loopholes as bug fixes while new features, UI changes are part of the update as well. When shunned from, outdated apps will simply cease to get any changes or security against bugs and thus, these apps become a vulnerable target of exploiters and hackers that can dive into the system to either steal data or damage, etc.

Unlike Android, iOS users are blessed with frequent updates almost every month although not everyone is keen on updating their phones. However, an outdated firmware can weaken the system’s resistance against unwanted bugs, malware, viruses, and even hacking attempts and exploits similar to how having outdated apps increased the problems. Thus, it is ideal to update the system and check if you ever end up with iPhone XS Max that’s stuck on Apple logo and other issues. You can check out available iOS firmware updates via Settings >> General >> Updates.

This method will mark everything on your device may it be files, docs, photos, videos, audio files, contacts, etc, all will be gone. You can take a backup of the required data if your wan and proceed with the step-by-step troubleshooting guide on how to perform a restore factory using iTunes on your iPhone XS Max.

This particular method is the same as the last method to restore the iPhone to its original factory settings, however, it uses the recovery mode instead of connecting to the iTunes via USB cable or lightning cable. The schematics are the same here as well, you’ll need a backup of all the data beforehand and then only you can proceed further.

If you have tried clearing app cache as well fix any bad updates by updating the apps with the latest updates (if available) as well as update the iOS firmware or have undergone a series of methods mentioned above, it is time to call in the big guns. This is because you can’t rely on a phone whose screen freezes abruptly because it could kick you off the rails when you need it the most. Although screen freezes can be overturned by performing a forced reboot while a master reboot must

Still not satisfied with the resolution provided? Get in touch with us at GetDroidTips and let’s see what else could we do to unroot the iPhone XS Max stuck on Apple Logo issue.