The Internet has changed things a lot and that is what we as humans are addicted to without any doubt. On your smartphone, you can either connect to the internet via mobile data or you can connect to a Wi-Fi network and zoom across the web without any hassle. One of the great features that come with iPhones is its personal hotspot which was formally introduced with iOS 4.3 and the feature is still in use widely across the globe. Personal hotspot lets you connect to your iPhone or iPad to a portable Wi-Fi access point which is nothing but a different device that you have enabled personal hotspot and bingo, you are able to use the internet after connecting to the hotspot which is handy if you can’t find any Wi-Fi signal around or it is not reliable.

One of the biggest benefits of using a hotspot is that you can iPhone’s mobile data to access the internet on iPad or vice versa. In India, iPhones have personal hotspots available although with certain limitations unlike Android smartphones that have hotspot feature and can connect or seek connection from any device may it be a laptop, PC, iPhone, iPad, Mac, etc. Outside India, iPhones either have hotspot fully available or this feature is tied with carrier’s service and thus, you need to have personal hotspot included in the plan to use it or else, the personal hotspot missing from iPhone is not a bug as reported in iOS 9. 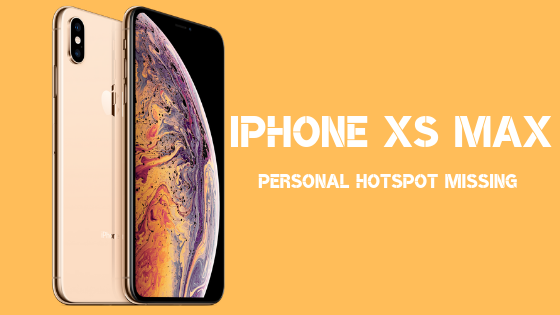 I have consolidated a few methods that will help fix the problem as I will be targeting each and every aspect to eliminate the obvious before narrowing to the culprit and hopefully, it will work for your iPhone XS Max as well.

How to Fix Personal hotspot missing from iPhone XS Max?

This is the most common thing that could happen if you recently signed up for a new plan with your carrier. In many countries, you have to specifically show if you want to use the Personal Hotspot feature or not. If you haven’t selected it yet, either the option could vanish until activated or even if it is available at your disposal, it won’t work. To sort it out, you can simply call the carrier and ask for assistance whether the feature is included or not. If yes, then it is probably a technical issue that will require troubleshooting that you can read it. If the feature is not included in the plan, you can upgrade to a newer plan and probably the hotspot feature will start working again.

Method #2: Check if there’s an issue with mobile data

Toggling cellular data or mobile data on your iPhone XS Max can work wonders at time. For this, you need to toggle it OFF since either the internet is not working or there’s no personal hotspot feature visible. Now, reboot the phone and then, turn ON the cellular data via Settings and this must restore the problem. Another major issue with cellular data is that there could be intermittent issues with the carrier you are subscribed. Call them and ask if there’s any problem on their end and get it resolved.

Method #3: Verify whether your plan has hotspot or not

This is the most common thing that could happen if you recently signed up for a new plan with your carrier. In many countries, you have to specifically show if you want to use the Personal Hotspot feature or not. If you haven’t selected it yet, either the option could vanish until activated or even if it is available at your disposal, it won’t work. To sort it out, you can simply call the carrier and ask for assistance whether the feature is included or not. If yes, then it is probably a technical issue that will require troubleshooting that you can read it. If the feature is not included in the plan, you can upgrade to a newer plan and probably the hotspot feature will start working again.

This is like a magic wand that eliminates any issues with the phone while relieving it with the strain and stress that apps and other processes put on the processor and other components which can often result in screen freezing or performance issues as well. This particular method can help resolve the missing hotspot issue as well and thus, it made it to this list without any further ado.

Okay, this is reserved for a handful of users encountering ‘personal hotspot missing from iPhone XS Max’ issue since it might not work every time. For this, you need the SIM card ejection tool to punch in the hole to remove the SIM tray. Next, you need to reboot the phone and then, insert the SIM card again as this must have reset the feature by now.
Next up, wait until the signal is back up and go to Settings >> General >> Cellular to turn it ON or toggle it a few times. Note scroll the page to check if the Personal Hotspot page is visible or not.

Similar to how Apple rolls out an update to fix issues with its iOS, your carrier releases updates too which register automatically but in case if the update doesn’t go through automatically, you might end up getting certain disruption in the service although not every time. You can check out if the carrier has released any update or not via Settings >> General >> About.

It is not rocket science that bugs can cause a string of issues without any doubt. Now, if you are encountering personal hotspot missing from iPhone XS Max issue on your device, a software update might come to the rescue. The thing is, Apple usually updates the iOS firmware every other month where it patches any bugs discovered either by Apple itself or developers and users using the last firmware version. The update also brings optimization and performance enhancement as well which is what makes it an imperative measure to take if you are facing any issues.

Before commencing, keep the phone’s battery at least 50% charged. Launch the Settings app on your device and proceed to General >> Software Update. This page will showcase if there’s any update available or not. If the page shows any update available, download the file and install it and probably reboot the phone so that all the changes can take place seamlessly. On the other hand, if there’s no update available, I advise you to follow any other method to verify if the missing feature comes back online or not until Apple releases an iOS update.

Let’s say that you recently updated the iOS firmware to a newer version. If the feature is not visible after the update, either this could be a glitch that others or at least few if not all must have encountered and must have taken it to Apple forums and other sites discussing it. On the other hand, it could be a technical glitch on your end as your iPhone XS Max ended up hiding the feature temporarily when you updated. On the flip side, it is possible that a bug or glitch might have occurred since you didn’t update the firmware.

According to my knowledge, this might occur if you have missed several updates so you need to update the iOS firmware and check if this makes any difference. To check out if there’s an update available or not, go to Settings >> General >> Software Update. If there is, download the update file and install it.

Method #8: Turn ON & OFF Airplane Mode

Airplane Mode or say Flight Mode can work wonders since it is a breakthrough feature that although is useful to restrict any cellular and other incoming and outgoing networks temporarily, it can have the resonating impact of other aspects of a smartphone too. No doubt we recall it when there’s a problem with cellular data or Wi-Fi or if the phone is unable to sustain the quality cellular network and so on.

If the personal hotspot is not visible or if it’s visible but not accessible, try toggling the airplane mode to verify if it makes any difference. Launch the Control Center and tap on the Airplane Mode icon several times. Walk into the Settings app and examine if the hotspot is working or not.

This is a trusted method and must work in a majority of cases if not all. It is possible that the network settings have gone haywire or there’s invalid configuration causing the personal hotspot missing on iPhone XS Max. The method is quite simple and wouldn’t take more than a minute to complete. You need to step into the Settings app and proceed to General >> Reset >> Reset Network Settings. You may be asked to enter credentials to confirm so do that and it is done. Simply reboot the phone and verify if the missing feature is back online or not.

There could be a hardware issue with any corresponding component causing the personal hotspot to go offline although the probability is that there will be other features that will go offline along with it as well. If that’s the case, think about visiting a nearby service center to get the phone scrutinized and get it resolved if indeed it is a hardware issue. On the other hand, it could be a software-related issue that you weren’t able to fix using any of the methods aforementioned so you’ll need a professional’s help for that matter.