If you are here, then probably you have heard about Linux and its abilities before. So now you might be wondering if you can run this ever-popular on your Android Smartphones. The answer to this question is yes, you can run Linux on your Android devices with ease, but of course, you will not be able to extract the full potential of Linux through your Device. The main reason behind this is Mobile devices come with weak processors that cannot perform those tasks that a computer can execute. But the Linux on Android can perform most of the tasks if not all you throw at it with confidence. Now we will start on with the installation of Linux on Android Smartphones. 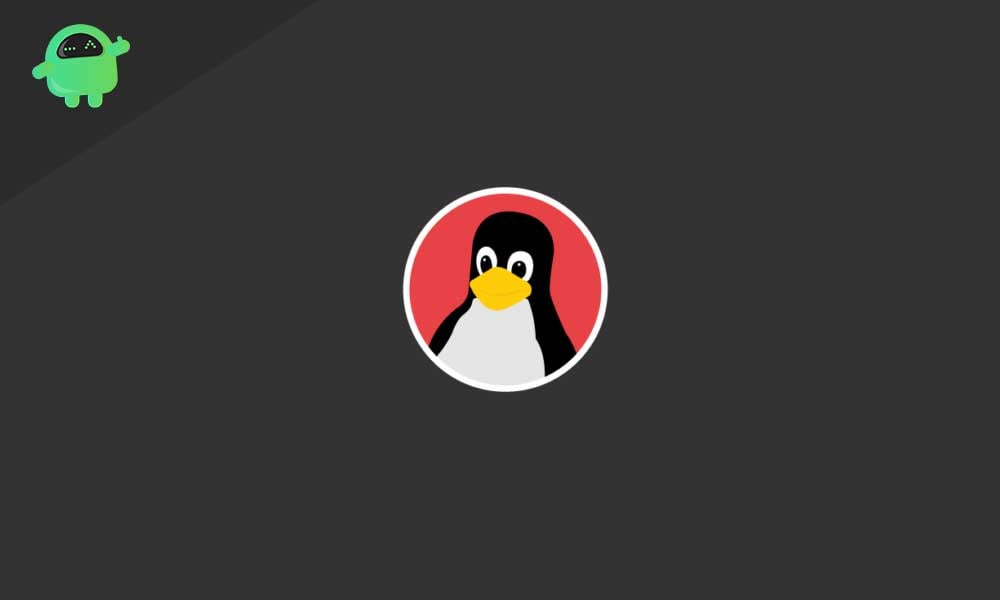 Why Install Linux on Your Android Smartphone?

Well, before starting off, we would like to tell you that Android is actually a Linux based operating system since it is built on the Linux Kernel. So most of the elements in Android are form the house of Linux. The kernel basically allows the operating system to interact with the hardware of the mobile, in simple terms.

The main reason for anyone to install Linux on their Android Smartphone is the fact to use other applications that are available only on desktop computers, as well as many users, want to use the full-blown terminal of Linux, which is considered the best command-line interface in the world of operating systems. Others may want to reuse their old android device to turn it into a more useful device. Well, there are many reasons for the users to install Linux on their Android Smartphones. However, the only problem you can face is the inability to multitask simultaneously.

Can Your Android Smartphone Run Linux?

To install Linux on your Android Smartphone, you have many choices available. The only thing that matters is your phone is rooted or unrooted. If you have an unrooted device, we recommend to root it, to enjoy the full efficiency from Linux. Else, if you wish to continue with an unrooted device, it’s your choice or a matter of device warranty. Eventually, in both cases, you are capable of running Linux on your Android Smartphone. We will below list the options that are available for rooted as well as an unrooted device to run Linux.

To install Linux on your Android Smartphone without root:

For installation of Linux on a rooted Android Smartphone:

How to Install Linux on Android Smartphones?

Run Linux on Android without Root

Now we will see the installation and running of Linux on unrooted Android Smartphones.

The best thing about Debian Noroot is that it will let you install Debian Buster on your smartphone along with a compatibility layer on top. This will allow you to run Debian applications without rooting your smartphone. Although performance is not that great on Debiat Noroot, it is still usable and because your Device is unrooted.

The best alternative to Debian Noroot is using the UserLAnd application. It offers choices of distribution of what you want to install. In addition to several distributions, it also offers to let you install apps of Linux.

You can install tools like Firefox, GIMP, and LibreOffice before installing Linux on your Android device. You can run this app by merely allowing the permissions it asks for then install the distribution of your choice. There is also an option of using Linux over command line and remote desktop. After all, you will love to use it because of the simplicity it offers. If you are searching for the best solution for running Linux on a non-rooted Android device, this is probably the best.

This application contains a total of 8 distributions of Linux that are even modded to fit the requirements. You just require an Android device with an ARMv8 chipset or later to proceed with this. You simply need to run the application, then choose the distribution and then click on Install. AndroNix is free to use but contains some irrelevant ads that can be removed by paying them a small amount, but that also unlocks some other great features that you may require some additional time.

Run Linux on Android with Root

Now we will look at the process of installing Linux on an Android smartphone that has superuser privileges or is rooted. You will see that running Linux on a rooted Android device is much better than on a non-rooted one.

Firstly, you need to open BusyBox to ensure the root capabilities are enhanced to max. Then open LinuxDeploy, and you will be able to see the available distributions. Click on your desired option to install. You will have options like Gentoo, Ubuntu, Fedora, and Debian. However, many more are there, and these are the most popular once.

You will then need to enable the GUI option to view your Linux Desktop on your Device. Also, look out that VNC is selected in Graphics Subsystem. Finally, set up your User Name and Password. Now come back from this system. Then tap on the three dots at the top-right corner and click on Install, followed by OK. 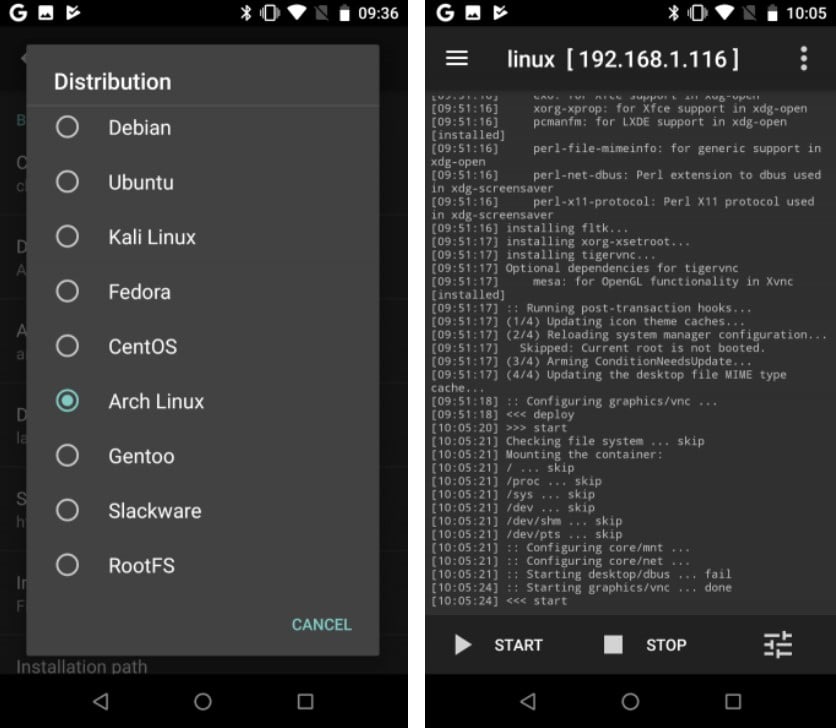 When completed, install VNC Viewer from this link. Now again open LinuxDeploy and click on Start to run your Linux. Then open the VNC viewer app and connect to “localhost:5900” to view your desktop using the username and password you entered. 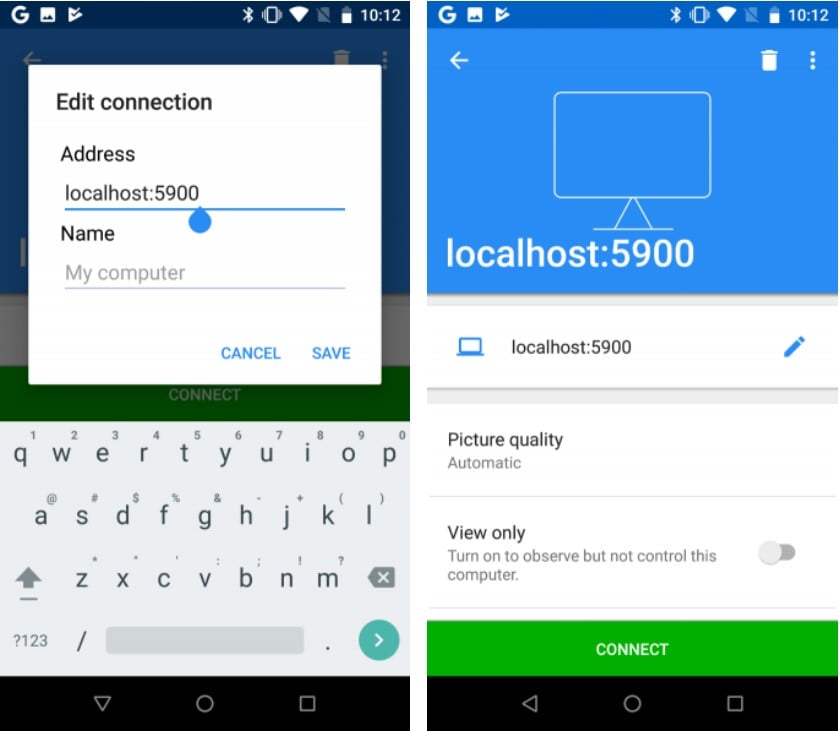 The LinuxDeploy method we used above will be used to install Kali Linus on your Android Device. Just before starting off with LinuxDeploy, in the distribution section, click on Kali Linux, and then you are done with your Pocket Hacking Device. In Kali Linux, you will probably find the best injection and penetration Softwares that are capable of doing anything, starting from network penetration to CCTV hacking. Though it is illegal, you can have some fun with your friends instead. You can also use to check the safety of any network that you are connected to.

This guide was to help Android users who want to install and use Linux in their smartphones. We hope you find this guide helpful. If you have any queries or feedback, feel free to comment down below with your Name and E-mail ID. Likewise, check out our iPhone Tips and Tricks, PC tips and tricks, and Android Tips and Tricks for more such tips and tricks. Thank You.