Waterproof smartphones are becoming the new norm of smartphone industries. Just like the screen nth and dual camera systems, more and more smartphones are now shipping with waterproof or splashproof technology. Realme is no different and they launched Realme 5 with a splashproof design which can change the market for budget smartphones. Today we have the new Realme 5i device which is essentially an upgraded version of Realme 5. And this time, it might come with a waterproof design as well. 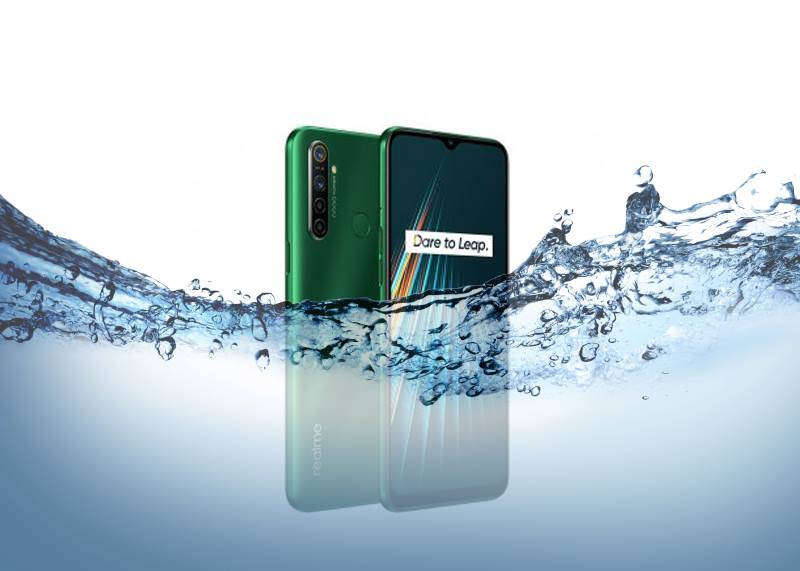 Is Realme 5i Waterproof device?

To make any smartphone waterproof, it must go through very complicated engineering and a couple of tests. After that, the smartphone can possess some sort of IP67 or IP68 waterproof ratings. This process is hard and costly, and that is why most companies do not provide waterproof features in their budget devices. However, Realme is ahead of its game and might give a splashproof or waterproof rating to its newly launched Realme 5i device.

We have checked with the official product listing of Realme 5i and found that it comes with a splashproof design. Which essentially means that the device can handle any accidental water splashes or juice spills. This is a piece of great news for Realme 5i customers. However, it’s not sure whether it is completely waterproof or not. So we will test that out further. 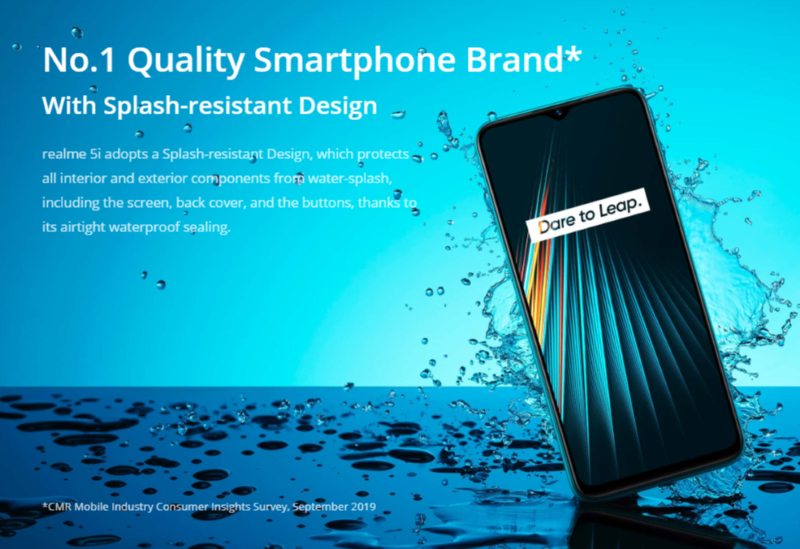 Realme 5i was launched on 7th January 2020. It an impressive smartphone and first of its kind to provide real splashproof design in the budget range. It holds a massive 6.52-inch touchscreen with a resolution of 720 by 1600 pixels. Realme comes with Color OS with the latest Android 9 out of the box. The device is powered by 1.8GHz octa-core Qualcomm Snapdragon 665 processor coupled with 4GB of RAM. Which makes it a powerful beast to handle day-to-day and heavy gaming tasks. Realme boosts an all-day 5000mAh battery which also supports reverse charging.

As far as cameras are concerned, Realme is housing triple camera setup at the back. With a primary camera of 12 MP f/1.8 aperture, a secondary 8 MP camera f/2.25 aperture and a third 2 MP camera and another fourth 2 Mp camera. For selfie enthusiasts, it has a wide-angle front camera with an 8 Mp f/2.0 sensor. For connectivity, Realme includes Wi-Fi 802.11 a/b/g/n/ac, GPS, Bluetooth v5.00, USB Type-C, FM radio, 3G, and 4G (with support for Band 40 used by some LTE networks in India) with active 4G on both SIM cards.

Realme 5i Waterproof and Dustproof Test

In our waterproof test, we will test the device for waterproofing measures. Since the device is already splashproof, it might withstand accidental water immersion as well. We will also conduct a Realme 5i dustproof test to find whether it holds good under sandy environments and dust storms.

After conducting the waterproof test, the device seems to operate normally. We dipped the device underwater for 30 seconds and it holds good. However, extending the time period to one or two minutes starts to give water damage and port damage to the device. When it comes to the dustproof tests, the device has no problems what so ever. Users can use this device easily in dusty environments without getting I/O ports damage.

After conducting the Realme 5i waterproof and dustproof test, we come to a conclusion that the device is splashproof and dustproof for sure. However, it is not completely waterproof. It can withstand any accidental water submersion for 30 seconds. But extended exposure to water can harm the device. This makes Realme 5i not suitable for underwater photography or videography. However, users can use this device for talking in rain or listening to music in rainy or stormy weather.