Recently, Xiaomi made the headlines with the recently launched Xiaomi Mi A3. The smartphone has the triple camera setup and also under-display fingerprint scanner for the price of a budget smartphone. However, the latest shakeup from the company is made in the smart TV department. We all know that Xiaomi, not only manufactures smartphones but also have a dedicated consumer electronics market as well. The Xiaomi Mi 4 Pro series of smart TVs will now be getting a firmware update of the latest Android 9 Pie which will be rolled out in September. The Mi 4 Pro series of smart TVs include the Mi TV 4 PRO, 4A PRO, 4C PRO, and 4X PRO. These smart TVs run on the Android 8.1 Oreo out of the box and will now receive the Android 9 Pie update.

Xiaomi is also very keen and interested in rolling out updates for its smart TV range as well and after delivering updates to older generation smart TVs now, the 4 Pro series will receive the Android 9 Pie update. Xiaomi has grabbed more percentage of the market share thanks to the aggressive pricing and feature-loaded smart TVs and the company wants to keep this pace up and running. The Android 9 Pie updates will roll out in batches starting in September 2019. 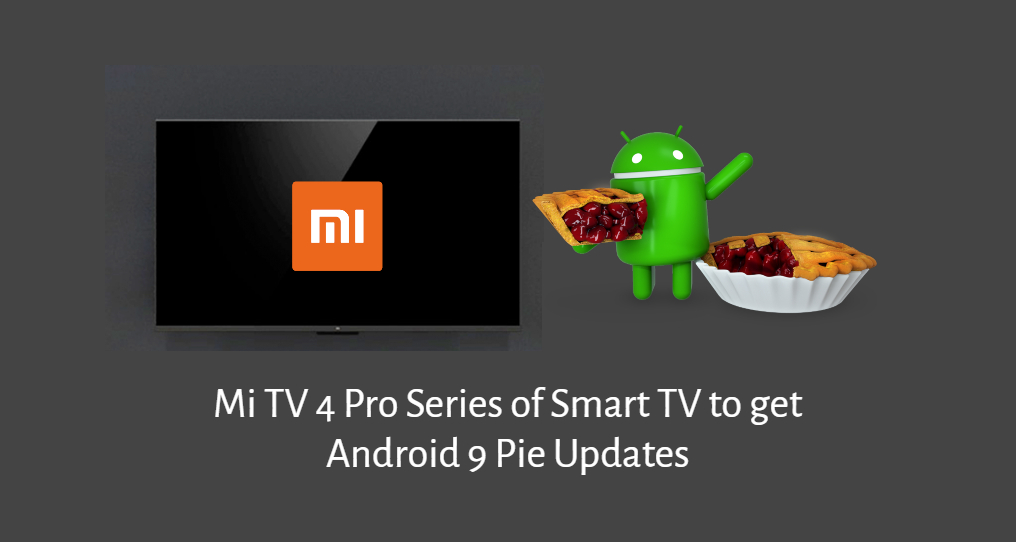 Xda developers have a telephonic chat with Xiaomi’s Product Manager, Sudeep Sahu, and he had this to say;

If [an Android TV update] is released in month X, we want to make sure, we work on it immediately, preempt, and try to get the certifications done well in advance.

In other words, we’re trying to set a standard – like we’ve done in terms of pricing, offerings and even bringing Android TV to even lower sizes and prices – to make sure the latest updates roll out to customers as soon as possible.

This is quite interesting as other smart TV brands are prepping up for the roll-out of Android Oreo for their range of smart TVs whereas, Xiaomi is all ready to push the Android 9 Pie. Also, note that the 32-inch variant i.e. Mi TV 4A PRO and the TV 4C PRO will be among the first in the 4 Pro series to receive the Android 9 Pie updates. Mr. Sudeep Sahu added that,

We want to lead the path and show [other brands] how Android TV updates [are done.]

Also during the telephonic chat with Xda developers, Sudeep said that, since none of the TV brands have attempted this migration to the Android Pie, it took some time for them to conceptualize the update for Xiaomi’s smart TVs. However, he also gave us information regarding the improvements done to the Patchwall 2.0. The team behind it is constantly working hard to improve user experience and improve the content discovery experience. But, the Patchwall 3.0 is not on the cards.

An interesting development in the world of smart TVs and surely other brands need to gear up and bring this kind of user experience to sustain in the market. Let us know in the comments, what’s your take on this?