In this tutorial, we will show you how to downgrade or rollback OnePlus 8/8Pro from Android 11 Beta to Android 10. After much waiting and a few unfortunate delays, Google finally announced the first beta build of the latest Android version. Although it has deviated slightly from its earlier designated timeline, yet it is finally here and a moment to rejoice. If you’re one of the Pixel owners, then you have the opportunity to install it right away. Likewise, Project Treble device owners could also get a taste of the same, via GSI images. Along the same line, many OEMs have come forward and joined this bandwagon.

In this regard, we saw Oppo giving out the news that the latest iteration of Android will be available to the Reno X2 series at the end of this month. Then Vivo also announced the Beta update for its iQOO 3 4G/5G variant devices. OnePlus also hit the news about the Android 11 updates for its latest flagships, i.e. OnePlus 8 and the Pro variant. It is quite commendable to see these OEMs being quick to welcome the Android 11 builds for their set of devices.

So if you have one of the devices from this Shenzhen OEM, and love to try out new and bleeding-edge features, then you might have flashed the beta build. But if you feel the beta build isn’t quite stable and couldn’t be used as your daily driver, then there is a handy way out. You could easily downgrade or rollback OnePlus 8 or 8 Pro from Android 11 Beta to stable Android 10. Detailed steps in this regard are hereby mentioned. Follow along. 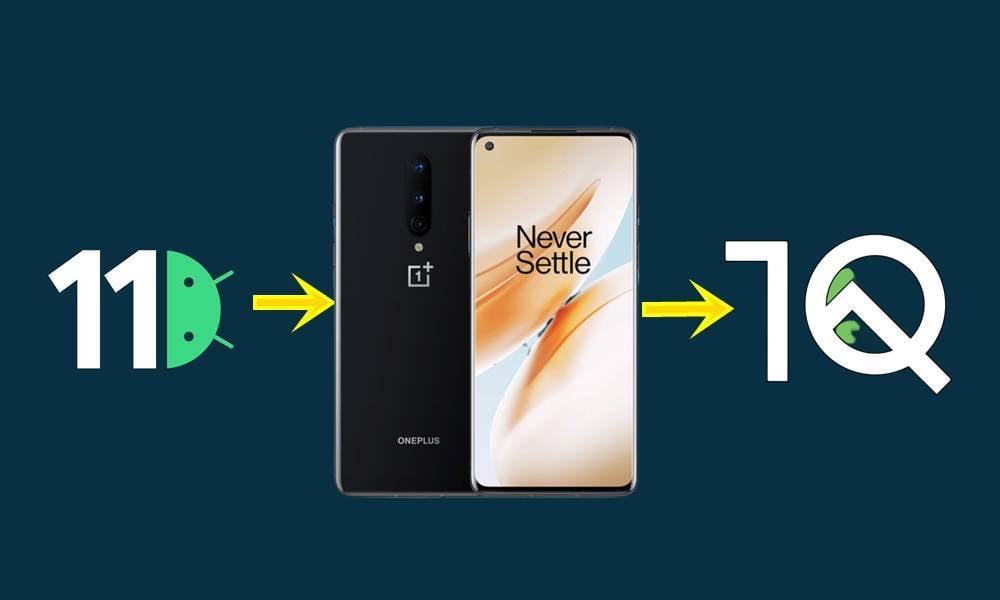 There’s no hiding the fact that Android 11 comes with quite a lot of commendable features. The list includes Separate Notification Channels, Bubble Conversations, Media toggles in Quick Settings. New Additions to Power Menu, New Features in Recent Menu, Location Permissions, and New Screenshots UI. Well, that is not it, there are a plethora of more such features lined up. You get a hold of them from our detailed Android 11 feature list.

However, the thing is these features are currently in the Beta build. And although they are somewhat stable than the Developer Preview, yet they shouldn’t be used as a daily driver. If you have a separate device in hand or you are a developer. then things stand different. But for the everyday users, we wouldn’t recommend trying it out as of now. Once the Android 11 comes out as a stable build, well there’s no stopping you then. Even when OnePlus announced the beta update for its latest set of devices, it mentioned a bunch of bugs and known issues, namely:

Although the bugs are slightly on the higher side but being a beta version, we aren’t quite surprised. Even then, if the tech geek inside you couldn’t help but flashed this build onto your OnePlus device, you might have noticed the stability issues and encountered these bugs as well. So, if you wish to get back to the normal ways, it is quite an easy process to do. Today, we will show you how to downgrade or rollback OnePlus 8 or 8 Pro from Android 11 Beta to Android 10. Let’s begin.

Before we list out the instructions for the downgrade, there are a few important points to keep in mind. To begin with, the process will wipe all the device data. hence it is recommended to take a backup beforehand. Also, make sure to keep your device sufficiently charged, so that it doesn’t turn off midway. Now download the Android 10 stable builds of your set of devices from the below links:

Now that you have downloaded the builds, here are the required instructions set to rollback or downgrade your OnePlus 8 or 8 Pro device from Android 11 to Android 10.

In this guide, we will be downgrading from the DP version (Developer Preview version) to the MP version (Stable official version).

So with this, we conclude the guide on how to rollback or downgrade your OnePlus 8 or 8 Pro device from Android 11 to Android 10. Since this a fresh install, your device would have been wiped as well. So you will be required to set up your devices from scratch. Also, the first boot after Android 10 installation might take some time, it is normal. On that note, if you have any queries regarding the instructions, let us know in the comments. Rounding off, here are some iPhone Tips and Tricks, PC tips and tricks, and Android Tips and Trick that you could check out as well.