Android 11 (aka Android R) is the 11th iteration of Android OS and the successor of the Android 10 Q, which was launched in September 2019. You will get more features and improvements in the upcoming Android R updates like battery sharing feature for wireless reverse charging, send images from notifications, mute camera app vibrations, Digital driver’s licenses, scoped storage, and more. So, if you’re interested in installing the latest Android 11 R GSI, check the full-depth guide below. 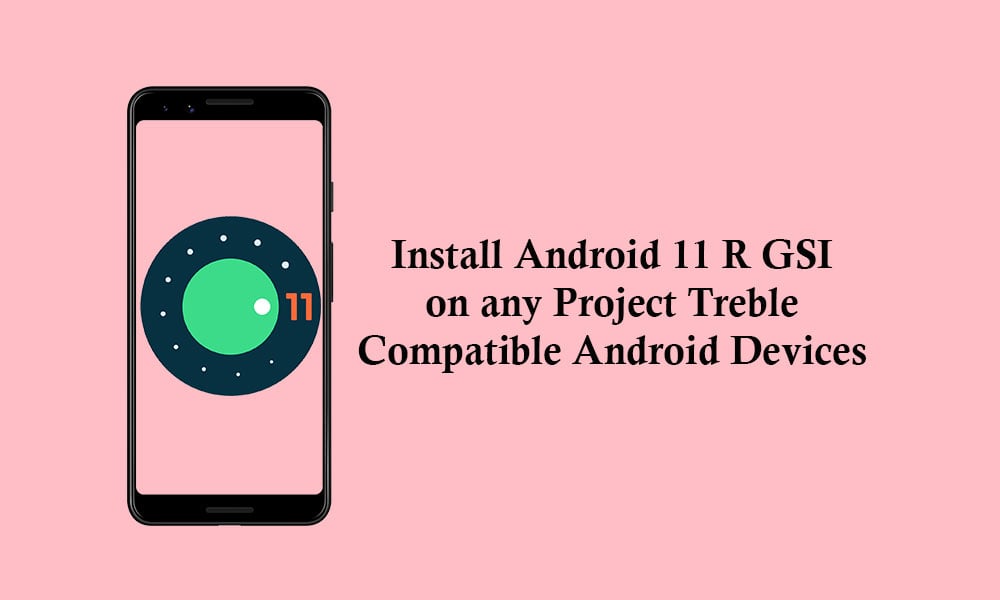 What is a GSI (Generic System Image)?

GSI or Generic System Image is a system image with adjusted configurations for Android devices that can be easily installed on a Project Treble compatible device. It’s considered a ‘Pure Android’ implementation with an unmodified AOSP (Android Open Source Project) code. If you don’t know, all the Android 8.0 Oreo or later versions running Android devices are Project Treble supported.

You can grab both the x86 and ARM64 CPU GSIs to flash on any Project Treble compatible Android handsets. Now, let’s take a look at the advantages of the GSI builds below.

Android 11 and its Features

Android 11 (Android R) is the most recent Android OS version released by Google, but currently, it’s in the early beta stage and will take a couple of months to arrive as the stable version. As we’ve mentioned above, it’s the 11th iteration of Android OS and brings so many features and other improvements you won’t find on Android 10. Meanwhile, the 2nd beta build has features stability to the system a lot.

Not only the 2nd beta build finalizes Android 11 SDK, but also NDK APIs, app-facing surfaces, platform behaviors, and restrictions on non-SDK interfaces. The developers can now update their apps for the Android 11 API level 30 without any issue. There are some of the changes made in the Android 11 beta that are mentioned below:

With Android 11, you will get some of the improved features or functions introduced in Android Q last year. As the Android 11 Public Beta is here, you will get a much-improved user experience than earlier. We’ve listed some of the highlighted, and useful features below that can be a game-changer for the majority of the Android users in the coming few months.

Which Phones Are Supported?

Except for the Google Pixel and Pixel XL (first-gen) devices, all the Pixel series smartphones support the Android 11 Beta. While the Project Treble supported, devices like Android 8.0 Oreo or later version running, non-Pixel Android devices are supported to run Android 11 GSI.

Once the stable version releases, more and more compatible Android device models will be included in the list. Now, if you don’t know whether your Android smartphone or tablet device is Project Treble compatible or not, you can follow the below links to get complete details and steps to check it.

An Easy Method To Check If Your Smartphone Supports Project Treble Check Android Phone’s Processor whether ARM, ARM64, or x86

We’re at GetDroidTips won’t be held liable for any kind of error that occurs on your device by following this guide or flashing any file. Proceed at your own risk.

After checking the Project Treble compatibility, make sure to follow all the download links and requirements properly. Now, let’s jump into the steps below.

We hope that you’ve found this guide pretty useful, and you’ve installed the Android R GSI on any of your Project Treble devices by following this guide successfully. If you’ve any queries, let us know in the comments below.