In this tutorial, we will show you how to unlock the bootloader on any Android device via the Fastboot method. While the concluding steps might be the same for all devices, the route taken to that step is slightly different. There might be a few extra requirements that your OEM might have added to this unlocking process. In that case, you will have to go through those prerequisites before you proceed ahead with the required steps. Here is everything you need to know in this regard.

Of all the major perks that the Android ecosystem boasts of, there isn’t a shadow of a doubt that its open-source nature stands right at the pinnacle. Opening the gates to a plentitude of customizations, users are generally spoilt for choices. For general users, a simple visit to the Play Store might suffice most of their needs. For example, they could install various custom launchers, themes, icon packs, wallpapers, and ringtones. Well, if that is not enough, they could even sideload their preferred apps onto their devices. But all these are just the tip of the iceberg.

The tech enthusiasts usually go a step further and unlock their device’s true potential. They could altogether install a new custom ROM which will be completely different from their device’s stock OS. Then there is the ability to replace the stock recovery with custom recovery like TWRP and install numerous mods, frameworks, ZIP, IMG files, and countless other tweaks. Well if you would take it a step further, you could even get administrative privileges and make modifications to the system partition just by rooting your device.

These are just some of the customization opportunities that we have mentioned here, there exist a plethora of more such tweaks. However, for each of the above modifications, there exists an important prerequisite that needs to be met. And that is your device should be having an unlocked bootloader. So if you are ready to try out these tweaks, then here are the required instructions on how to unlock the bootloader on any Android device via the fastboot method. Follow along. 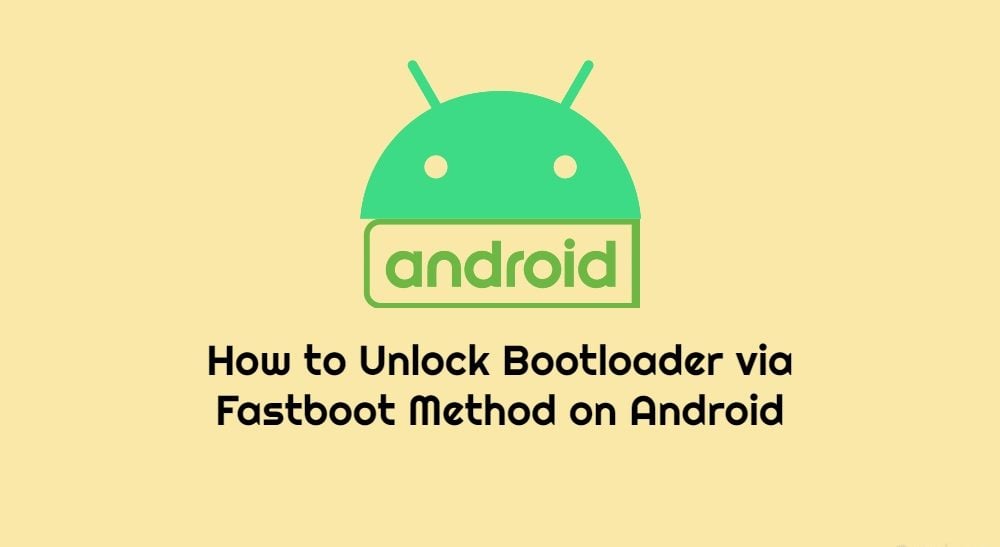 What is a Bootloader

The first question that might come to your mind is what exactly is a Bootloader on Android. According to Google, “A bootloader is a vendor-proprietary image responsible for bringing up the kernel on a device”. Well, this is too much to digest. In simpler terms, you might consider a bootloader to be a software program that determines what all programs your device needs to boot at the startup.

It also helps the device to boot into the bootloader mode. Similarly, every Android device comes with a few partitions, including boot, recovery, system, data, vendors, among others. The Bootloader is a safety mechanism for these partitions, making sure that the integrity of these partitions remains intact and there aren’t any modifications made to them.

The bootloader is a guardian to all the device partitions and hence will make sure that there aren’t any tweaks done to any of these partitions. It has to make sure that you are using the genuine software program shipped in by the device manufacturers. However, here is the thing. Not every user is a fan of this default OS. The reason for the same could be aplenty. For example, they might not like the UI, are against the notion of in-device ads, or the tons of incorporated bloatware apps might be bugging them.

The reasons could be aplenty, but thankfully the solution is only one- an unlocked bootloader on your Android device. As soon as you do so, the system would no longer place any restriction on the depth of customizations that you could achieve. Just at the boot time, you might get a bootloader unlocking warning message, but that is it. There would be no limitation in enjoying the benefits that an unlocked bootloader brings with itself. But what are these benefits in the first place? Let’s check it out.

Advantages of an Unlocked Bootloader

Once the bootloader on your Android device is unlocked, you could install a custom recovery like TWRP. This in turn will give you the option to install mods, wipe various device partitions, take a Nandroid backup, install files via ADB, and plenty more. Furthermore, if the device bootloader is unlocked, you could install many popular custom ROMs including LineageOS, HavocOS, Pixel Experience. Not only does this give your device a fresh new outlook, but it could also upgrade the device’s Android version, even if officially it is no longer slated for the upgrade.

Likewise, with the help of Magisk, you could get easy access to the system-level files and tweak it as per the need. In simpler terms, this is known as rooting the device. We could go on and on listing out the benefits, but the thing is there is another side attached to it. There are quite a few risks associated with this the unlocking of the bootloader on Android. So before you proceed ahead with the steps, make sure to check out the risk factor as well, mentioned below.

There are quite a few risks associated with an unlocked bootloader. To begin with, your device is now more prone to attacks. Furthermore, your OEM might even make the device’s warranty void and null. Likewise, some banking apps like Google Pay and games like Pokemon GO might not function correctly. Similarly, you will be degrading the Widevine Certification from L1 to L3, this will lead to you not being able to view Netflix contents in HD. The process in itself is pretty dangerous and might brick your device or send it to bootloop if not done correctly.

So by now, you are aware of all the perks and caveats. If you are ready to proceed then follow the below steps to unlock the bootloader on any Android device via the fastboot method.

How to Unlock Bootloader via Fastboot Method on Android

Before we begin the unlocking of the bootloader, let us take a deep look at what is a bootloader and what advantages or disadvantages you get, once you unlock it;

Before we begin with the unlocking of the bootloader, I would strongly recommend you to create a backup of your device storage and all your files stored on your device. Unlocking of bootloader will wipe off the entire data on your device. Moreover, it is advised to follow the steps mentioned in this post very carefully to avoid permanent damage or bricking of your device. If anything goes wrong the author or GetDroidTips are not responsible for it.

To make the entire unlocking process easier to understand, we have broken it down into simpler steps. Follow along.

First off create a backup of your entire Android device. This is because the process will erase all the data from your device. You could refer to our detailed guide on the said topic.

What is OEM Unlocking? How to Enable it on an Android devices?

While Pixel Nexus and Android One devices make it pretty easy when it comes to the unlocking process, some OEMs like HTC, Nokia, Motorola, HTC among others require a unlock token, specific codes, or even a specific file. You will have to complete these requirements before beginning the unlocking process via the fastboot method. You could take the help of the below links, follow their instructions, and proceed with the next step afterward.

Do keep in mind that the first boot will take some time, this is completely normal. Another thing worth mentioning is the fact that even if your device was launched after 2015, it might still follow the earlier fastboot oem unlock command. So if the fastboot flashing unlock command throws up an error in your case, you should try out the former one.

Furthermore, you will also see the Unlocked Bootloader warning message after every boot, again nothing to worry about. When your device boots, you will have to sign in with your Google account as the device has been wiped. On that note, if you have any queries do let us know in the comments below. Rounding off, here are some iPhone Tips and Tricks, PC tips and tricks, and Android Tips and Trick that you should check out as well.