In this guide, we will show you the steps to optimize Nvidia Control Panel for gaming and performance. This utility tool provides the user with a platform to tweak the graphics properties as per the requirement. There are quite a few functionalities that might come in handy in improving the game’s resolution, speed, and frames per second. Along the same lines, with the help of Ambient Occlusion, Anti-aliasing, Vertical Sync, and Texture Filtering, you could further improvise on the visual effects.

All these features coupled with display management, application, and gaming-specific features prove to the icing on the cake for the gamers. However, with such a plethora of feature sets and terms like Multi-Frame Sampled AA and CUDA GPUs, some users aren’t sure which settings need to be configured and how. Well, if you also echo these thoughts, then this guide is here to help you out. In this guide, we will show you how to optimize Nvidia Control Panel for gaming and performance. Follow along for the detailed instructions. 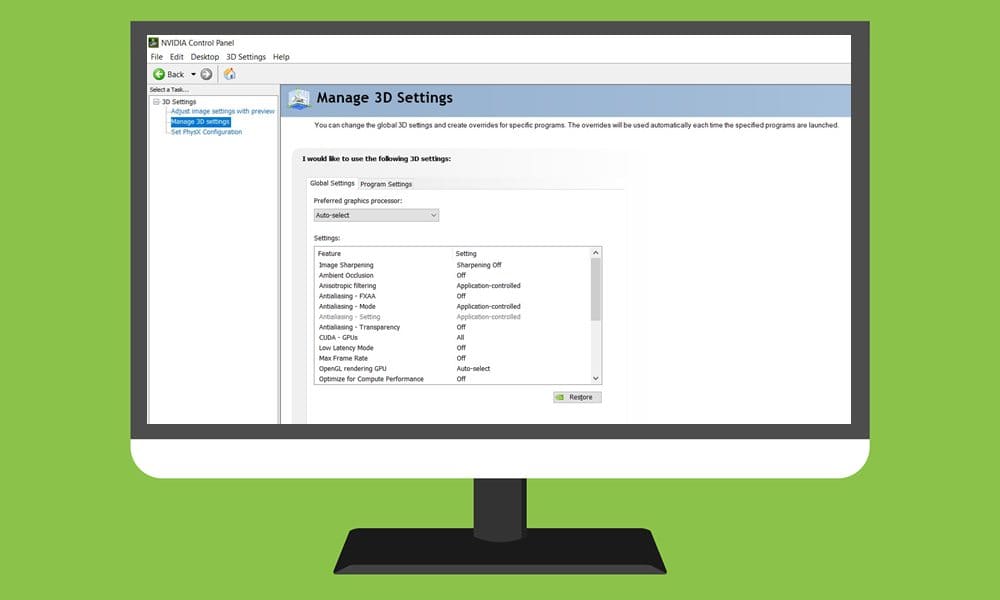 How to Optimize Nvidia Control Panel For Gaming and Performance

First and foremost, head over to the Start menu and search for Nvidia Control Panel. If you don’t have it yet, then download and install it from the Microsoft website. Once it launches, click on the Manage 3D Settings under the 3D Settings section. You will now be able to get a hold of all the settings that we are about to tweak. Furthermore, the Prefered graphics processor is set to Auto Select. You may change it to your Nvidia Processor. 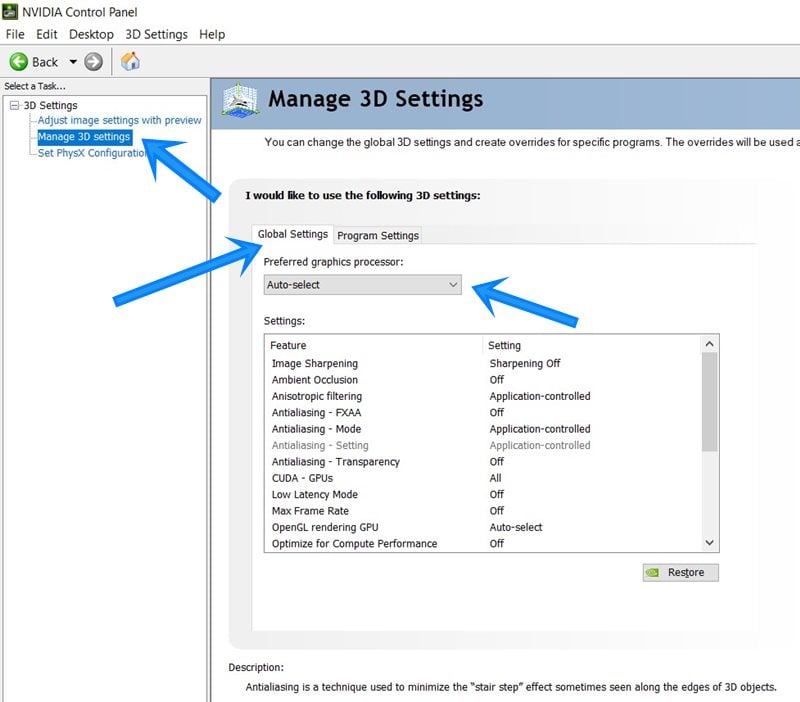 Likewise, on the top, you would notice two tabs- Global Settings and Program Settings. As far as this guide goes, it focuses on the former. However, if you wish to tweak any settings just for an individual app/game, then you may do so by adding your preferred game under the Program Settings. With that said, let’s now turn our attention to optimize Nvidia Control Panel for gaming and performance.

In simpler terms, Antialiasing smoothens up the lines that appear as jagged. Furthermore, you could set the Antialiasing Mode to Application-controlled, so that it fine-tunes with respect to each app’s requirement. As far as the Antialiasing Setting is concerned, there aren’t many games that may be able to use the Coverage Sampling Antialiasing (CSAA) or Multi-Frame Sampled Antialiasing (MFAA) features. Then there is also an Antialiasing Transparency feature. However, it is advised not to turn it on as it usually results in performance issues.

Features such as PhysX physics simulations or AI processing could be accelerated using the CUDA GPUs. This would then result in a much-improved performance overall.

DSR or Dynamic Super Resolution is another useful feature when it comes to optimizing Nvidia Control Panel. Through it, you could render a game at a higher resolution than your monitor’s max supported resolution. The rescaling is done on its own, so you don’t have to look much into that aspect. And since you have enabled this option, don’t forget to checkout the Generic DownSampling Tool as well.

As is evident from its name, it controls the maximum number of frames that your CPU can handle. Also known as Maximum Pre-Rendered Frames, sometimes this feature can also result in input lags, so use it carefully.

if you aren’t ready to sacrifice on the performance front, and still wishes for the MSAA-like Antialiasing quality, then the Multi-Frame Sampled AA should be your go-to choice.

It consists of three options: Optimal Power, Adaptive and Prefer Maximum Performance. Furthermore, it depends on the user whether they want a balanced performance and battery experience or is ready to incline towards either of the two features. Optimal Power will result in a reduced performance whereas Maximum Perofmrce would give you a better experience at the cost of the battery. So decide accordingly.

Shader Cache is used to customize the visual effects on the go. These are compiled and executed right at the run time. For example, if you move from one region to region, then the Shader Cache will quickly implement the surrounding and surface areas. Since it is a cache, it gets stored on your PC.

Many users prefer to delete these temporary data. However, doing so will result in the game setting up the environment from scratch and this might take some time. This is because rather than using the precompiled stored shaders, it will have to create them all over again. As a result, many users prefer to keep this setting to ‘On’.

There are quite a few options in this domain to optimize Nvidia Control Panel. For example, keeping the Anisotropic Sample Optimization feature disabled will result in getting the highest image quality. Likewise, you should also consider setting the Texture filtering Negative LOD bias to Not Allowed. Then there are four different Texture filtering Quality that you could select from. These include High Performance, Performance, Quality, and High Quality. Well, all these are self-explanatory in themselves.

Using this feature, you could lock the GPU to the display’s refresh rate. As a result, you could easily remove the FPS limit thereby giving you increased performance. However, you might have to go through ‘tearing’ and occasional ups and downs in FPS. So if you are having a Gsync monitor, then it’s best to skip this feature.

So this was all from this guide on the steps to optimize Nvidia Control Panel for gaming and performance. Do keep in mind that there isn’t any universal value or setting that is going to work out. You might have to tweak it depending on your CPU and GPU powers. With that said, if you have any queries, do let us know in the comments section below. Rounding off, here are some iPhone Tips and Tricks, PC tips and tricks, and Android Tips and Tricks that deserve your attention as well.