Realme runs on Oppo’s ColorOS and currently has ColorOS 6 based on Android Pie 9.0 across a majority of its devices. Google announced Android 10 a few months ago with beta updates coming through and finally, officiated a release on September 3rd and pushed the update across Google Pixel devices and Essential PH devices. A few days later, Redmi K20 Pro and OnePlus 7/7 Pro started receiving the update too.

Realme has rolled out Android 10-based ColorOS 7 for Realme 3 Pro and has posted a roadmap for other Realme devices as well. Realme is also rolling out its RealmeOS that might be official by the end of this year, although there is no confirmation on the same. Once it is released, it will be based on Android 10 as well. 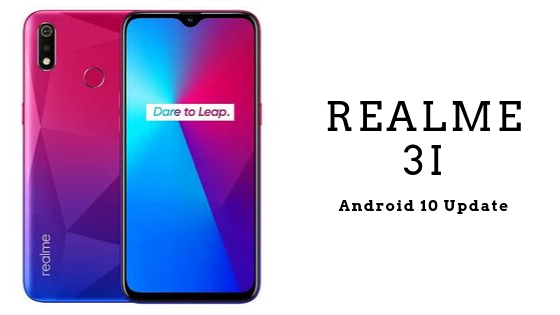 Google introduced Android 10 that was formerly known as Android Q, with a tonne of features and whatnot. It can transcribe videos to suggest replies and more. It has a long list of features that we have discussed in a previous blog that you can read here.

According to the timeline that Realme posted a few weeks ago, Realme 3i is slated to get its Android 10-based ColorOS 7 sometime in Q2 2020 which is basically between April to June of this year.

Apart from Realme 3i, other devices that will be getting bumped to Android 10 are Realme 3 and Realme 5 in the same period while the Realme 2 Pro will get its update in Q3 2020 around the same time when Google will launch its Android 11 later next year.

The Realme 3 sports a 6.2-inch IPS LCD with a resolution of 720×1520 pixels. The device runs on MediaTek Helio P60 SoC paired along with Mali-G72 MP3 GPU. With Dual SIM support, the device supports 4G along with Wi-Fi 802.11 b/g/n and Bluetooth 4.2 with A-GPS, GLONASS among other services.

It has a dual 13+2MP rear camera setup along with a single 13MP shooter placed right in a teardrop-shaped notch and has a rear-mounted fingerprint scanner. It is a budget smartphone and was launched with Android 9.0 Pie-based ColorOS 6 out-of-the-box and will get an upgrade to Android 10 in a few months.>