Realme unveiled its Realme 5 skipping the ‘4’ series since it is considered as an omen in China. Realme 5 series was expected to get a 64MP sensor after reports started pushing in it which didn’t materialize since the non-Pro Realme 5 has a 12MP primary sensor which means the 64MP sensor is out of the question for sure. Google released its tenth-generation OS aka Android 10 on September 3rd after weeks of rigorous testing via several beta updates.

On September 3, Google released a stable update to all Pixel and Essential PH devices. Furthermore, Xiaomi Redmi K20 Pro got the update followed by both OnePlus 7 and 7 Pro. Realme 3 Pro is also one of the few devices to be a part of Google’s Project Treble which means Android 10 beta is already available for it. Realme 5 is a budget phone and it is eligible for Android 10 as well so read along to know more about it. 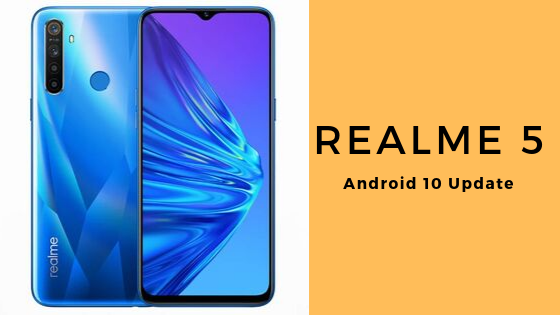 Google announced the Android 10, the tenth iteration to Android OSes which brings a lot to the table in terms of features. It has a variety of features especially attuned to achieve the top-notch security and privacy of the users as well as tonnes of features that ease navigation using gestures, Smart Replies and Live Captions among other features. You can read more about the Android 10 features here!

Released alongside Realme 5 Pro, the Realme 5 brings a 6.5-inch IPS LCD with a resolution of 720×1600 pixels. With Android 9.0-based ColorOS 6 onboard, the device is upgradable to Android 10 which is expected soon. The Realme 5 runs on a Snapdragon 665 octa-core processor coupled with Adreno 610 GPU along with 32+3GB, 64+4GB, and 128+4GB of RAM options available with it.

The device features a quad-camera setup too although with a dialed-down primary sensor of 12MP paired with 8MP ultrawide, 2MP macro, and 2MP depth sensor with a 13MP front selfie camera placed right within a teardrop-shaped notch.