Realme 6i smartphone was launched in March 2020 with Android 10 out of the box. The device sports a 6.50-inch touchscreen display with MediaTek Helio G80 Chipset.

In this guide, we will show you the real image of the ISP pinout and test point for the Realme 6i RMX2040 / RMX2002. By using the ISP PinOUT, you can easily restore the stock ROM, bypass FRP lock, or reset user data on your device via UFi Box. 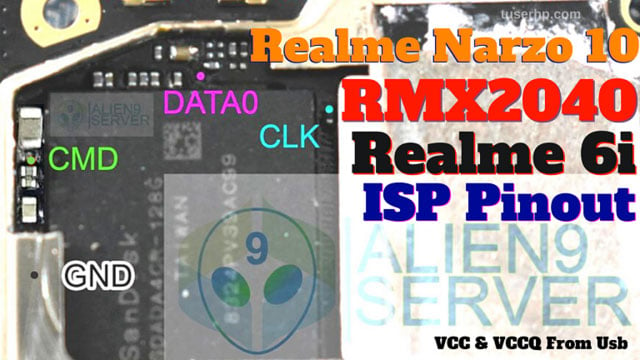 The phone is built on a plastic frame and has a plastic body. At the front, Realme 6i has a 6.5 inches IPS LCD display with a 720p resolution having a pixel density of around 270 pixels per inch (PPI). The screen-to-body ratio is around 82%, with an aspect ratio of 20:9. This screen is protected by Corning Gorilla Glass 3.

For connectivity, it has WIFI 802.11 b/g/n, Bluetooth 5.0, USB OTG, and GPS for navigation. The phone features almost all the basic sensors required like an accelerometer, gyro, proximity, and compass. The phone comes in Cream white and Green Tea color.