Turns out overheating issue on Realme Narzo 30, 30 Pro, 30A is perhaps real as the phone does gets heated up during operations be it hardcore gaming or watching videos for a quite long time. However, there can be other factors involved such as exposure to high temperature or heat or it could be because of outdated software and so on. Here’s a troubleshooting guide on what is an overheating issue on Realme Narzo 30, 30 Pro, or 30A and how to fix it using various methods that would help you avert the issue for long. 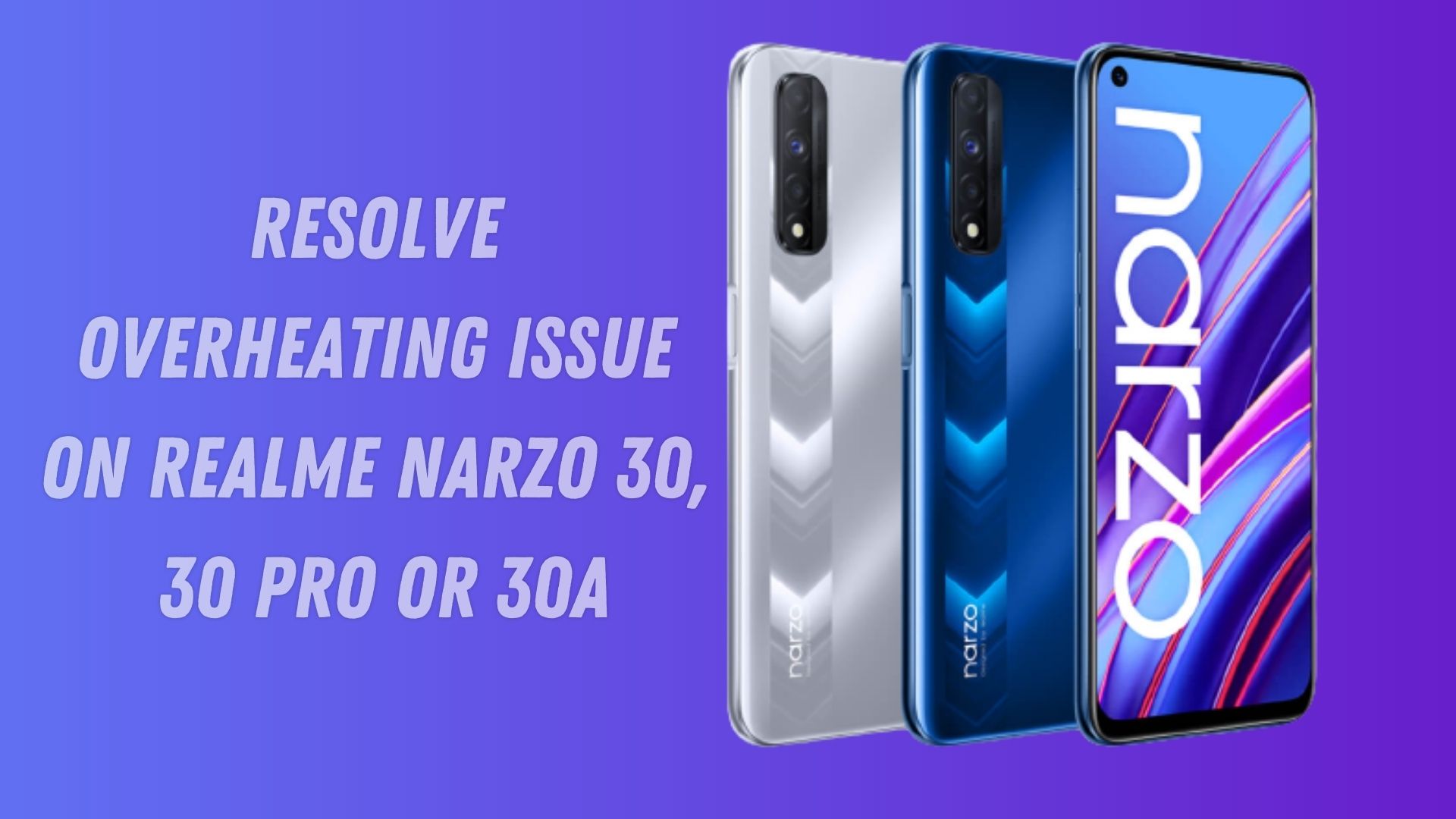 This is a generalized statement as the same can be applied to any other smartphone as well so read along.

Generally, a chipset along with other components works out to get things done be it calling or texting and so on. Sometimes due to a buggy app or higher core or external temperature can produce a lot of heat and since most Android smartphones don’t have an active or passive heat-dissipating system, it results in turning up the temperature. It is common for phones to get warmer to the touch with usage over time.

However, when the phone is subjected to heavy usage or if it is being used in direct sunlight or a hot environment, the internal temperature tends to shoot up as well. This is what causes the phone to overheat and can damage the internal systems as well as blast off in rare cases. I haven’t heard of any complaints about Realme Narzo 30, 30 Pro, or 30A going off due to overheating as of now but the probability shoots up as the temperature shoots up. Here’s how you can resolve overheating issues on Realme Narzo 30 series smartphones.

Resolve Overheating Issue on Realme Narzo 30, 30 Pro or 30A

You can use your phone anywhere at any time and it isn’t a problem unless you are using it at a set temperature. When you are using your phone in direct sunlight, the display can escalate heat retention thus increasing the internal temperature. This is one of the reasons why you would end up with an overheated phone. To resolve it, simply avoid using the phone in direct sunlight or take cover in case you can’t resist but use the phone outside such as on a beach.

Narzo 30, 30 Pro, or 30A doesn’t have an active or passive heat dissipation system and thus, you need to keep it cool. One way to do it is to take off the case or phone cover. This will aerate the phone and allow the air around the phone to cool it off in some time. Also, certain phone cases/covers tend to block heat from venting off the phone which causes more strain on the internal component due to high temperature.

Use the Airplane Mode

Airplane mode or flight mode is a feature that disconnects you from all cellular and radio-based transmissions be it Bluetooth or Wi-Fi or GPS. Doing so will cause the phone to take a breath of relief and that is what you want to resolve the overheating issue. You can combine this method with a few others for better results.

You have an Android smartphone (Narzo 30, 30 Pro, 30A, in this case) which means you can open several apps at once and use them by toggling between them. Apparently, the more apps you have run either in the foreground or the background, the more work is required to keep it running.

Apps running in the background may not consume many resources but when you have several apps running at once, it can add up. It is a simple swipe-up to toss to get rid of background apps since you can open them anytime you want without a glitch.

That’s the best thing you can do if you are facing overheating issues on Realme Narzo 30, 30 Pro, or 30A unless you have some unsaved work that needs saving before you do it. Turning off the phone will give it enough time to dissipate heat and cool it off. Even if there’s a software bug or issue, rebooting the phone will fix the issue in most cases.

Use the phone in bursts

Your Realme Narzo 30 series smartphone is immensely capable of carrying out a tonne of tasks with ease. It can let you stream a movie or two, call or text someone, scroll through Instagram and other social networking sites endlessly, and wander on the internet without any hitch. However, using the phone for a longer duration at once will put a lot of stress on the SoC and other components involved.

It is simple that if you keep an app open, the chipset will have to allocate resources to keep it running and whatnot. Combine the required and allocated resources to times of apps open in the fore and background and you are talking about a lot of resources. Your phone can handle a lot but constantly using the phone puts a strain and thus, generates heat as a byproduct. If you don’t keep the phone cool during heavy usage such as streaming HD+ movies on Wi-Fi, the phone will heat up surely.

The simple fix is to use the phone in bursts. I am not stopping you from using tens of apps at once but instead of endlessly using the phone for hours, give it a few minutes of rest now and then. This will allow the chipset to take relief and aerate the phone dissipating the heat generated and so on. This is usually one of the best ways you can resolve an overheating issue on Realme Narzo 30 series smartphones.

Gaming for longer period is a complete NO

Who doesn’t love gaming? Your Narzo 30 series phone is capable of running anything from 2D games to 3D high-octane games like PUBG and yet, you would need to take care of your playing habits. Turns out gaming for a longer period hurts the CPU and GPU among other components working together with it and that’s the reason why you would end up with a phone that is warm to touch just a few minutes after you start playing games.

No doubt playing for a longer period is not recommended. It is advisable to use the phone for gaming in bursts rather than all at once. Overheating issues during games will hamper the system’s performance as well so you will see frame drops, lagging, and the phone might even hang needing a soft reset instead.

Check for the settings

You need to keep all the apps installed on your device updated. This ensures they are up to the standards with the latest security and features from the developer. However, an outdated app may introduce bugs and viruses and thus, it is recommended to update all the apps at once. You can go to the Play Store and set the downloads as “automatic” so you don’t have to worry about manually updating the apps.

Just like how an outdated app can cause problems, outdated Android firmware can also present a few problems. You will have to keep the Realme UI (Android OS) on your Narzo 30 series smartphone updated to steer away from any incoming problems. However, if your phone is out of software update period, you may get some issues sometime down the line. You can install a custom ROM to get frequent updates though.

If your phone is out of software update period, you will not receive any new OS upgrades which make your phone vulnerable to different types of viruses. This is where a good-quality antivirus can help subside such issues by scanning them thoroughly and quarantining any malware or viruses if found.

If you can’t seem to find what’s wrong with the phone, it could be a hardware-borne issue that would need professional assistance to fix. You can either walk into a third-party or local service center (which is cheaper but voids warranty, if any) or you can opt for an authorized service center (which could be expensive but retains warranty and the repair expenses might be covered as well).

My best advice will be to report the problem to both the outlets and check which provides a better solution at the best price and decide thereafter.

This was an extensive guide on how to resolve overheating issues on Realme Narzo 30, 30 Pro, or 30A that you can use with any Realme or Android smartphone for that matter. Check out GetDroidTips for more such great content.