If you have been on the lookout for a way to unlock bootloader on Realme X, then you are absolutely in the right place! Read on to learn about the procedure, necessary downloads and all the prerequisite knowledge involved with the process.

The Realme X is the latest flagship offering from the company and it has just been announced recently. The company has already announced and released their past flagship devices that dominated the Indian market. These were the Realme 3 and the Realme 3 Pro. Both of these devices were budget-oriented and served really well for the time being. However the company soon realized its worth and decided to go completely flagship with the release of the Realme X. With over 2 weeks worth of teasing on social media and advertising, we finally have the new phone.

We will be talking more about the Realme X a little later in the article. Let’s first get the part of unlocking the bootloader out of the way. Doing so unlocks a world full of possibilities and gives the end user a lot more of customization and cool tweaks to play with. Since the Realme X is still relatively very new, the official forums don’t have a confined guide on how to exactly unlock its bootloader, however the procedure is the same that was being followed with the Realme 3 and 3 Pro. Since we have already covered that article in the past, the following method to unlock bootloader on Realme X will work just flawlessly too. 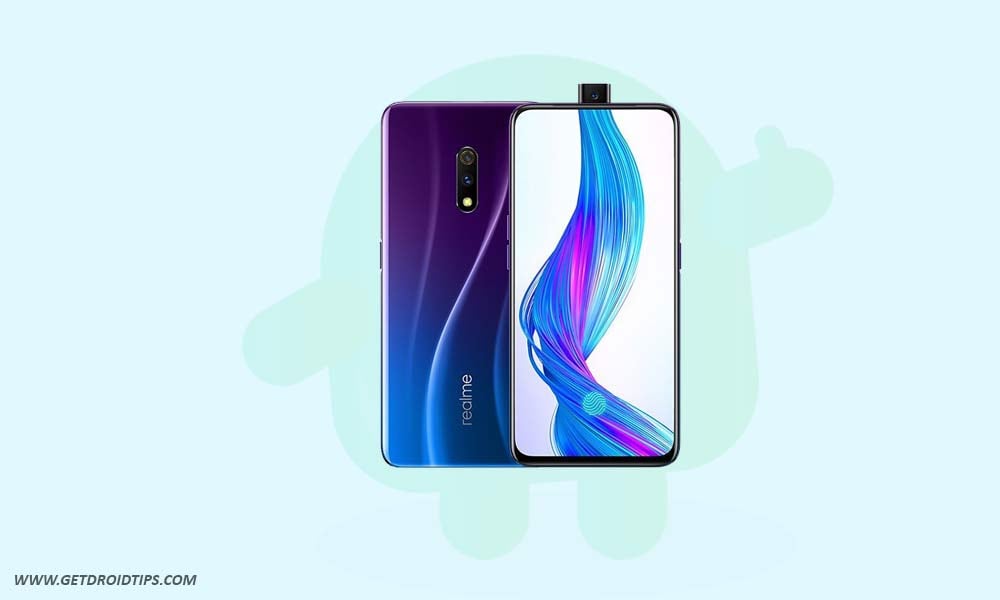 The Realme X is a flagship device offering from the company and it blows other phones in the same price tag out of the water. The Realme X is powered by the new Qualcomm Snapdragon 710 which despite not being of a flagship series is still a very powerful and efficient processor and comes toe to toe with the Snapdragon 845 and 855. With this processor in hand, you can expect zero frame drops in graphic intensive games like PUBG, even on the highest of the settings available. The phone also comes with 8 Gigabytes of RAM as the standard and we feel this is a sweet spot, both for future proofing as well as continued usage in today’s era.

Easily the best aspect and the attention grabber of the Realme X is the big and vibrant 6.53 inch 1080×2340 display. Not only is the display AMOLED but it is also fully notch-less, and instead puts the front facing camera in a motorized popup style just like the Redmi K20 Pro and the OnePlus 7 Pro. Other specifications include a base storage variant of 128 Gigabytes and all with a pretty decently sized battery holding a capacity of 3765 mAh. The camera unit is also really impressive with this smartphone. It sports a dual lens arrangement in the rear including a 48 Megapixel primary shooter and a secondary 5 MP lens used for additional depth sensing. The front camera that comes included in the motorized popup is a 16 Megapixel one which is great for people who rely largely on social media apps that use the front facing camera.

What does Unlocking your Bootloader mean?

Before we proceed to unlocking your device’s bootloader, let’s take a quick second to hover over what unlocking a bootloader really means. When your device comes from the OEM, it is deprived of any console control by the user. This means you cannot tamper with the software and the things inside the UI on your own just yet. However, by unlocking the device’s bootloader, you are granting yourself access to parts of your phone that were otherwise impossible to get to previously. This process requires a Windows computer with an ADB interface that can talk to your device in the fastboot mode. The most common ways of unlocking a bootloader include using a tool, or using fastboot commands directly to ingest the codes inside of your phone.

Why should you Unlock your Bootloader?

There are a plethora of reasons as to why you might want to unlock your device’s bootloader. For instance, you can install custom recoveries like TWRP or CWM on your phone’s recovery partition which grants access to a lot more things furthermore. You can easily root an Android device with an unlocked bootloader, and as we know, a rooted device has many cool features you can play around with. Lastly, you will need a fully unlocked bootloader to flash any custom ROMs or zips on your device. Basically, you are granting yourself system rights by tampering with the state of your device’s bootloader – in a good way.

Unlocking your bootloader also means you can troubleshoot a lot more issues than ever before. For example, if your device goes into a bootloop, or a soft brick, then the first step to revive it requires you to unlock its bootloader. Moreover, you can use powerful root applications like Magisk and Xposed Framework to sideload some really amazing third party extensions that will boost your device’s capabilities.

Unlocking your device’s bootloader will void your warranty. The process also will wipe away all of your data, which includes photos, videos, apps and your calls. We, at GetDroidTips are not responsible for any unforeseen bootloops or crashes that may occur on your devices. All of our guides are thoroughly researched and provide only the correct means to follow the procedure. Proceed with caution and follow each step very carefully

With everything out of the way, let’s begin with our guide. You will be needing a few prerequisites in order to unlock your phone’s bootloader first. Make sure you have everything that you need up and running. Without any further delay, let’s have a look at how you can unlock the bootloader on your device.

How to Unlock Bootloader on Realme X

Voila! You’ve successfully unlocked the bootloader on your Realme X! Now you can enjoy all the features like being able to install custom ROMs, root your device, play around with various mods and so much more! If you have any queries regarding the article, then do let us know down below, we’d be happy to assist you through your procedure.