After months of beta updates, Google finally launched its Android 10 (formerly known as Android Q) on September 3 as the successor to last year’s Android Pie 9.0. As per the schedule, Google released the update to all Google Pixel devices right from first-gen to third-gen devices along with Essential PH. Xiaomi Redmi K20 Pro became the first device to be upgraded to Android 10 followed by OnePlus 7 and OnePlus 7 Pro that is now upgradable to Android 10 based OxygenOS 10. In this extract, we are discussing a crucial query/question that users are asking i.e. When will Realme 5 Pro Android 10 Update rollout?

Realme 5 Pro was launched in the first week of September 2019 as company’s first-ever quad-camera smartphone in a budget range with Android 9.0 based ColorOS 6 onboard. It is upgradable to Android 10 based ColorOS. 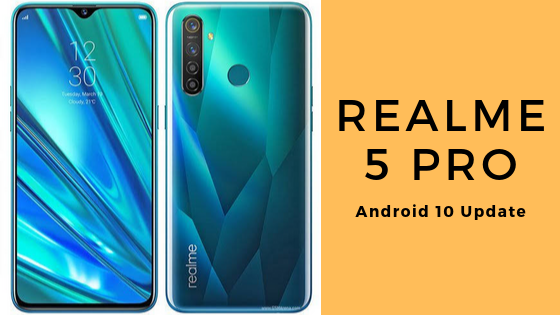 Android 10 brings a plethora of features onboard ranging from gesture-based navigation to location & privacy controls and more. It has upgraded the UI along with support to foldable & 5G networks as well. You can read more about it here.

As per the roadmap that Realme released a few weeks ago, it will be rolling out Android 10 update to its Realme 5 Pro in Q1 of 2020 which is basically between January to March. Although the exact date isn’t available yet, I highly believe that it will be among the first devices to get Android 10 early next year followed by Realme X (Q1 2020) and Realme XT (Q1 2020) since Realme 3 Pro has already received its Android 10 upgrade recently.

Realme 5 Pro is the latest edition and brings a 6.3-inch IPS LCD display with 1080×2340 pixels resolution with Corning Gorilla Glass 3+ onboard. Launched in early September with Android 9.0 Pie-based ColorOS 6, Realme 5 Pro will soon get Android 10 update as well. It sports a Snapdragon 712 10nm octa-core processor backed with Adreno 616 GPU along with 4+64GB, 6+64GB, and 8+128GB storage solutions. The device marks on the onset of the first-ever quad-camera system on Realme devices with a triple 48+8+2+2MP sensors bundled with a 16MP selfie shooter.

The device has a rear-mounted fingerprint scanner and it is powered by 4,035 mAh Li-Po battery with VOOC 3.0 fast charging at 20W which is capable of charging the battery to 50% of its capacity in 30 minutes. The device is available in Crystal Blue and Crystal Green color variants and brings onboard some of the premium specifications tied with a budget price tag.