With characters like Kratos and Atreus, nothing seems impossible no matter how tough the odds are. However, God of War Ragnarok brings some impeccable odds that even the characters feel trouble dealing with. But that’s no excuse for these God-level characters as they can get past anything with the help of a few magical accessories and armor. Fortunately, God of War Ragnarok features some amazing suits and best armor set that will boost up your power and resistance as you go head-to-head against any difficulty.

But again, almost all the armor featured in the game comes with remarkable stats and resistance. This makes it tough for the player to choose the best one for them. And if that’s where you have been stuck until now, then it is time to know your armors better. The best armor in God of Ragnarok isn’t one that provides you ultimate protection. In fact, there are some that further amplify Kratos’s powers to unleash himself to his best version. In this article, we will be looking at some of the best armor sets that you could go for without any second thoughts. 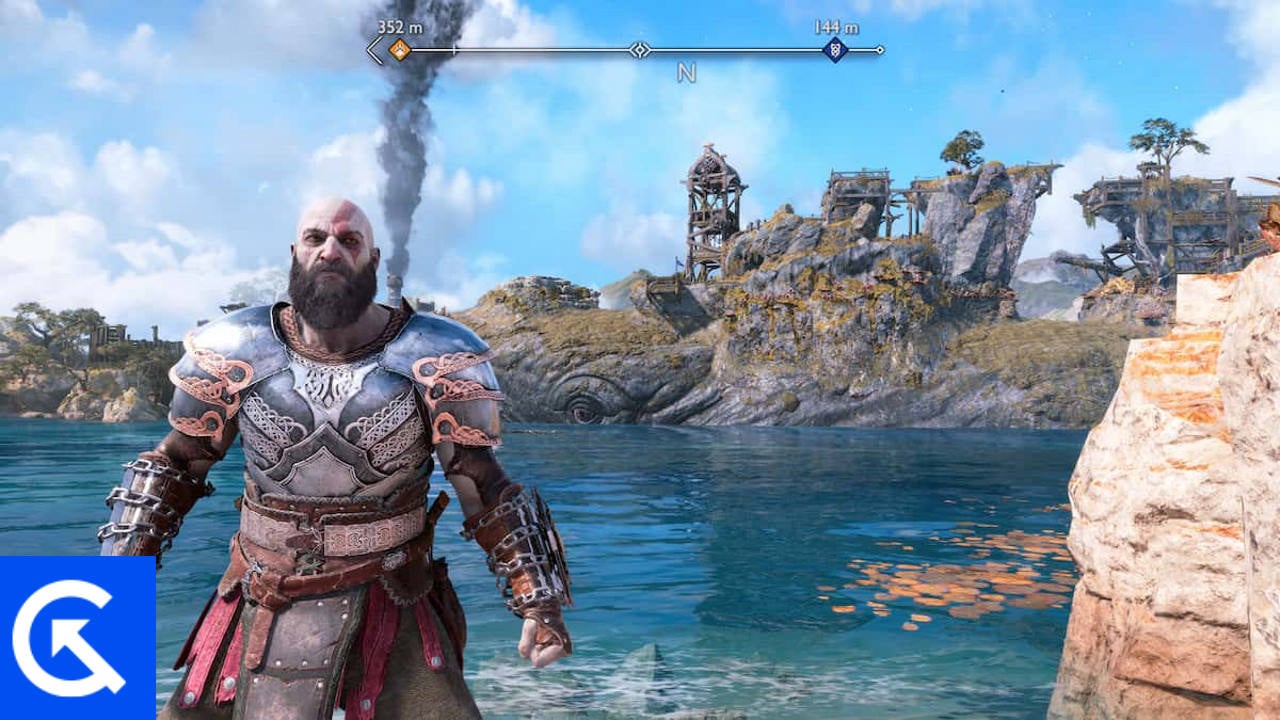 The best armor sets in God of Ragnarok offer powerful buffs that help increase Kratos’s powers. With the right armor on his body, you will see enhanced combat styles and power. The character simply gets better at everything he does and makes things look easier. So, here are the best armor sets in God of War Ragnarok that will give you the best possible outcome throughout your gameplay.

Speaking of the best armor in God of War Ragnarok, Surtr’s Scorched is arguably the best one you could think of. With that said, you can expect great difficulties to go through to finally get your hands on this antique piece. However, all your effort and time are going to pay off. And as the toughest armor set, it comes with astounding stats both in terms of offense and defense. But considering its overall stats, it provides better stability especially if you are into the offensive side.

Apart from that, Surtr’s Scorched set also possesses some great skills that will in turn help you in difficult situations. The two skills, Preemptive Strike and aggressor’s Resolve provide the perfect balance to make up for any kind of situation. While the preemptive strike offers bonus damage every time you interrupt your opponent’s attack, the Aggressor Resolve on the other hand reduces damage taken up to 40%. Moreover, it also increases your Stagger Resistance as well. 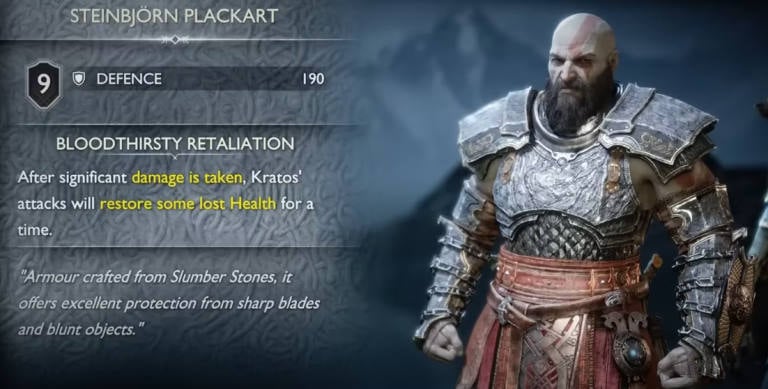 Unlike Surtr’s Scorched Set which specializes more on the offensive side, the Steinbjorn Set focuses on the character’s defense. In fact, considering its defensive ability, the Steinbjorn Set can be said to be the best armor set in the entire game. Once upgraded to its max, it scores a total of 394 defense points which is simply insane.

Moreover, it also possesses some surprising skills that further increase the abilities of this armor set. Firstly, there’s Plackart’s Bloodthirsty Retallion Skill that helps in restoring Kratos’s health for a short period of time after taking in significant damage.

Other than that, it also has a Spartan rage that allows you to completely refill your health in a matter of seconds. The Plackart’s Bloodthirsty Retallion and the Steinbjorn set make a perfect blend. And if that doesn’t make enough, the Stunning Retallion comes out as a hidden weapon that surprises all enemies whenever Kratos had to deal with the damage. 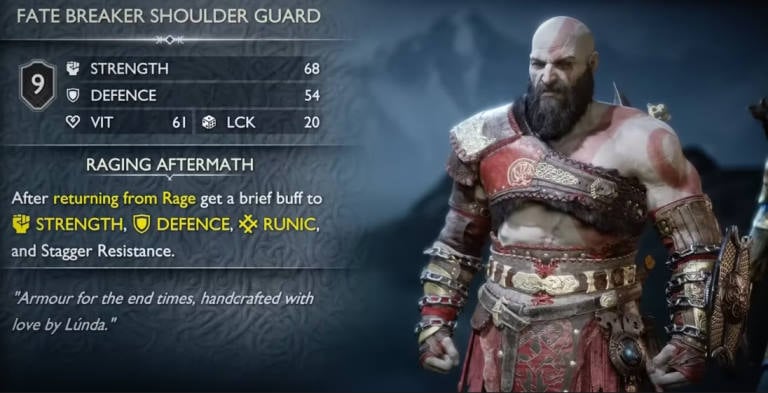 Next, we have the Fate Breaker Set, an all-in-one armor that provides you with almost everything you may need throughout your journey. However, to get so much power, you need to stall for quite some time as you will get this armor in the very last moments of the game. It grants you amazing stat bonuses on defense, vitality, strength, and luck.

Just like the other armors, the Fate Breaker also comes with some useful skills. For instance, the Raging Aftermath comes handful as it provides different kinds of buffs just after using Kratos’s Spartan Rage. Additionally, the Raging Fury skill increases the rate of the rage meter. The combination of these two skills gives you a great advantage on the battlefield. 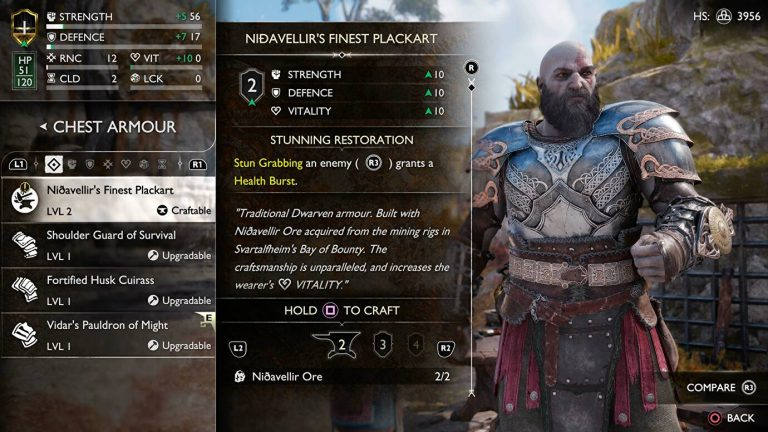 While battling those extremely powerful opponents, you should always care about your health bars. Nidavellir’s Finest Plackart simply puts things into place. It has the ability to heal Kratos every time he stuns enemies in the most crucial parts of the battle. 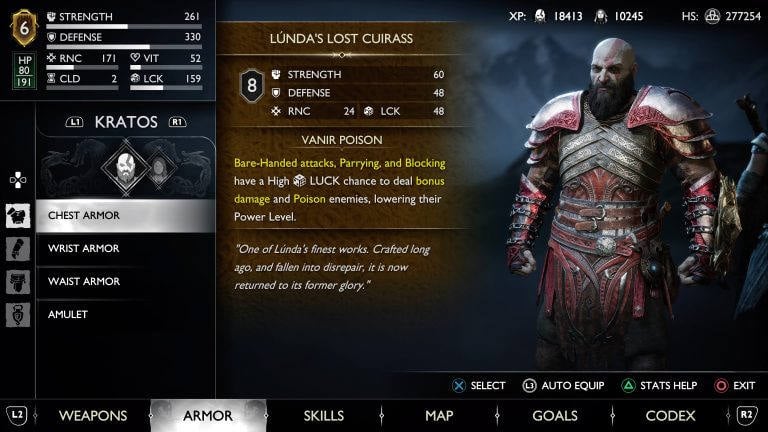 Lunda’s Lost Cuirass is more of a mid-game armor that you can go for after you have reached a certain point in the game. You can receive this armor set in the Mysterious Orb Side quest. The most interesting thing about this armor is that it can suffuse your regular bare-handed attacks into something that severely deals damage to the opponents with the poison status. This deals damage over time and makes things adverse for the enemies.

You can try throwing the Leviathan Axe at your enemy and rather than calling it back, let the bare-handed attack inject the poison to cause the damage. This not only shocks the opponents but also deals great damage with time.

There is a whole lot of armor available in God of War Ragnarok. And if you go on exploring, you might very well come up with something that fits your playstyle much better. However, we have piled up these five armor sets keeping in mind you go for the right one in every part of the game. No doubt, the first three armors were among the strongest armors in the game.

However, the last two armors are specifically mentioned for the initial and mid-stage of the game. Hopefully, this article will give you some idea about the armor sets in God of War Ragnarok and which one to go for at certain points of the game.