The massively multiplayer online roleplaying game (MMORPG) from ZeniMax Online Studios and Bethesda Softworks, Elder Scrolls Online, has sold over 15 million copies and has around 2.5 million monthly active players, as of 2020. Originally released for Microsoft Windows and OS X in 2014, it was released for the PlayStation 4 and Xbox One in 2015. Set in the continent of Tamriel and closely following the storyline of the beloved franchise, the game received mostly positive reviews and went on to win prestigious awards, including the award for “Outstanding Video Game” at the 30th GLAAD Media Awards, and a nomination for the “Still Playing” award at the 2019 Golden Joystick Awards.

Errors in games are so common nowadays that not even a single game is free from them. Either bugs have crept in, or they are affected by some massive programming errors. The players of Elder Scrolls Online are continuously reporting one such error is the error 1005.  They are facing this issue every now and then whenever trying to play the game. Moreover, restarting and reconnecting did not help them a little. So we decided to bring up a detailed guide that will surely help them and rescue from error 1005. If you are one of those players who is facing this, then you are in the right place. So let’s get started with our guide. 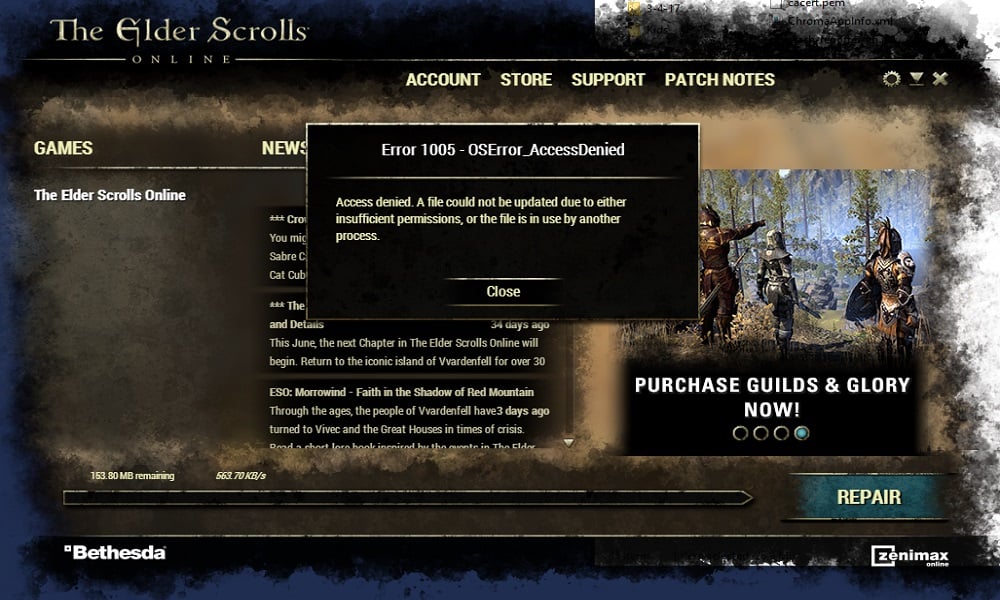 There are certain technical issues faced by players, though. One of these, the Elder Scrolls Online Error 1005, is particularly irksome. It could be caused by quite a few issues, which have been listed below:

Let’s take a look at our detailed guide to fixing the notorious Error 1005 in Elder Scrolls Online.

Some elementary points to check

Before delving deeper into the issue, you should consider the following steps to potentially solve the issue.

Fix: The Elder Scrolls Online Won’t Launch or Not Starting on PC

If the above walkarounds don’t work, consider the solutions we have listed below. Here we have made a detailed guide on solving the error code 1005 in the game. We recommend following the fixes in the order we have discussed so that you don’t face any trouble while making any modifications.

This could be an issue due to the game’s Launcher not receiving administrator permission to run properly without UAC restrictions or interruptions. What you need to do in this case is to open the Elder Scrolls Online Launcher with administrative privileges.

If this does not, follow the next fix quickly.

Fix 2: Disable any Antivirus or Firewall Running on Your System

Antivirus programs have been known to identify the game as a false positive and block it from running. You can correct this by disabling your antivirus or adding an exception for the game’s Launcher. We should mention, though, that completely disabling your antivirus or firewall could lead to your system becoming vulnerable to real viruses and trojans. Therefore, we recommend adding an exception for the game, as shown below:

Due to a number of reasons, game files can get corrupted. A possible reason is an incomplete update of the game. In this case, you will need to repair the files for the game to start working.

The error might be occurring due to mismatching of names of the folder in the EU and NA mega servers. If that’s the case, then renaming the folder in accordance with your game’s region could settle the issue.

Fix 5: Change the Permissions of the Game Folder

The error might turn up if the user account linked to the game does not have sufficient permission to access the installation directory of the game. This can be resolved by making the concerned user the owner of the game’s folder.

Fix 6: Restart Your PC in Safe Mode and Remove the Game’s .exe Files

If the game’s Launcher is not able to access the game’s .exe File even after being granted administrative privileges, then the .exe File is likely to be corrupt. You need to try deleting or renaming the File and repairing the game.

Elder Scrolls Online uses a number of add-ons to enhance its quality of gaming. Any of these getting corrupted could result in the Error 1005. In that situation, it’s best to remove them altogether, as discussed below.

To be on the safe side, you can try renaming these folders or files.

Elder Scrolls Online uses Visual C++ Redistributable for Visual Studio 2015 (vcredist_x64_2015.exe and vcredist_x86_2015.exe) for running. Error 1005 may turn up due to incomplete or failed installation of C++. Repairing it can lead to the error being resolved.

Fix 9: Delete the Program Data Folder of the Game

Fix 10: Launch the Game Directly From the Installation Directory

In case your game’s Launcher is unable to locate the .exe File of Elder Scrolls Online, then launching the game directly from the installation directory may solve the problem.

Fix 11: Uninstall and Delete All of the Game’s Folders and then Reinstall it

Corrupted installation of Elder Scrolls Online could possibly lead to the tenacious Error 1005. If that’s the case, then uninstalling the game, deleting the related game folders, and then reinstalling the game could solve the issue.

In case none of these solutions work, you can consider transferring the updated File of the game from a trustworthy source. Also, you can try resetting your PC to get rid of the 1005 error, though we recommend commenting below before doing so.

GetDroidTips works seamlessly for you people day and night to offer the best iPhone Tips and Tricks, PC tips and tricks, Games and Android Tips and Tricks. So it does become your task to subscribe to our YouTube Channel. Moreover, there, the benefit is yours. We are offering a $150 giveaway contest for all our subscribers who watches our videos there. Now signing off here, to prepare another best guide for you. You can also comment down below with your feedback and queries with your name and e-mail ID, and we will love to help Happy gaming!