In this guide, we will show you how to fix the Screen Death after CorsairVBusDriver.sys failure. Corsair is a computer peripheral and hardware company that has firmly established itself in the gaming hardware segment. To use their devices on your PC, you need to install the recommended drivers as well. However, these drivers seem to be giving a tough time to the end-users, especially to the ones who have installed the latest Windows update.

After installing a recent Windows 10 update on their PC, many users have started facing the CorsairVBusDriver.sys failure error. As a result, they are instantly taken to the BSOD or the dreaded Blue Screen of Death screen. Alongside that, they are greeted with the error message that reads out “System Thread Exception Not Handled”. As of now, this driver issue seems to prevent the PC from booting to the OS.

In some instances, users are able to boot up to the OS but after a few seconds are taken back to the BSOD screen. All in all, they seem to be stuck in a never-ending bootloop. If you are also facing this issue as of now, then you have come to the right place. This tutorial will list out detailed instructions that will help you fix the Screen Death after the CorsairVBusDriver.sys failure. 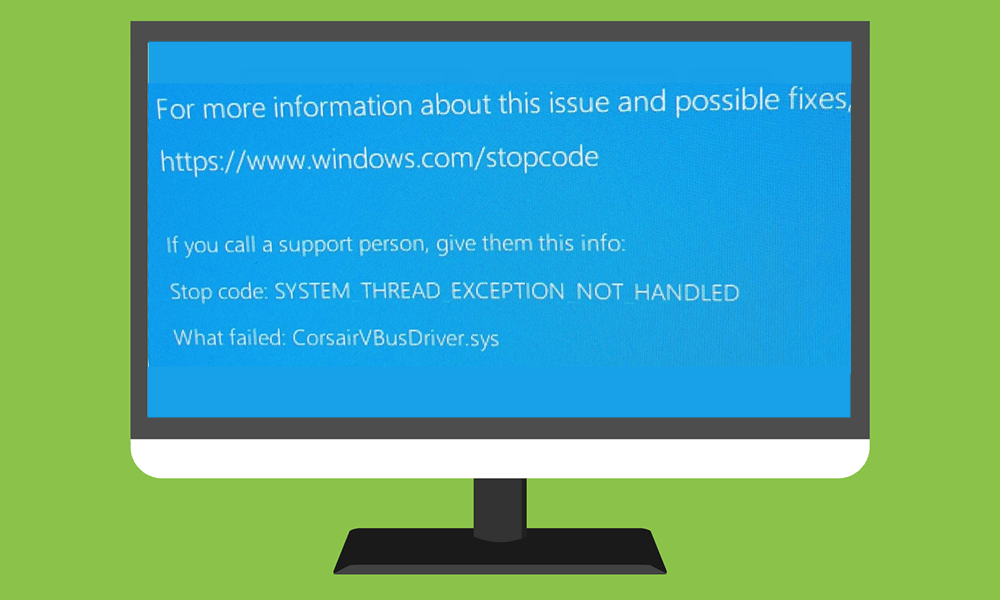 Well, issues with drivers are nothing new. To fix most of these driver issues, you could update, rollback, or uninstall the problematic drivers right from the Device Manager itself. However, when the driver issues get coupled with the Blue Screen of Death screen, things take turn for the worse.

This is because when you face a BSOD error, you wouldn’t able to boot to the OS in the first place. Fortunately, there does still exist a handy way of dealing with such issues. And in this guide, we will be sharing just that. Follow along for the steps to fix the Screen Death after the CorsairVBusDriver.sys failure.

Method 1: Rename the Drivers and preventing Windows from Booting it

In this section, we will be renaming the Corsair drivers from the Advanced Recovery option using CMD. As a result, Windows will not be able to identify this issue-causing driver and wouldn’t load it as well. Hence, your PC would then be booted to the OS and you could easily uninstall this driver from the Device Manager. Here are all the instructions in this regard.

Once the drivers are removed from your PC, it should fix the Screen Death after CorsairVBusDriver.sys failure. However, some users have reported that they aren’t able to boot their PC to the OS after renaming the drivers. If you fall into this category as well, then refer to the next method given below.

If your PC doesn’t boot up after renaming the drivers, then it’s obvious you wouldn’t be able to uninstall drivers via Device Manager. In that case, there is another way out. You could carry out the said task via the Advanced Recovery option using the CMD window. Follow along.

With this, we conclude the guide on how to fix the Screen Death after CorsairVBusDriver.sys failure. We have shared two detailed methods for the same. If you have any queries concerning the aforementioned instructions, do let us know in the comments. Rounding off, here are some iPhone Tips and Tricks, PC tips and tricks, and Android Tips and Tricks that deserve your attention as well.