After lots of debates, discussions, and queries, Xiaomi has rolled out the much-awaited Android Pie for Mi A1 device. As of now, it’s a software update that is limited to a closed community of users. Well, As it happens in the Android community the ROM was leaked in public. So, a lot of curious users installed it. Now, this has lead to trouble among a few users. Being the beta build, the software is apparently causing boot loop issue on Mi A1. A few users who reportedly installed the leaked ROM, are facing the bootloop on their respective Mi A1. However, this can be solved. In this post, we will tell you how to Fix Xiaomi Mi A1 Bootloop After Upgrading to Android 9 Pie Beta.

Download and Install AOSP Android 12 on Xiaomi Mi A1

This solution was initially suggested by XDA member Gray911. So, props to him for finding this fix to the mi A1 boot loop issue. You must keep in mind that, this guide is only for solving the bootloop caused due to the installation of leaked Pie beta build. If you have a bootloop issue which is caused by something else, then this guide won’t help you at all. Basically, it’s a recovery process that will take you back to Android 8.1 Oreo.

You can find the link below for the Android 8.1 Oreo fastboot ROM. You have to flash it using the TWRP. Also, you will need the Mi Flash Tool, which we have attached below. 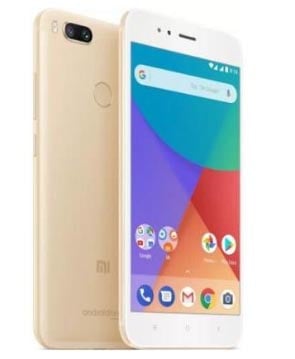 Before doing anything, you will need the Android 8.1 Oreo fastboot ROM, TWRP backup, Mi Flash Tool, and ADB Binary. You can get them in the Downloads section.

Note: Perform this process at your own risk. GetDroidTips will not be responsible for bricking of any devices while/after following this recovery procedure.

Step-1 Unzip the ADB binary zip file. From that, copy and paste the adb folder to the C drive where you have installed ADB on your PC

Step-2 Unzip the TWRP zip file you have downloaded. You will see a folder named TWRP.

Step-3 Now Boot your Mi A1 into Fastboot mode by using Volume Down + Power button. Then connect it to PC using cable.

Step-5 Open command window from there and type the following command.

Step-6  Now copy the folder‘TWRP’ and move it to the device storage.

Step-7 In the TWRP menu select ‘Restore’, > go to the backup folder > tap to restore ‘Boot’ and ‘EFS’ data.

Step-9 Unzip the Android 8.1 Oreo fastboot ROM to any directory on your PC.

Step-11 Click on the ‘Select’ button, browse and select the folder where all the ROM files were extracted earlier.

Step-12 Finally, click on the ‘Flash’ button. It will start flashing the v8.1 Oreo firmware update.

So, that’s it. After completing the installation, your phone will go back to its original state with Android 8.1 Oreo on-board. This will essentially

Tags: Android Pie Bootloop, How to, Xiaomi, Xiaomi Mi A1