Hyper Front 2022 is relatively a new PvP shooter game available for Android and iOS. And just like any other typical shooter game, you will get a combination of both abilities and weapons to flourish in the game. Although the sneaky capabilities provide some extra potential, you will still be relying on weapons in most parts of the Hyper Front 2022 game. Fortunately, as a shooting game, it features versatile weapons, each having its own strengths and weaknesses.

Being new to the list of tactical shooting games, there is not much meta available about Hyper Front as of now. However, based on the stats released in the game, we have ranked the various weapons in Hyper Front into different tiers to provide you with a clearer picture of the weapons. This tier list will help you identify the best weapons, and based on their strengths, you can pick one that suits your playstyle. 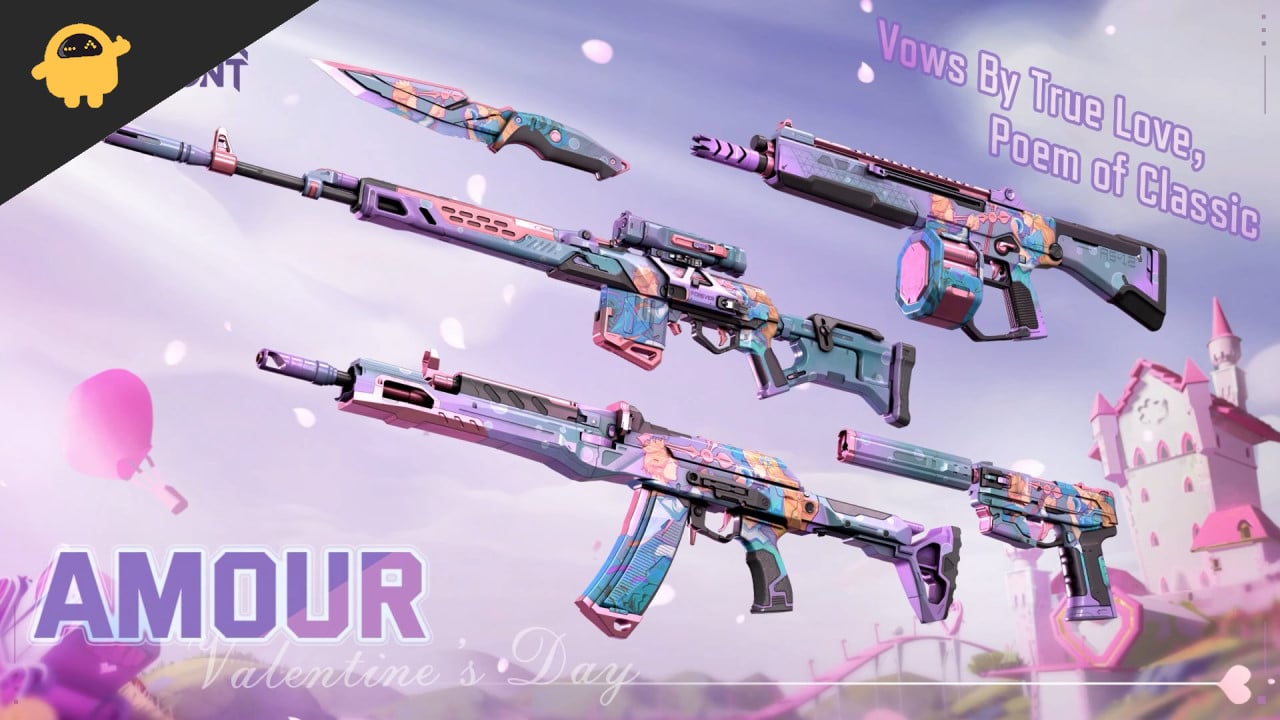 This Hyper Front tier list is entirely based on the stats as provided by the game. We have divided the weapons into five different tiers based on their strengths and powers. It will give you a brief idea of the capabilities of each weapon. However, it is up to the player’s personal tastes and requirements to go for any weapon that seems more suitable to them.

The S-tier list simply holds the best or say, the overpowered weapons in Hyper Front. These weapons have great potential as per their stats and are good for both ranged shootings as well as close encounters. In other words, the S-tier weapons are the most powerful weapons that would help you survive even in the worst situations throughout the gameplay. 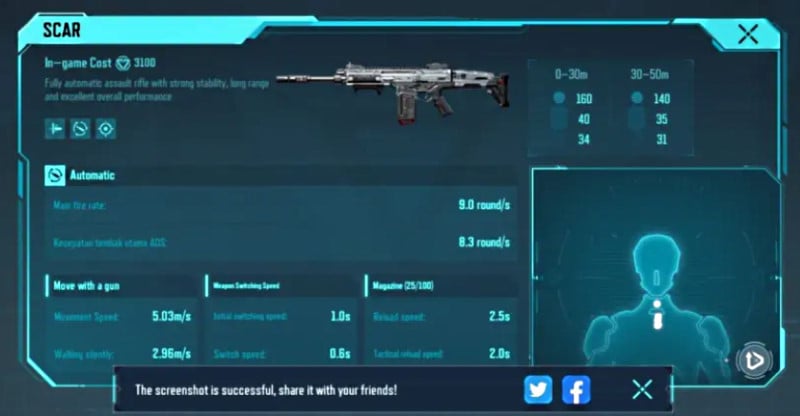 SCAR is simply one of the most powerful yet easy-to-use weapons in Hyper Front. The gun uses mixed mechanics of both AK and Phantom. You can deal potential damage to the enemies no matter whether it is long or short range.

Moreover, the bullet drop damage is also quite considerable. Even though it is mostly used as a backup weapon in Hyper Front, all these make SCAR a perfect weapon to be held throughout the game. 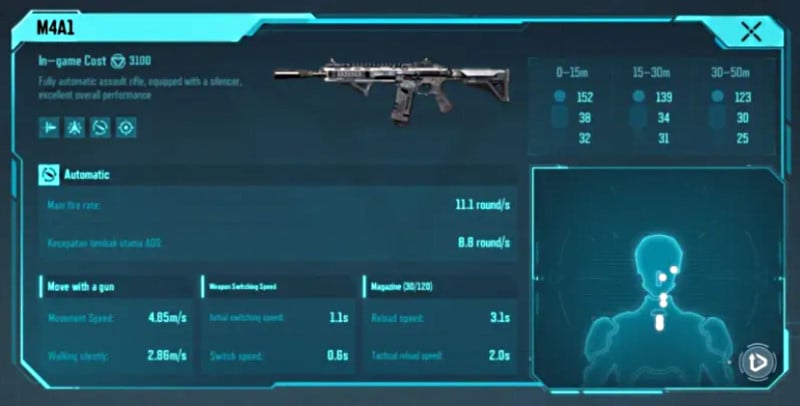 M4A1 commonly known as Phantom in the game is an adaptable weapon that fits almost every situation. It can deal great damage in mid to close-range fights. Moreover, if you love spraying down your enemies, Phantom can be a perfect option. However, it is quite ineffective when it comes to long-range attacks. Hence, you can prefer it if you avoid long-range fights in most circumstances. 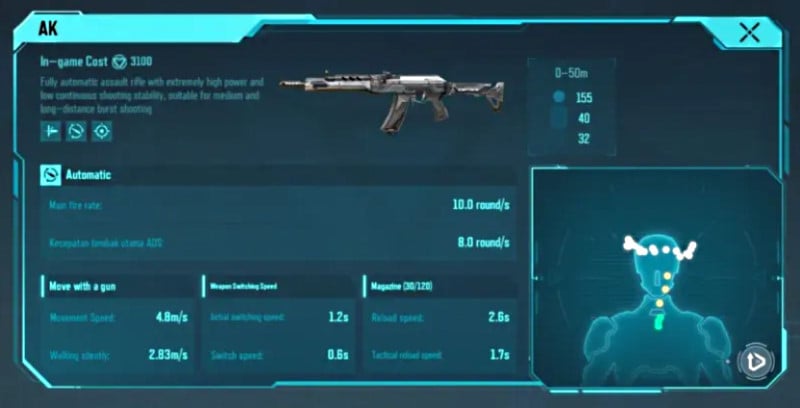 AK is one of the best options in Hyper Front. In fact, it is one of the most preferred weapons in the entire game. The high body damage and flexibility make it perfectly suitable for every kind of situation. However, there’s only one drawback, and that is its complex recoil pattern. 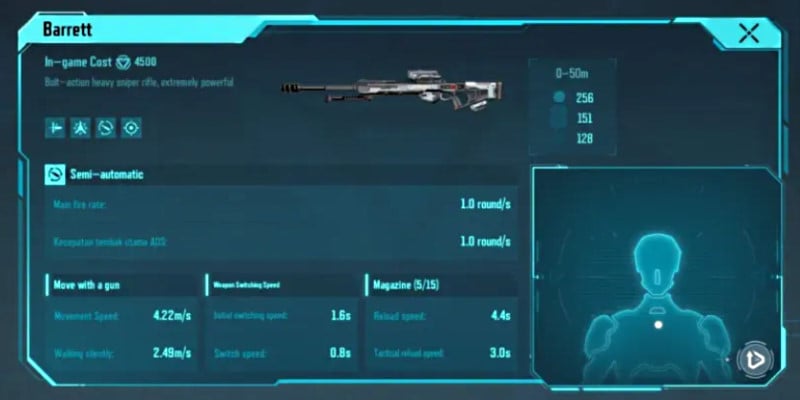 Unlike the others, Barrett is a sniper gun and probably the go-to option for every sniper. The gun deals in heavy damage and even 1-shot kill damage as well. What’s more interesting is that it can work just fine for any range be it long or short.

The A-tier weapons also possess good stats although not as good as the S-tier weapons. Yet they have good capabilities which, if used appropriately can help you survive for long enough into the game. 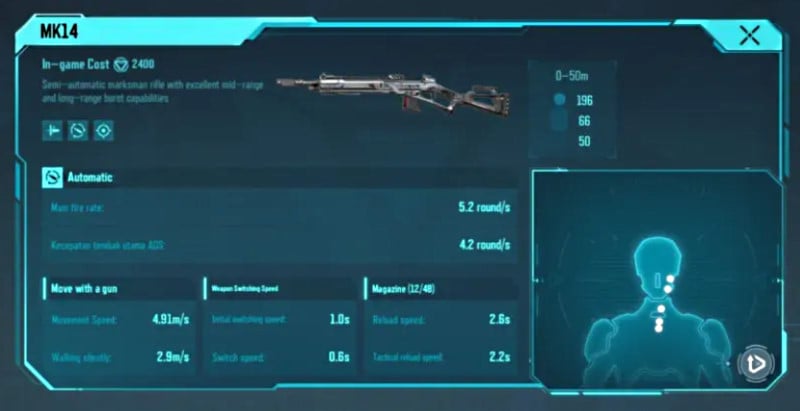 MK14 has high damage capable of dealing against enemies at any range. Just like the AK, MK14 is also mostly referred to by the players. In fact, it can be a pretty gentle option if your intention is to save some credits. Its single bullet mode is also very effective provided that we have a good. Apart from that, there’s even more to MK14. And that is to penetrate through the high walls, which is indeed a great ability in itself. 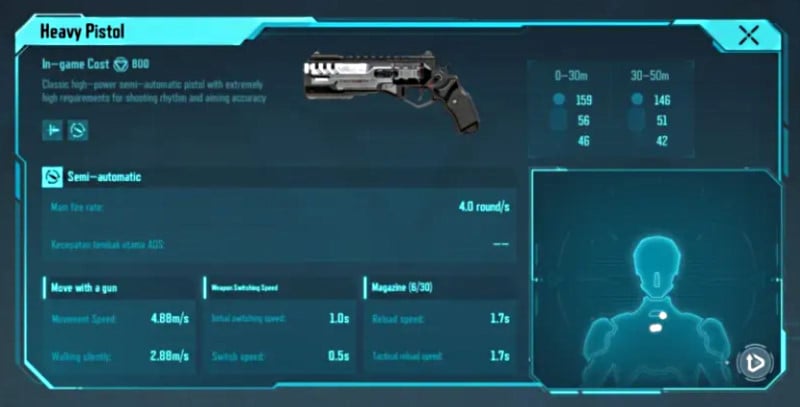 We all have heard the term ‘risk and reward’. The same way, the heave pistol is a high-risk and high-reward pistol in Hyper Front. Although it looks the same as regular pistols, however, there’s much more to it. Firstly, the one-tap feature in Heavy Pistol makes it stand out from the rest and probably serves as its main feature. But other than that, its small magazine size turns out to be a burden on the players. 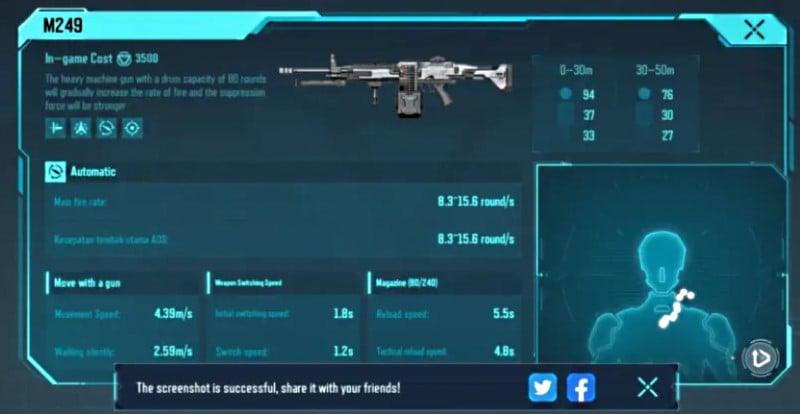 M249 can be a very good pick as an LMG. Firstly, it is loaded with a great magazine capacity, so once you load the gun, you can keep firing for a sufficient amount of time without reloading. Secondly, the firing rate of the gun and less recoil makes it quite a strong weapon. However, when it comes to ranged shootings, M249 can be quite inconsistent with its performance. You can better prefer it for short and mid-range fights. 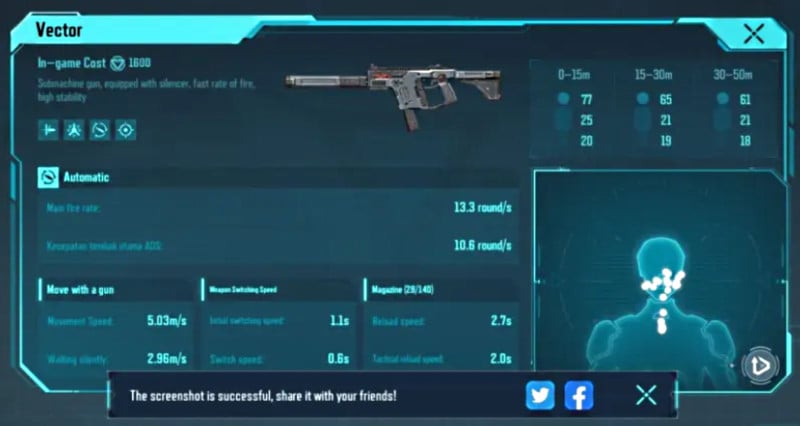 Vector can be your first choice if your team is chasing half-buys. With the help of this SMG you can even take down AK’s and phantoms in close-ranged fights. However, the only condition to use it is that you must have a good aim. 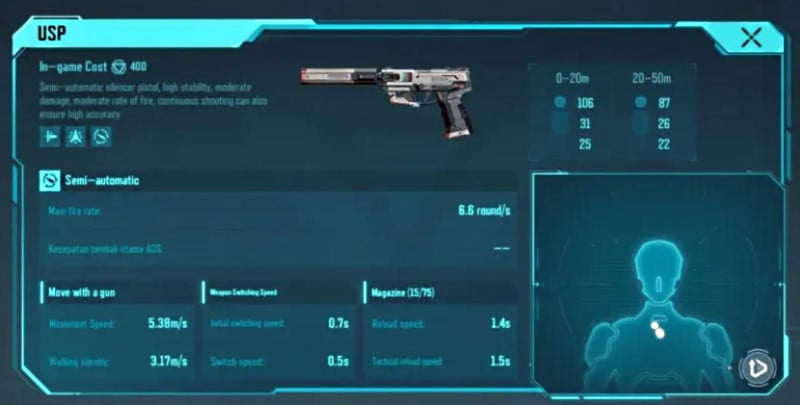 USP being an average class weapon is still a good pick for the long-range attackers. It is basically a pistol with extreme stability and damage dealing over long-range attacks. If compared to that, it falls somewhat short in dealing the same amount of damage over short and mid-range fights.

But again, USP is a perfect replacement for a heavy pistol and if you prefer using pistols for long ranged fights, this can be a decent option. 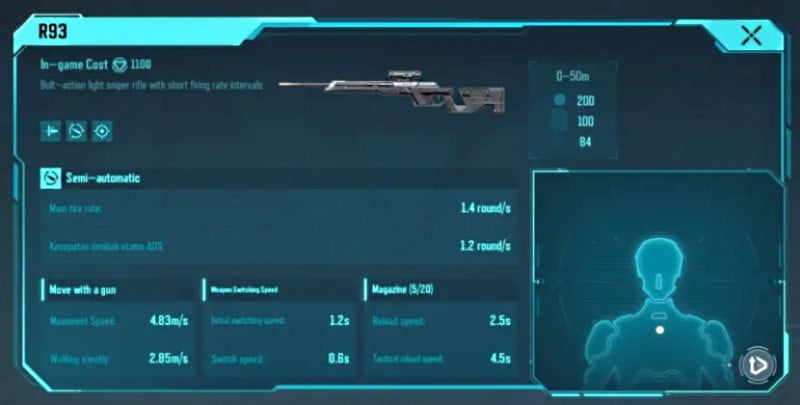 Just like Barrett, R93 is also a sniper but not as effective as R93. It is in fact a budget sniper, and unlike Barrett, R93 takes two rounds to kill the enemies. However, if you are good at aiming, a single headshot is enough to finish off the enemies. But interestingly, this Sniper will provide you with great speed and mobility that will eventually help you in the combats. 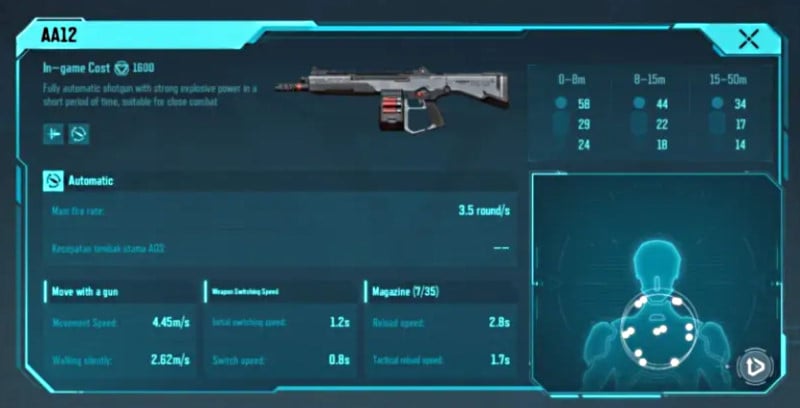 Next, we have a fully automatic shotgun. AA12 is simply an excellent weapon for holding on to aggressive close angles. Although the damage dealt is comparatively lesser, the flexibility and smoothness of the gun make up for most of that part. 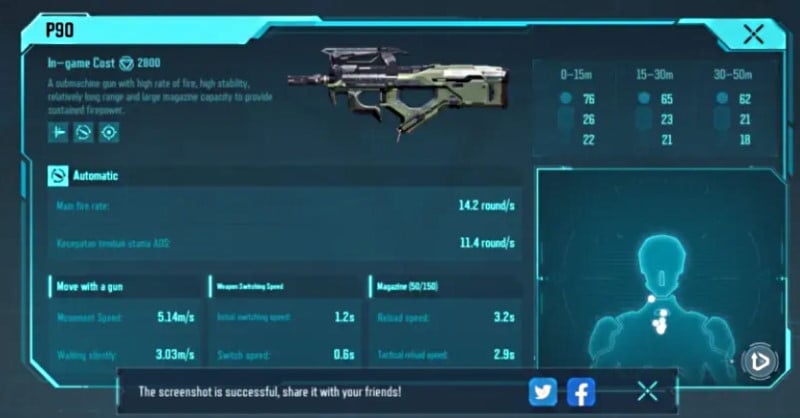 P90 even being on the B-tier list gives tough competition to other higher-tier weapons. It is basically an SMG with a very high fire rate and considerable damage. Both these factor makes it a complete weapon for fights, especially in close combats.

However, P90 comes for quite a great price, which is certainly not justifiable if you are already running on low credits. And if you have stored enough credits, you might want to go with an option having better stats. 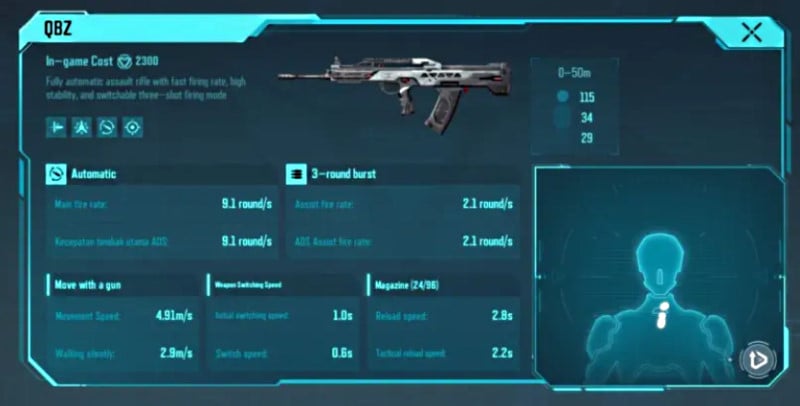 QBZ is a rifle having good enough potential as a weapon in Hyper Front. This weapon can be a good pick, especially for close combats. It is not vital enough for long ranged fights. But the best part here is you can afford this weapon even while running low on credit. 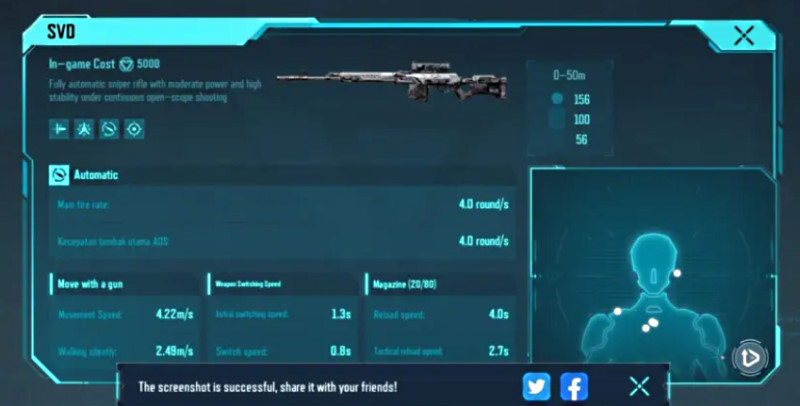 Lastly, we have SVD in our B-tier, a backup sniper that can provide you with good enough support. However, being a backup weapon in the inventory, the price of SVD is relatively higher than the regular weapons.

C-tier weapons come nowhere near the S, A, or B-tier weapons in Hyper Front. In fact, these weapons provide very poor performance that is certainly not enough for you to win any battle. Yes, you can keep them in your inventory but only as a backup weapon. You cannot rely on them as your main weapon while going on battles. 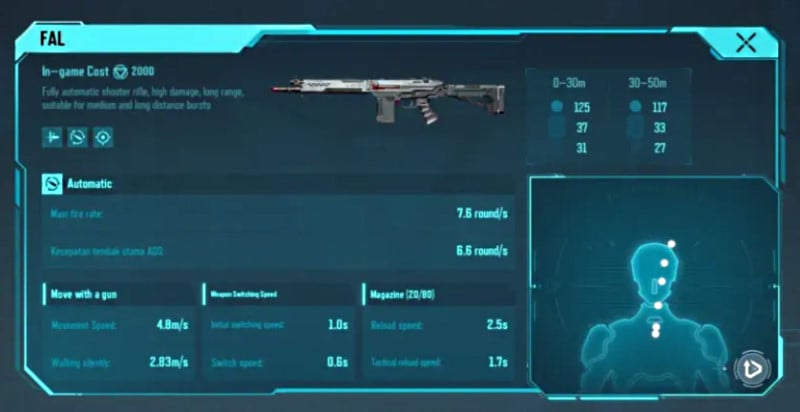 So, the first weapon in our C-tier list is FAL, a rifle with relatively lower stats. Although the damage dealt is quite hefty, the performance of the weapon is far too slow. Moreover, the recoil is also pretty hard to control. As a result, FAL is not an idle option to rely on during a battle as it will only make the situation worse.

Knight certainly exceeds your expectation coming from the C-tier weapons list. It is basically an LMG, however, it can also perform like an SMG as well. With its high firing rate and stability, Knight can pretty much get the job done. But again, its major drawbacks are its long and mid-ranged attacks. 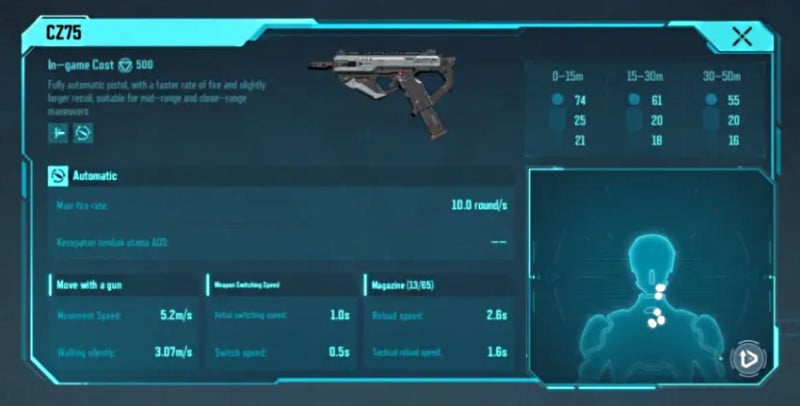 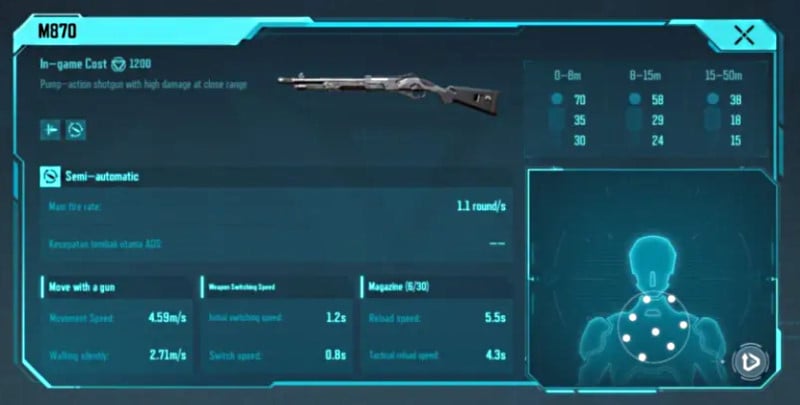 If you prefer using shotguns in Hyper Front, M870 is simply the one with the highest damage. But the worst thing is, its performance is not suitable for any mid or long-range attacks. It can only be useful during camping at places and catching enemies off-guard. 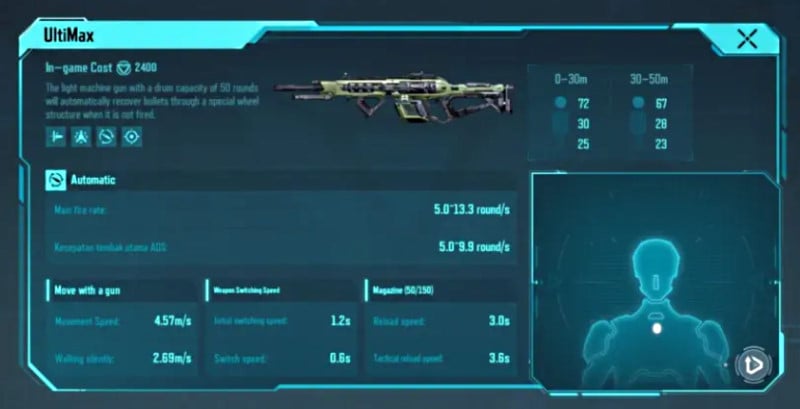 UltiMax is often considered a viable substitute for Knight. It is a machine gun having a magazine capacity of 50 bullets. However, the good thing here is, that it automatically reloads the magazine when not in use.

Finally, we have the D-tier or simply the worst tier in Hyper Front. These weapons are comparatively the worse. Neither do they deal heavy damage, nor they are easy to control. These are low-end guns that can be used for experimental uses too at the beginning of the game itself. 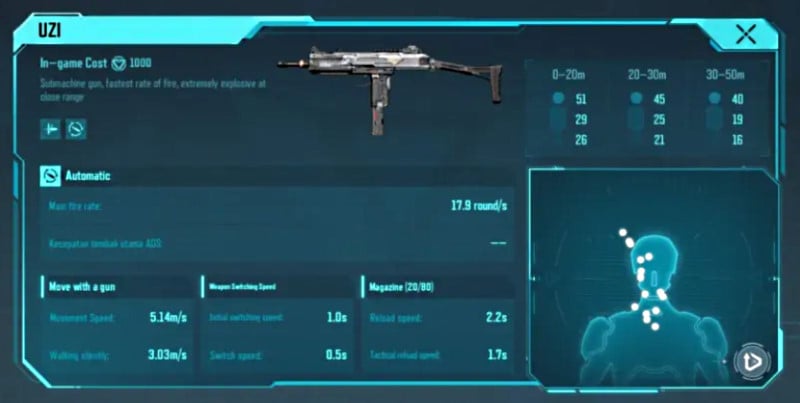 UZI is another backup SMG weapon just like vector and the other SMGs. This gun has low short and mid-range damage. Also, the magazine capacity is low as well. As a result, it is not effective enough when it comes to battles. 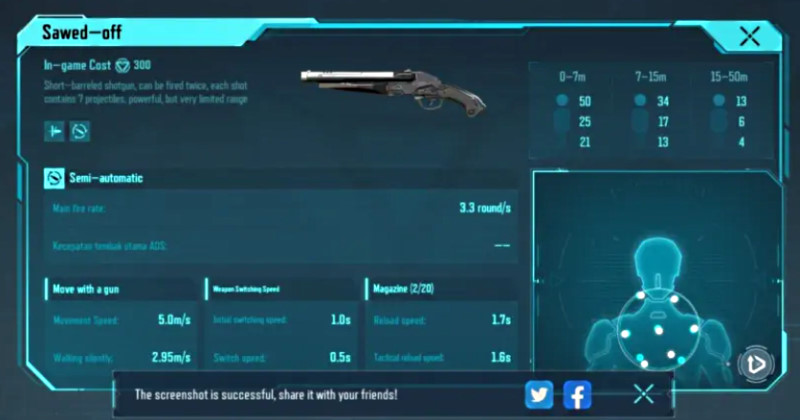 Sawed-off is the only shotgun pistol in the game. There is none of its types. But again, it turns out to be completely useless due to its extremely low damage and magazine capacity. 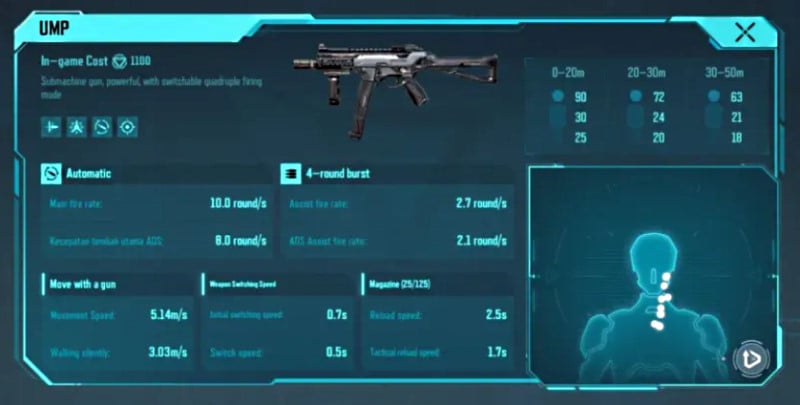 UMP is no doubt a quite powerful gun in the entire Hyper Front game. Looking from the overall perspective, it has got a high firing rate but extremely low damage, especially in mid and long range. But the worst part about this gun is that it is the most difficult weapon to control in this game and does not really suit most of the playstyles. 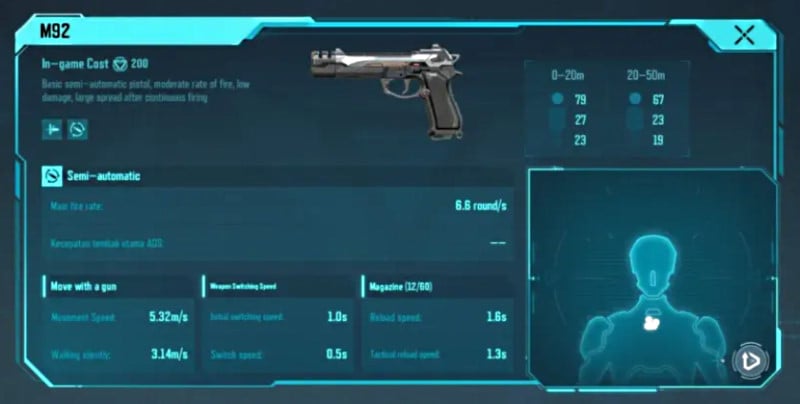 Finally, we have the default gun of Hyper Front. A pistol with very low damage but a considerable overall performance. If used in the appropriate way, M92 can be a deadly weapon but it would take good hands to bring out value from this weapon.

So, that is all about the various weapons in Hyper Front 2022. Since it is relatively a new game, we couldn’t share enough information about the weapons.

However, as per the stats of each weapon, This a so far the most accurate Hyper Front weapons tier-list. Let us know if you have any questions or doubts about the same.