The Photos app is not syncing the photos and media on macOS Ventura. The iPhone or iPad user has pictures and videos on the device. However, the Mac is not showing the media files on the computer. Users can force the service to sync with the computer. We have compiled solutions to allow Mac to sync the media files. Charge your MacBook and connect it to the internet. 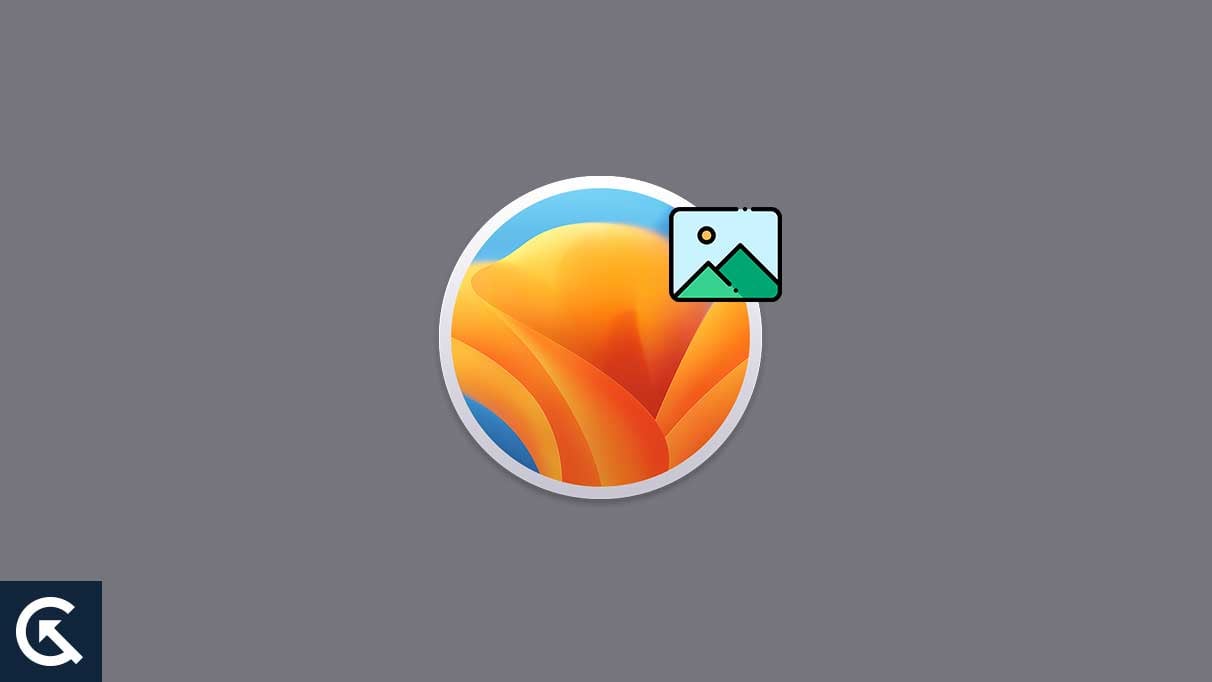 Why Is Mac Not Syncing With iCloud Photos?

Apple developers have created the iCloud service and the ecosystem. The company took years to improve the cloud system for the iPhone, iPad, Watch, Mac, and other products. There are many reasons why the Photos app is not synching in the macOS Ventura.

The AWS (Amazon Web Services) hosts the iCloud service. I have seen many iCloud services facing issues in the past. The AWS server might be down in your region, and the cloud platform is unavailable.

The Photos app has many settings for an immersive user experience. One incorrectly configured setting can ruin the way the application functions. We have covered an effective solution to restore the Photos app to the default settings.

The latest macOS Ventura is an improved version of the previous editions. Apple developers decided to change the System Preferences user interface for iPhone and iPad users. The new operating system has bugs and glitches that take time. Give some time to the developers to recognize and fix the shortcomings.

Applications have glitches and bugs that the developers take notes of and solve through updates. The Photos app has minor bugs or glitches in your macOS machine. You can apply the traditional solution to solve the Photos sync issues.

Most iPhone users maintain a separate Apple account for the Mac. However, the iOS device and the macOS computer should have the same Apple ID to enjoy the ecosystem. Many family members use iCloud services to share media files without transferring them through AirDrop. Use the same Apple ID on Mac and iPhone for a seamless experience.

Many Mac models have 128GB or 512GB SSD installed in the computer. Users install Windows separately on the Mac using the Bootcamp feature. The Photos take up a lot of storage in the machine. The application won’t sync or save the copies if your Mac computer doesn’t have enough storage.

There are multiple internet protocols and cache systems. One severe interruption is enough to prevent the Apple servers from syncing. Identify the root cause of the connection interruption and resolve the issue.

macOS Ventura Photos Is Not Syncing: How To Fix?

Pick up your iPhone and iPad to connect to the Wi-Fi network. Let your iOS device connect with the Apple servers and upload the remaining data to the account. Create the device backup in the cloud storage or computer as a precaution.

Almost every Mac user puts the computer in sleep mode. Hats off to the operating system for managing the memory. However, the drivers and background processes don’t always remain kind to the applications. Save your work and restart the computer to end the session.

2. Choose the “Restart” option from the drop-down menu.

Leave the computer idle for a minute. Log in and launch the Photos app. The operating system will restart the drivers, background processes, and services. Most software-related bugs or glitches go away after restarting the operating system.

AWS (Amazon Web Services) takes care of the Apple cloud services. Server downtime is a real problem, but it’s a rare phenomenon. We will show you how to check the Apple iCloud status online.

1. Open any browser on the Mac. 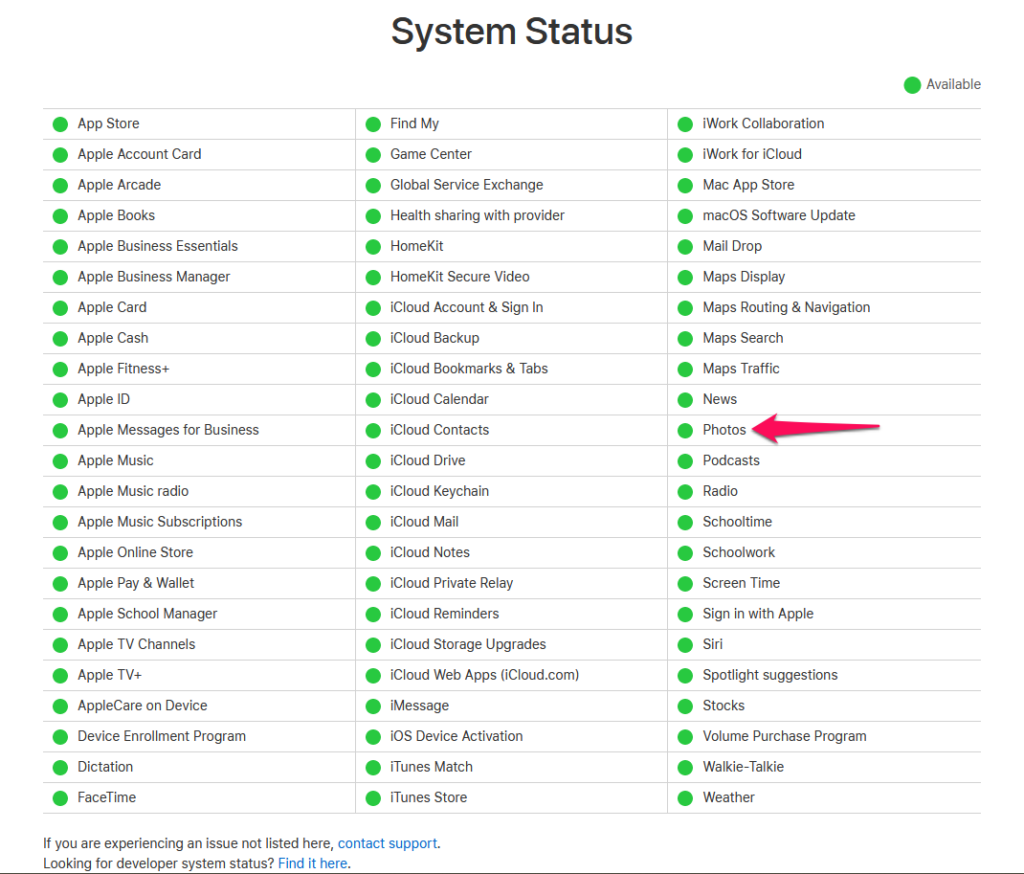 The green bubble tells you the service is available.

The red bubble tells you the service is unavailable.

The yellow bubble tells you that there is a problem, but the developers are working to fix it.

5. Scroll down and check the country.

The website detects the IP address and gives you server status data.

2. Move the mouse cursor toward the application in the dock.

3. Right-click the mouse while highlighting the mouse cursor on the application.

I recommend readers restart the computer to end the session. The operating system will launch the drivers and background processes. You can solve many software bugs or glitches in the Mac.

The Apple ecosystem requires the same Apple ID on Mac, iPhone, Watch, iPad, etc. The photos were taken from an iPhone go into iCloud. The cloud service creates a copy on the Mac using the same Apple account.

1. Pick up your iPhone and Mac.

2. Check the Apple ID on the iPhone.

The iCloud account should be the same on both devices.

Free Up The Internal Storage

The iPhone captures photos in a larger file size. The Mac computer should have enough internal storage to save the copy in the machine. Inspect the Mac storage and free up space for the new photos.

3. Click on the “Storage” option from the top menu.

Delete the files or programs that you no longer need on the computer. Uninstall the applications that you rarely use. Remove the “Install Ventura” file from the Launchpad.

1. Launch Terminal from the Applications or Launchpad.

2. Enter the “sudo killall -HUP mDNSResponder” command in the Terminal.

The Mac has flushed the DNS records from the computer. Shut down the macOS machine and turn it on a minute later.

Force the Photos app to sync with the iCloud services. The traditional method works on all macOS versions. Connect the Mac to an active internet connection. 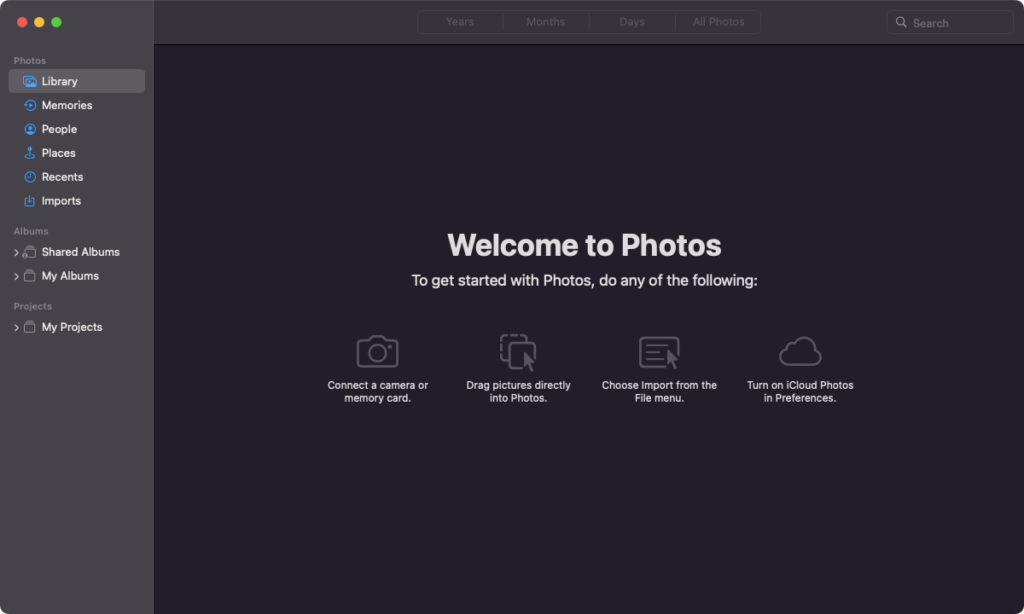 1. Open the “System Settings” from the Apple menu.

A pop-up appears asking permission to delete all photos from the Mac. Delete the media files and enable the option after restarting the computer. The Photos app will connect the iCloud and download the updated media files.

Use the traditional methods to fix the macOS Ventura Photos is not syncing. You don’t need third-party tools to resolve the Mac computer issues. Reach out to Apple customer care for further assistance. Sign out from Apple ID and log in a few hours later. Let us know which solution fixed the Photos app sync issues in the comment section.