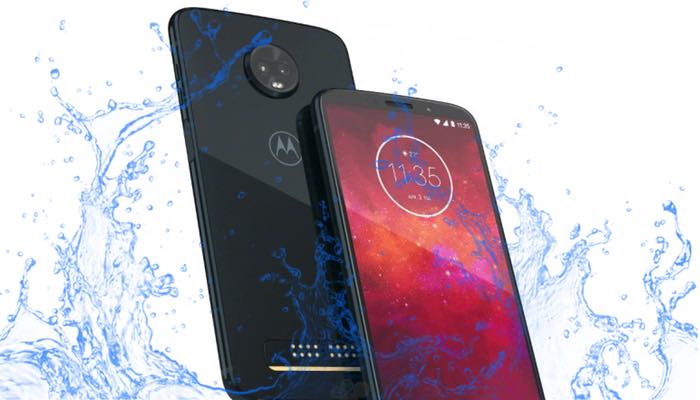 Before we proceed further without Moto Z3 Play waterproof test, let us discuss some of its specifications. It comes with a wonderful screen size of 6.01 inches with a display resolution of 1080 by 2160 pixels. Moto Z3 Play has a powerful octa-core processor cracked at 1.8 GHz which is coupled with 4GB of RAM. It comes with 32GB of onboard storage which you can expand up to 200GB more via a MicroSD card. For camera enthusiasts, it has a 12-megapixel rear shooter with the 8-megapixel front shooter for your selfie needs. Now, let’s start the Motorola Moto Z3 Play Waterproof test.

When we subject Moto Z3 Play underwater droplets, it behaves abnormally. The screen flickers and random apps open. This is because the screen is not designed to work underwater. However, the device resists water droplets because of its all body oleophobic water-resistant coating.

In this test, we are going to suspend the device in artificial rain environment. Later on, we will see if the device is ideal to use in rainy conditions or not. This test will also reveal that whether the users can make or receive calls under rainy or showering conditions.

After testing Motorola Moto Z3 Play in artificial rain condition, we observed that the device flicks and random apps start to open. The device is indeed splash proof, but the user can not use the device when it is in water.

In this test, we are going to wash the device with running tap water for 1 minute and check whether it survives or not.

When we tested Moto Z3 Play in washing test, it was not up to our standards. The device went black after a couple of seconds. This indicates that the device is not entirely waterproof and water does go inside the device. However, after opening and cleaning out the water, the device came back to its working condition. But this clears the fact that Moto Z3 Play is not a waterproof device.

It seems that the device is not waterproof at all. Furthermore, it doesn’t come with official IP68 ratings as well, so that confirms it. However, it is splashproof to some extent. We recommend Moto Z3 Play users not to use their device under water at any circumstances as it may damage your device.