However, Samsung has managed to launch some great smartphones in the early 2020s. It has officially announced about the Galaxy S20 family. Moreover, the Galaxy A51 which was launched back in January has already earned a good reputation in the market. Also, the Galaxy A71 is expected to be released soon by 21st Feb. Samsung has high hopes from both these devices. And both of these devices are expected to come with waterproof IP68 waterproof specifications. Today we will test that out in our Samsung Galaxy A51 & A71 waterproof test.

The South Korean smartphone giant, Samsung is well-known for both flagship and budget phones. It has bought a revolution in the market of smartphones. Samsung is especially known for its built-quality and display. Over the past few years, Samsung has introduced quite a good number of phones. he new smartphones – Galaxy A51 7 A71 will also crush the smartphone market once again. Because most Samsung smartphones now come with additional features such as waterproof design to facilitate underwater photography, more and more customers want to buy them. Well, today we will test the new Samsung Galaxy A51 & A71 weather if they have the waterproof design or not. 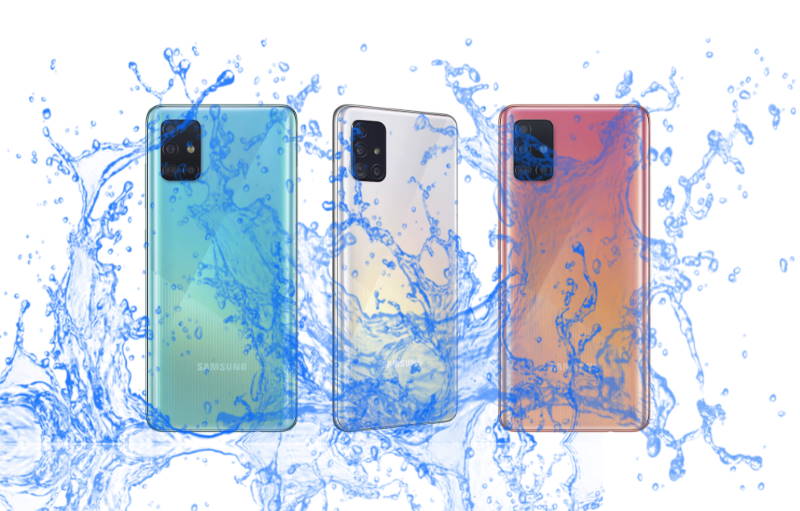 Samsung Galaxy A51 and A71 Waterproof smartphone?

Mot Samsung flagship devices like the new Galaxy S10 and S10 Plus have waterproof specifications. And because Samsung produces waterproof smartphones more and more people love to buy them. Because waterproof devices add an extra layer of protection and give some additional features such as talking in rain or just enjoying underwater selfies. 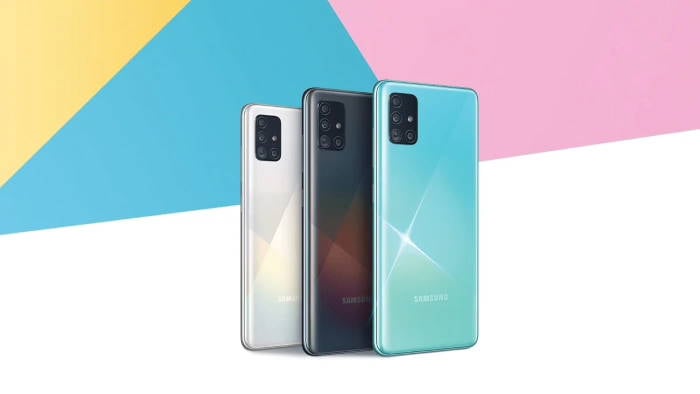 Samsung has introduced the Galaxy A51 with some really impressive looks. The device comes with a 6.5-inch FHD + widescreen display powered by the Super AMOLED technology. It runs on Android 10.0 and has an Exynos 9611 chipset. Moreover, it has three different variants available in terms of storage. This includes 4GB RAM and 64GB internal, 4GB RAM and 128GB internal and 6GB RAM and 128GB internal. Plus, it also gives a dedicated SD card slot. It is available in five different colours including White, Blue, Pink, Prism, and Crush Black. The Galaxy A51 comes with a non-removable Li-Po 4000mAH battery and a 15Watt fast charging support.

The most attractive thing about this device is its main camera which comes with a Quad-cam setup. The rear camera consists of a 48MP main camera with a 12MP ultrawide sensor, a 5MP macro lens, and a 5MP depth-sensor as well. So, you can also shoot 4k videos with this device which is very good news. Moreover, it has a 32MP front camera with an f/2.2 aperture and a 26mm wide-angle lens. You get an under-display Fingerprint sensor and proximity, gyro, accelerometer, etc are also included. Above all, it gives a premium feel in your hands.

Since the new Samsung Galaxy A51 does come with official IP68 waterproof ratings, it good to know that it will withstand any accidental water splash or any exposure to water. And additionally, you can enjoy features like underwater photography as well. Here are the test results:

After conducting the waterproof and splashproof test on the latest Samsung Galaxy A51, we conclude that the device is waterproof and can be used near ponds, water parks, in rain or while taking a shower without getting any water damage. 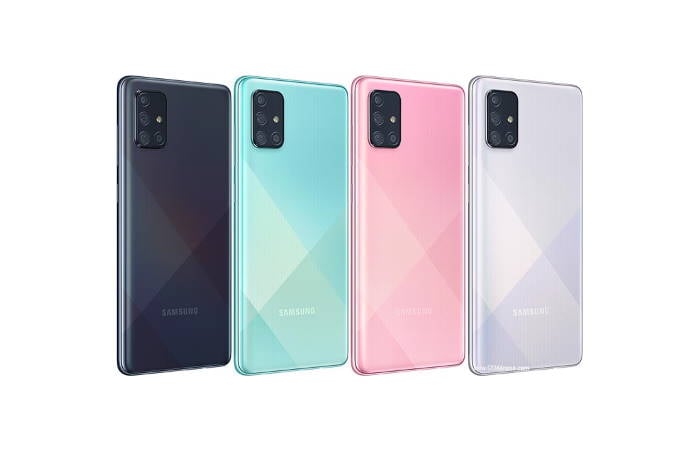 The Samsung Galaxy A71 is a brilliant smartphone that comes with a bundle of great features. It comes with a 6.7-inches Super AMOLED display. The phone runs on Android 10.0 and has a Qualcomm SDM730 Snapdragon 730 chipset. It also has an Adreno 618 GPU system. Thus, you can enjoy extreme gaming like PUBG and ASPHALT9. There are two variants available, 6GB RAM with 128GB internal and 8GB RAM with 128GB internal. In addition, you get a non-removable Li-Po 4500mAH battery with 25Watt fast charging support. It is available in five different colours Pink, Silver, Blue, Prism and Crush Black.

It has a quad-camera setup for its rear camera including a 64MP main camera with a 12MP ultrawide lens, a 5MP macro lens, and a5MP depth-sensor. The device also features a 32MP front camera with a 26mm wide-angle lens. Thus, you can enjoy shooting 4K videos and capture awesome pictures on your smartphone. Plus, it also provides an under-display fingerprint sensor and other features include accelerometer, gyro, compass, etc.

Since the new Samsung Galaxy A71 doesn’t come with any officially IP68 waterproof rating, it can not be considered as a waterproof device. However, it might be waterproof and splashproof as well. So in our test, we will test whether the device can hold itself under a splashproof and waterproof test.

After conducting the waterproof and splashproof test on the latest Samsung Galaxy A71, it seems that the device is splashproof, but it’s not completely waterproof. The device’s speaker and earpiece malfunction show that proper waterproofing is not done to the device.

After conducting a waterproof test on Samsung Galaxy A51 & A71 devices, we can say that they are splashproof. The Galaxy A51 is officially IP68 waterproof but Galaxy A71 is not. So if you’re planning to buy Galaxy A51 for its waterproof security, then it would be a great choice!