The launch of the successors to the Galaxy Note 10 series and the Galaxy Fold is around the corner. Earlier in the year, Samsung released the Galaxy S20 lineup of devices that bring 5G support and of course, better specs. The S20 series also brought an updated software experience which is Samsung One UI 2.1. As Samsung is moving towards its latest One UI skin called One UI 2.5 for its plenty of supported devices, check out the Samsung One UI 2.5 Update: List of Supported devices to receive it.

This latest skin over Android 10 brings a few improvements and enhancements over One UI 2.0 which was made available with the Android 10 update. And it seems Samsung isn’t slowing down on improving their Android skin. New reports suggest that the upcoming Galaxy Note 20 series will come with One UI 2.5 running the show.

Samsung has not yet confirmed or denied the reports nor has it released an updated roadmap for One UI 2.5. One UI 2.5 is going to be based on Android 10, we do expect to see it become available on all Samsung devices that support Android 10. Although, at the time of writing, this is pure speculation. 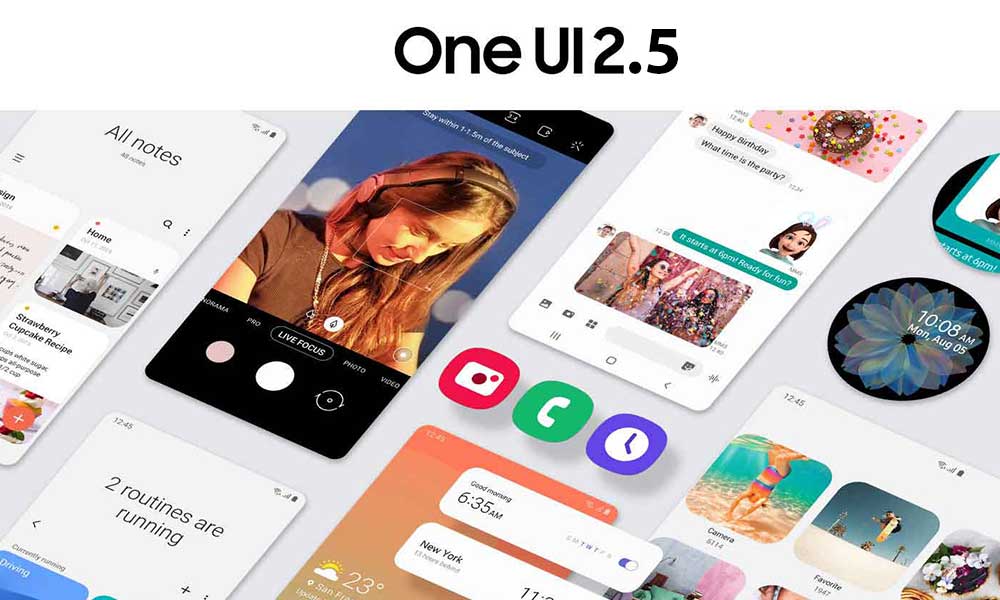 These are the devices that might receive the Android 10 update alongside One UI 2.5. Of course, if and when the One UI 2.5 update arrives, it will not roll out for all devices at the same time. It could take a few months for all the supported smartphones to receive the official stable update.

Updated on Sep 25, 2020: Now, Samsung has started rolling out the One UI 2.5 update for the Galaxy Tab S5e in the UK and Singapore that bumps up a new build number CTI1 with the August 2020 Security Patch Level. While the same CTI1 for the Galaxy Tab S5e also available in Korea but with the latest September 2020 Security Patch. The One UI 2.5 update also arriving at the US-locked and unlocked Galaxy Note 10 models.

Updated on Sep 24, 2020: Samsung has started rolling out the One UI 2.5 update to Galaxy Note 10 Lite model in India recently. According to the reports, the same update is now available for the Galaxy S10 model in Sweden. Meanwhile, the One UI 2.5 is now getting the latest Unicode 13 designs which include around 116 new emojis like pinched fingers, a cute beaver, boba tea, etc.

Some of the reports are suggesting that the One UI 2.5 update based on Android 10 is rolling out for Galaxy S10 in Pakistan and the Galaxy Note 10 in Brazil recently.

Updated on Sep 16, 2020: After waiting for a while, the much-awaited One UI 2.5 update is now live for the Samsung Galaxy S10 Lite in Spain that carries the build number G770FXXU3CTH4. It also offers the latest September 2020 Android Security Patch Level for the Spain variant.

Updated on Sep 08, 2020: Whether you know it or not, with the new One UI 2.5 update, Samsung has added the sound to Motion Photos without any mention in the update changelog. Previously, users couldn’t get sound with the Motion Photos. Meanwhile, some of the reports are coming out that the One UI 2.5 update has broken the GCam ported apps on the Samsung Galaxy S20 lineup devices.

Other important reports are coming out that the US Unlocked Samsung Galaxy S10 series devices would start receiving the One UI 2.5 update in October 2020 expectedly, according to one of the Samsung’s executives.

Updated on Sep 07, 2020: It seems that Samsung has now started One UI 3.0 (Android 11) beta testing program for the Galaxy S20 series, Galaxy A70, Galaxy M40, etc. Whereas, the much-awaited One UI 2.5 latest stable update based on Android 10 should start soon arriving on the Samsung Galaxy Note 9 series devices.

Meanwhile, some of the Samsung Galaxy S20 users have recently started reporting that they’re experiencing GPS tracking related issues on their handsets after updating to the latest stable One UI 2.5 version. There is some issue with the real-time movement tracking on their devices while using the GPS map.

Updated on Sep 04, 2020: All the Samsung Galaxy S10 series devices are now getting the latest One Ui 2.5 update in Germany and the OTA update will arrive soon to the rest of the regions. The new firmware update carries the software version G973FXXU8DTH7, G975FXXU8DTH7, and G970FXXU8DTH7 respectively.

On the other side, the Samsung Galaxy Note 10 Lite has also started receiving the One UI 2.5 update to a limited number of users initially in Spain. It’s expected that the update will roll out soon to other regions as well.

That being said, Android 11 is also around the corner, and you can check out Samsung Galaxy Android 11 Supported Device Tracker: What’s new in One UI 3.0.