Dark Mode and a native screen recorder were among the two most requested features as of late. While Google addressed the former in the latest stable Android release, the latter is yet to be fully incorporated. Well, that wasn’t the case initially as Google had added the screen recording functionality in the Android 10 Beta build. However, when they released the stable version, for reason known best to them, they decided to remove it, or so it seems. The thing is the functionality is still there, albeit hidden way beneath for the normal users. But via a pretty nifty trick, you could enable this screen recorder on any devices running Android 10.

Some OEMs might already have added this feature when they released their customized Android 10 versions. These include Samsung and LG. So if you own any of these devices, you could easily enable this feature without any effort. For all the users having devices of OEMs apart from the two mentioned, well you might have to put in more effort, but the efforts are genuinely rewarding. With that said, here is how you could enable the native screen recorder feature on Android 10. Follow along. 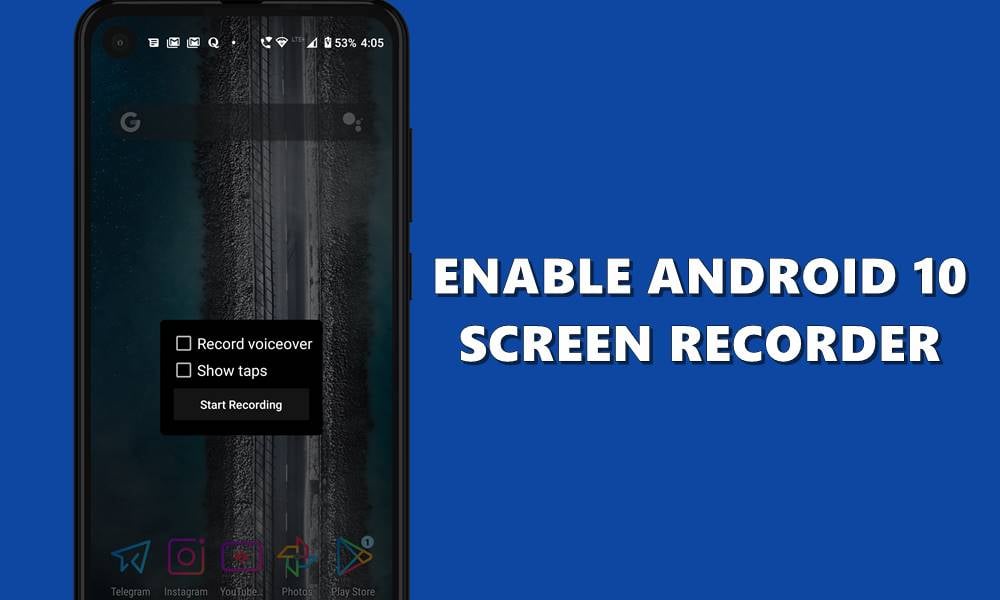 As already mentioned both these devices already have added this feature in their respective OS. Talking about Samsung, when they released the One UI 2.0 for its devices, the screen recorder was a new and welcome addition. Similarly, LG users also got a taste of the same when the latest Android update landed on their devices.

In both these devices, the option to record the screen is present right in the Notification Panel itself. So swipe down the notifications and you should see the Screen Record option. You should also try swiping to the next page and the option might be lying there.

Now as soon as you tap on it, LG devices will start the timer and then the recording. Samsung on the other hand will first ask whether you would like to record audio as well. In this regard, the options will be media sounds, media, and the microphone, or no audio. Select the desired one and hit OK. The recording will then start.

Still, the option isn’t present in all the Samsung and LG devices, even if they are running Android 10. If that is the case with you as well, then head over to the next method given below, and you should achieve success.

Using ADB Commands on Other Devices

As mentioned before, users were able to try out this feature on the Android 10 beta build but once the stable build, landed, this was nowhere to be found. This confused a lot of users as well.

What happened to android 10 native screen recorder? from GooglePixel

But this feature hasn’t been completely removed. If your device is running Android 10 and has the stock Power Menu then you could easily enable the native screen recorder. Let’s check out how this could be done.

For this, we will be using the ADB Commands. In this regard, we will be needing a few things:

That’s it. Now proceed with the steps to enable screen recorder on your Android 10 device.

Things to Keep in Mind

So these were the steps to enable the native screen recorder on Android 10. Do keep in mind that the mileage may vary with the second method as we are using a tweak to enable this method. The users on whose devices the feature is already baked in might enjoy a greater degree of success. But even then we would recommend staying away from third-party screen recorders.

This is because during the recording some confidential and private might also be saved. And with these third party chances are these recordings might end up on their servers. Look we aren’t saying that this does happen, there might be a bleak chance of the same. Still, it is better to be safe than sorry.

On that note, the Android 11 Developer Preview builds this feature works pretty well. So if the Android 10 method isn’t working as expected and you have the required know-how on how to flash these DP, then you could give it a shot. With that said, don’t forget to keep us informed regarding the method you end up choosing. Rounding off, here are some iPhone Tips and Tricks, PC tips and tricks, and Android Tips and Trick that deserve your attention as well.