In the minimalist survival game Vampire Survivors, players must outlast a horde of constantly developing monsters. After choosing one of the more than 20 playable characters. Each with its own starting characteristics and weaponry. You’ll engage in combat with a variety of foes who will occasionally eject XP-gems upon death. This Vampire Survivors wiki guide intends to give you more info about the game, its different features, and most importantly its weapon list.

You can enhance your current weapons and characteristics or choose a new item to add to your loadout every time you advance in level by collecting Gems. If you can make it through the continually expanding horde for 30 minutes, Death will reward you with a meeting. More interesting facts and gameplay tips are below – so be sure to read the full article. 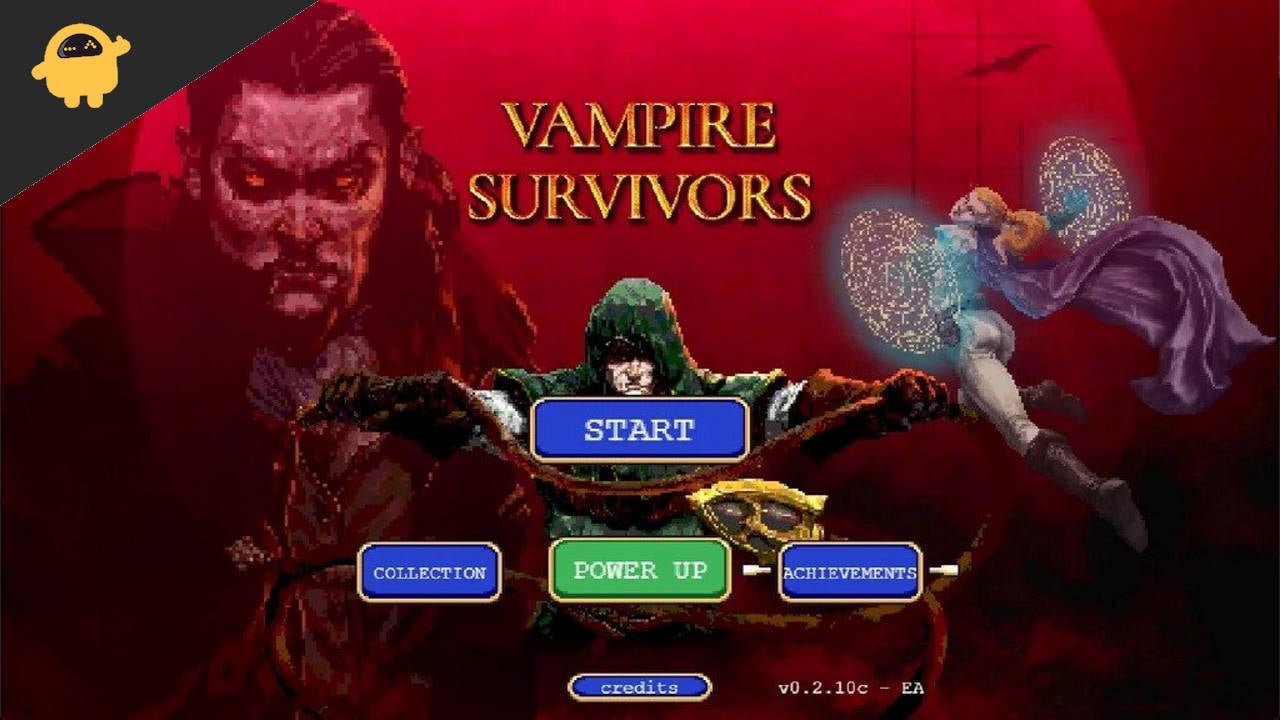 There are many different enemy kinds in Vampire Survivors. Some of which having stronger variations that range, from a little HP boost to a boss-like upgrade. For you to efficiently exploit weak foes and mine stronger enemies for Chests. You must learn your enemies’ actions and have a general idea of how much health they have.

Targeting weak opponents like entry-level bats and blue ghosts will help reduce the horde and accumulate XP-gems for quick upgrades. When you’re in difficulties, it’s also a good idea to identify weaker foes. Because you can quickly kill them to clear a passage to a safer spot or to get to precious things like Floor Chicken. 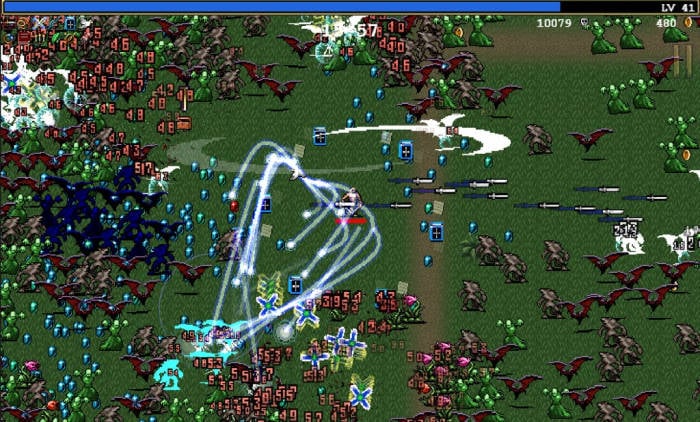 You can enhance your current weapons and characteristics or choose a new item to add to your loadout every time you advance in level by collecting Gems. 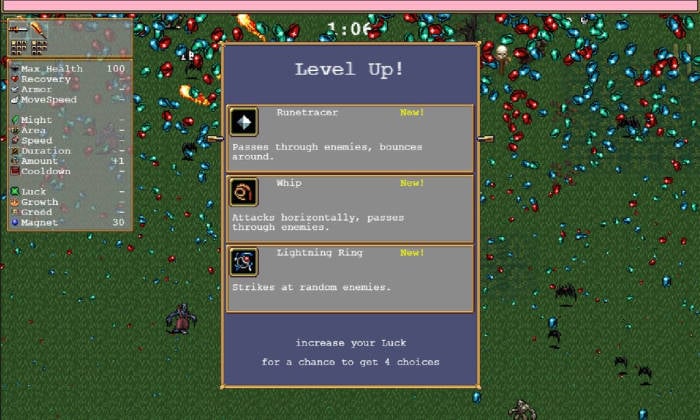 You might discover that you naturally play defensively and avoid approaching foes when playing a survival game. However, in Vampire Survivors, this strategy will ultimately make you weak and defenseless as the horde grows in size and power.

You should seek to tactically eliminate the monsters rather than trying to escape from them in order to survive. By taking down as many foes as you can, you’ll be able to accumulate XP-gems. Also, find Chests that will let you upgrade your stats and equipment. Additionally, you should adopt an aggressive mindset while leveling up as shown above, and while using money to PowerUp in between runs. 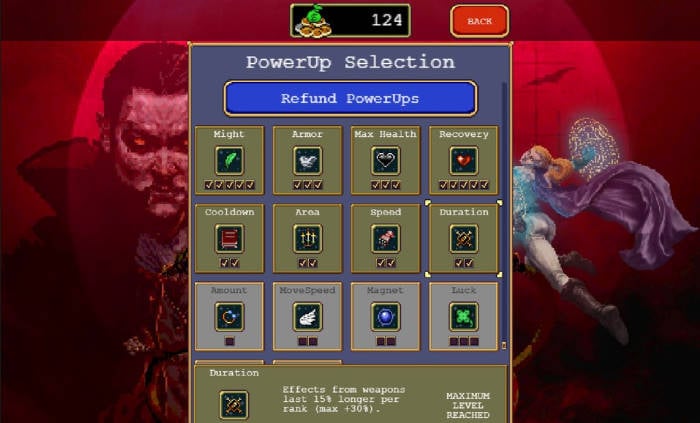 As a run progresses, you’ll find yourself picking up money off the ground, and opening chests will reward you with large currency totals. If you manage to survive the horde for 30 minutes to finish a level, you’ll even receive a 500 coin bonus. These coins will follow you to the lobby if you’re vanquished. You can PowerUp 18 various traits with these coins to improve your readiness for the upcoming run.

Even though you might be hesitant to spend your hard-earned coins on PowerUps, Vampire Survivors provides a refund system that will give you all of your money back. There is no cost associated with refunding and rearranging your PowerUps however much or little you’d like, so you might as well. 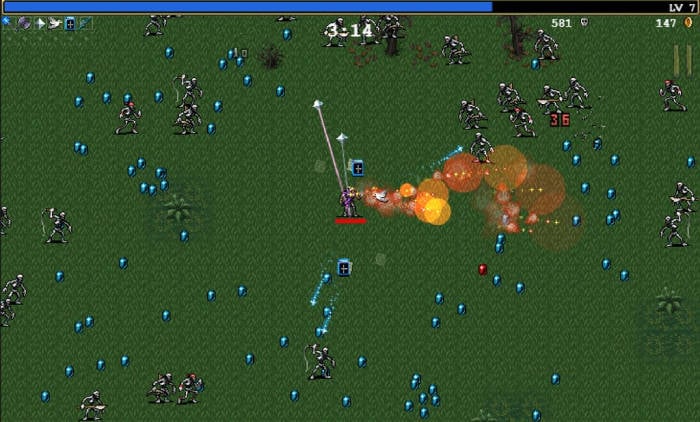 You’ll eventually come across a few special items that spawn as floor loot in addition to XP-gems and Coins. These weapons are extremely potent and include features like a flamethrower, the capacity to stop time, and a magnet that pulls in all nearby XP-gems.

You might be tempted to grab these uncommon things right away due to their powerful nature, but wait until the right time to use them instead. For instance, if a flamethrower Special Item spawns and the opposing horde is mildly threatening.

You ought to hold off on grabbing it until the enemy horde is sufficiently dense to maximize the item’s effect. Special Items can be a priceless way out of trouble that can save even the worst situations. 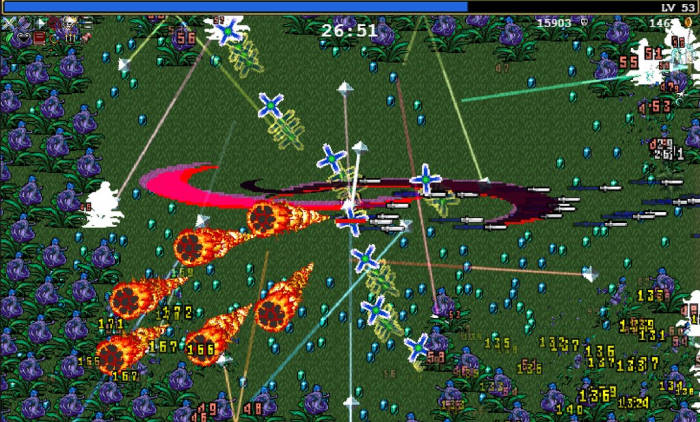 During your runs, Vampire Survivors offers a variety of randomly generated weapons, the majority of which you’ll find as the game progresses naturally. The most potent Weapons, however—the Evolved Weapons—are a little more difficult to acquire.

Attacks with great area of impact and high damage from evolved weapons devastate the enormous horde while also offering bonuses and unique effects.

By levelling up a few weapons to level 8, choose an appropriate item. Then eliminate a tough enemy who drops a chest at least ten minutes into your run. This is how you can construct evolved weapons. Let’s look at an illustration for now before going over all of the Evolved Weapons and the required combinations to unlock them in our Vampire Survivors wiki guide weapon section.

Enter Every Run With A Goal

You should have a broad objective in mind before starting a run so that you may select the PowerUps, Arcanas, and Weapons that will help you to accomplish that objective. While completing a level is the obvious goal for the majority of runs, there are instances when you might be more focused on unlocking a character or finishing a particular Achievement.

For instance, you might start a run with the objective of obtaining the Arcana card VII – Iron Blue Will. This requires you to level Gennaro up to 99. To achieve that goal, you can invest in the Crown PowerUp to raise the value of XP-gems. And while playing the game, you can choose products like the Attractorb to quickly gain XP. These decisions could have a low damage outcome.

Vampire Survivors All Weapons and How to Unlock Them 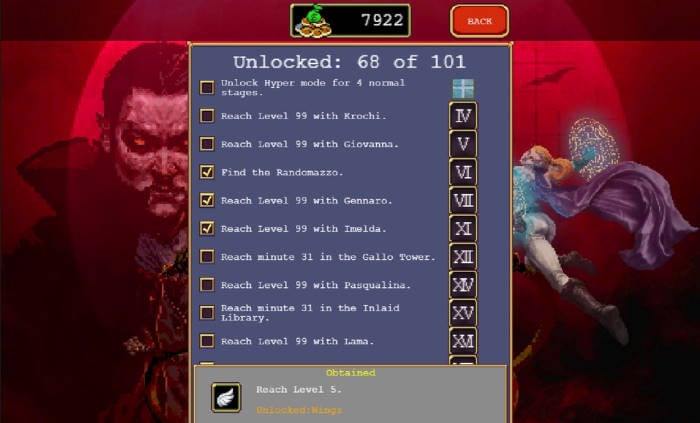 Vampire Survivors All Item Upgrades and How to Unlock Them 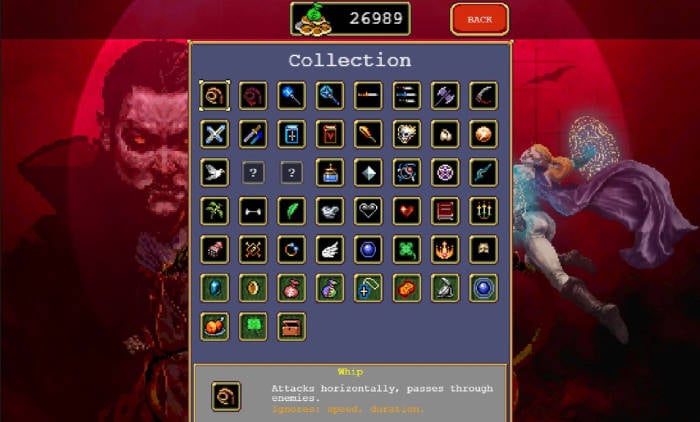 New Weapons and Items in Patch 0.7.2: The most recent update to Vampire Survivors added a tonne of new stuff, including the Whip-like Vento Sacro weapon and Torrona’s Box, a new passive item.

Vento Sacro, the character’s initial weapon, may be obtained by keeping Zi ‘Assunta Belpaese alive for 15 minutes. Vento Sacro’s assault animation is identical to that of its sister weapon, the Whip. But unlike the Whip, it attacks horizontally and in the direction you are facing. 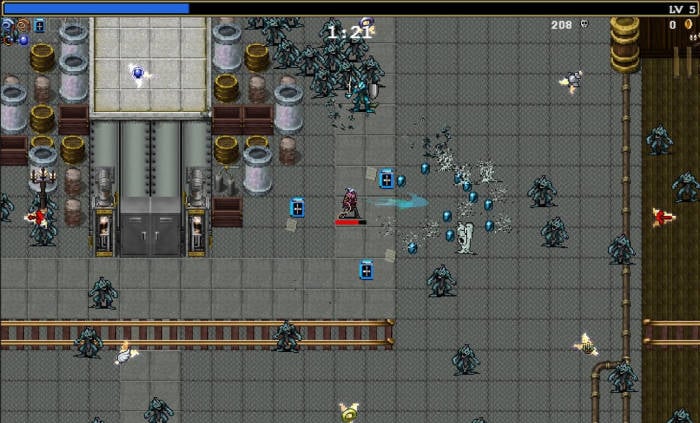 By keeping Zi ‘Assunta Belpaese alive for 15 minutes, the starter weapon for the new character, Vento Sacro, can be unlocked. Although Vento Sacro’s assault animation resembles that of its sister weapon. Vento Sacro attacks in the direction you are facing, not in a set upward orientation. 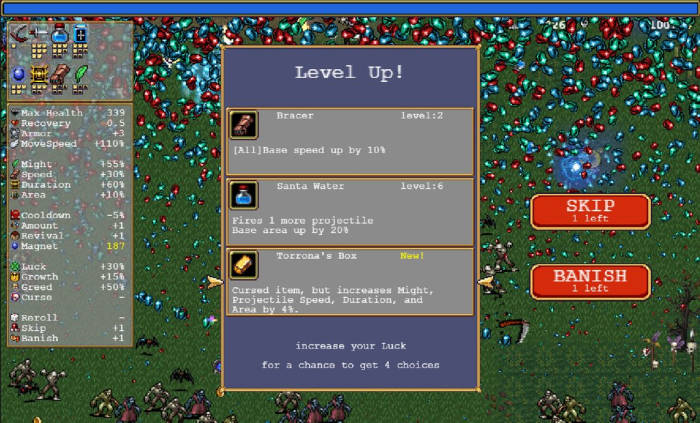 By simultaneously wielding six different weapon evolutions, Torrona’s Box, an item, can be unlocked. While it can be challenging, attempt to memorize the parts of a few weapon evolutions in advance. You can also consult our Vampire Survivors wiki guide item upgrade section to craft evolved weapons while out running to quickly identify the elements you need.

Avoid difficult combos like Crimson Shroud, Infinite Corridor, and Phieraggi when trying to get six weapon evolutions at once because they demand a lot of time and XP expenditures and can reduce the number of evolutions you can construct in a single run. Choose Secret Characters with Evolved Weapons as their starting, such as Red Death and Minnah, if at all possible.

When first obtained, Torrona’s Box raises your Might, Projectile Speed, Duration, and Area by 4%. From Level 2 through Level 8, it raises these attributes by 3%. Torrona’s Box, however, is a cursed item, as indicated by the item’s description, and if you upgrade it to Level 9, it will increase opponent speed, health, quantity, and frequency by 100%. When the Level 9 Torrona’s Box card shows on the Level Up screen, you can prevent buffing your opponents by playing a Banish.

This brings us to the end of this Vampire Survivors wiki guide. We are sure you have learned a bit more about the game and some of its features. Do use the weapon and item upgrade chart to find more and more weapons for your advantage.