Here in this article, we will share with you the Verizon LG V50 ThinQ 5G Software Update list and Android 10 Timeline tracker details in brief. Verizon LG V50 ThinQ 5G software update is based on Android 9.0 Pie and started rolling out recently. Though the firmware update over Android Pie is quite late to the users, still they will be happy to receive it. The LG V50 ThinQ 5G Pie OTA for Verizon carrier comes with the software version of V450VM10e which brings the latest July 2019 Android Security patch level.

The latest patch level of July 2019 typically offers system improvements and enhanced system security as well. The update file size is around 323MB. The Verizon LG V50 ThinQ 5G (LG-V450VM) gets an update in the US. Now, let’s take a look at the recently launched device specifications in brief, and then we will discuss the update tracker and Android 10 timeline expectations.

The LG V50 ThinQ 5G packs a triple rear camera setup of 12MP+12MP+16MP sensors along with an LED flash. While the front features a dual selfie camera of an 8MP + a 5MP sensor with AI modes. The main camera setup features HDR, PDAF, and more. 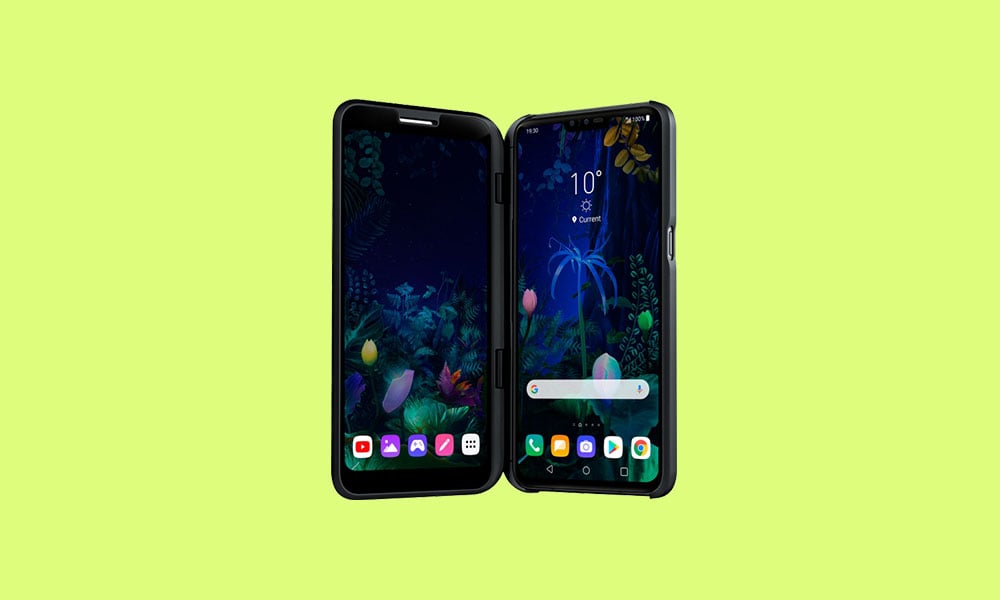 We have provided the most recent Verizon LG V50 ThinQ 5G Software Update list below. The list will be updated with each and every latest firmware update as soon as possible. Check out the recent firmware update list.

The OTA updates roll-out automatically on the specific devices. If your device doesn’t receive OTA updates, you can check for it manually from your phone settings. In order to do it:

Android Q (Android 10) is the most recent Android version in Google’s Android OS. It’s the successor of last year’s Android 9 Pie version. The Android Q is already in its Developer Preview stage and announced as an Android 10 official stable. This time, Google doesn’t name it according to any dessert item. The update will be available for some flagship devices like Pixel series, Essential Ph, etc by the end of this year. After that, the rest of the smartphone OEMs will try to provide updates according to their timeline. Brands like Nokia, Motorola devices that are running on the Android One program are also eligible as well. Even these devices will also get the major Android updates quite fast.

While the rest of the smartphones like Oppo, Vivo, Xiaomi, LG, Sony, HTC, etc devices will receive the Android 10 update first in beta mode and then in the stable version later 2019. In terms of the LG, they provide some of the good devices but way behind in software updates. Their device update track record isn’t that good or consistent or fast enough. However, we can expect the Verizon LG V50 ThinQ 5G handset will get Android 10 update in Q1 2020.

We have to wait for it. Till then stay tuned for more info.