Xiaomi, the Chinese tech giant, has been in the market for a long period. The brand now has unveiled its 10th-anniversary special flagships the Xiaomi Mi 10 and Mi 10 Pro. Both smartphones come with great specifications except for some downgrades like the 90Hz panel. We have seen the 120Hz panel in the Galaxy S20 series, and OnePlus will also use this 120Hz panel in their upcoming OnePlus 8 series of devices. The major flaw is in the Mi 10; the two 2MP sensors and downgraded the ultra-wide-angle sensor. Being a smartphone that is priced in a premium segment and still uses a depth sensor.

Here in this article, we will share with you the Xiaomi Mi 10 Stock Firmware flash files collections with a complete step-by-step guide to flash the firmware file manually.

Google’s Android is open-source software and easily customizable due to its open-source nature. It’s worth mentioning that the OS runs on the Linux platform. Therefore, most advanced users and developers can quickly build any Custom ROM, mod files, root, tweaks, etc. Meanwhile, if you’ve flashed or tweaked your device previously, you may face some lag, boot loop, or soft brick issues. Mostly the Custom ROMs offer better visual treat and customizations but lack stability or security. This can be easily bypassed by flashing the Stock Firmware on your Mi 10 again depending on the model number. 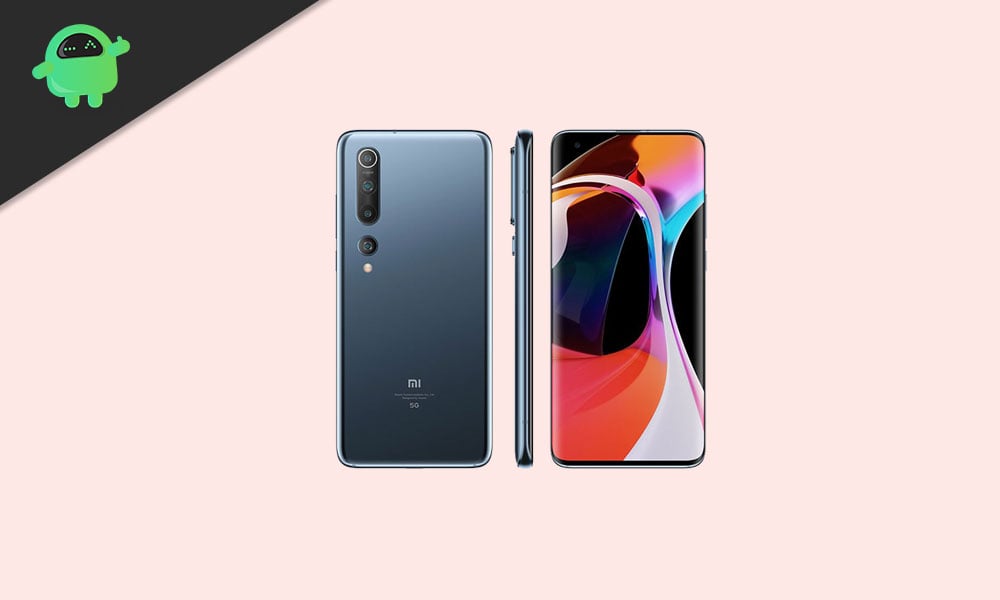 The Xiaomi Mi 10 5G sports a 6.67 Super AMOLED panel with Full HD+ screen resolution and with curved edges. Sadly this panel only supports the 90Hz screen refresh rate, which is lower compared to the 120Hz display on the Galaxy S20 series and 180 Hz touch sampling rate. Further, this display can also go up to 1120 nits of peak brightness, and it can have 4096 levels of brightness adjustment and supports DC dimming. It is also capable of HDR10 and DCI-P3. It also has a screen-to-body ratio of 89.8 percent, an aspect ratio of 18:5:9, a pixel density of 386 Pixel Per Inch (PPI), a contrast ratio of 5,000,000:1, and a resolution of 1080 x 2340 pixels. This panel also features an in-display fingerprint scanner and gets by the Corning Gorilla Glass.

Cameras; Worth the hype?

With this camera set up, the device will allow its users to capture 8K videos at a resolution of 7,680 x 4,320 pixels just like the Galaxy S20 series. It also supports Dual-LED dual-tone flash, HDR, and panorama. To the front, there is a single 20MP sensor with an f/2.0 aperture value, and this sensor sits inside the punch hole, which is placed to the left of the screen.

Most of the Xiaomi devices run on MIUI custom skin over Android versions. The MIUI is a popular and widely used custom skin by users and developers globally. It’s a well polished and fully featured UI just like OxygenOS and EMUI. Some of the other device models are also compatible with the custom MIUI ROM built by third-party developers. With every update, Xiaomi has improved the apps loading time, touch response time, system stability over customizations, and new features. Most of the core Android features are available on the latest MIUI 10 for all the Xiaomi devices. Therefore, you don’t have to wait for the official Android version update.

Mostly the Stock ROM comes pre-installed on the device by smartphone OEMs, but it doesn’t offer that much of customizations like any Custom ROM. Smartphone OEMs also provides locked device bootloader so that users get official update easily and maintain the device privacy. The company offers limited but fully functional and stable official stock firmware, which can be used as a daily driver easily. While you really can’t use a custom firmware as your daily driver due to instability and bugs. Installing Stock firmware on your Xiaomi Mi 10 will get rid of any software-related issue or bug easily. Here is the Xiaomi Mi 10 stock firmware collection, which you can download and flash on your device.

We’re at GetDroidTips will not be responsible for any damage that occurs to the device that may happen during/after following this guide. Do it at your own risk.

To install MIUI Stock ROM on Xiaomi Mi 10, we have provided two methods, either you can follow the Recovery method or the fastboot method. You will find a detailed guide on both methods in a link which is given below:

Guide to Install Stock ROM on any Xiaomi Device

For better visual support, you can also check out our full-depth video tutorial from the link below as well:

We hope that you have successfully installed the latest update on your Xiaomi device by following this guide easily. Feel free to write down in the comments below.