BQ is a brand that offers multiple products and an official flash tool to easily install stock firmware on its devices such as smartphones, tablets, etc. Well, it’s none other than the BQ Firmware Flash Tool that’s currently running on the 3.0 version. You can download this tool for the supported devices that you can find below. It’s also required to upgrade to the new setup file if you’re using the old one.

As we’ve already mentioned, this flash tool will help you to easily install or upgrade the firmware on BQ smartphones by using the Windows computer. The interface is easy to use and with a couple of clicks, you’ll be able to flash stock ROM on your BQ devices. Now, if you’re interested in downloading and using this tool, make sure to create a backup of your BQ handset to the PC. 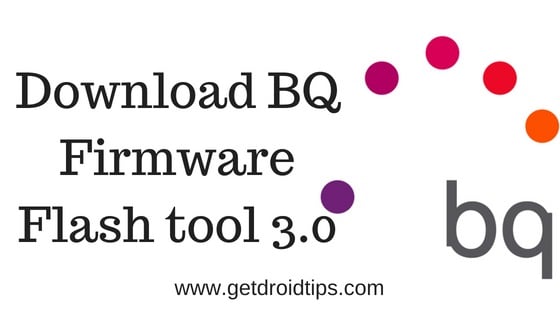 With that being said, let us now take a look at Why we need a flash tool, should we?

There is nothing interesting to do customizations of smartphones or tablet devices if you’re from the Android community. Android OS is highly customizable and it allows you to tweak, change, modify, delete subsystem elements from the root level using multiple ways or tricks whatsoever.

Well, it also needs some knowledge and experience to properly complete the customization or rooting or flashing custom firmware successfully. But the catch is that not everyone is advanced or geek enough to easily complete such steps or tricks on their devices and that’s why flashing the stock firmware requirement comes into the light.

The same thing also goes with the BQ smartphones and their users. If in case, your BQ handset feels slow or laggy or somehow it’s stuck in the bootloop or even goes to brick mode, then the BQ Firmware Flash Tool comes in handy and plays a major role. So that now you can at least easily flash the stock firmware on your BQ device according to the model number without any second thought.

Here are some of the things that make the BQ Firmware tool stand apart from the crowd.

So, these were some of the advantages of the BQ Firmware flash tool which makes it stand apart from the crowd. Now, let us take a look at the BQ Firmware Flash Tool-Supported device list, should we?

Here is a list of devices that are supported by the BQ Firmware Flash Tool:

Once you have downloaded the above tool, just install it on your PC and Flash the Stock Firmware on your BQ Android Device.