When it comes to the mobile gaming industry, Free Fire is one of the most popular survival battle royal games out there. With its initial launch in 2020, the game had a lot variety of guns and other combat items. With progressing time, a lot of improvements have been made, and now users can use different types of skin to boost their gameplay. According to the game arsenal, gun M1887 is one of the strongest showings available for close-range combat. Today in this post, we will see some of the latest Free Fire M1887 Ranked Skins.

The M1887 shotgun in Free Fire was introduced in early 2020 and was very overpowered, according to the gameplay. But over time, the game developers have made the gun balanced and released some skins which you can use to improve the shotgun damage. Due to its abilities in close-range combat, it has quickly become a favorite among players in the game.

Free Fire Keeps Crashing on Android and iOS, How to Fix? 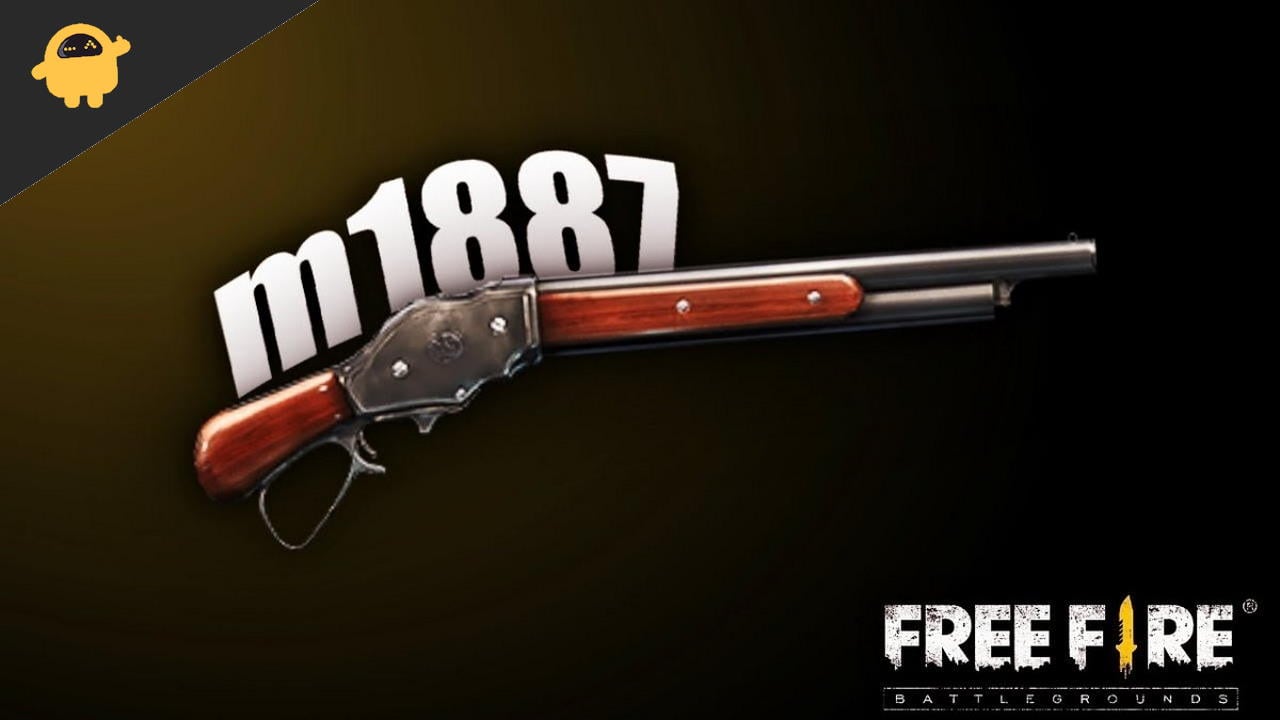 Free Fire M1887 All Ranked Skins: Best One to Worst

The default M1887 skin gives high damage, more than enough to pierce the armor of your enemies. But it is also coupled with a very poor reload time and you only get two bullets per round. But if you are trained enough, these two bullets can be very lethal and can make you win the game. let’s check out the Free Fire M1887 skins in ranked in best to worst order. 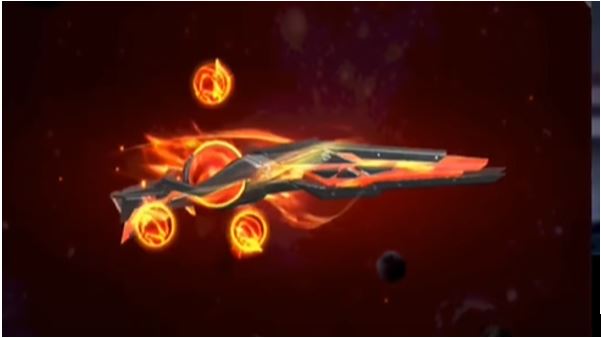 Lava Burst is one of the most expensive guns in the game with a good combination of red and black color. It gives an increased damage and fire rate resulting in maximum damage. This skin will cost you approximately 9000 diamonds which comes to around 81USD or 6000INR. If you dont wish to spend so much on a gun, we have other skins for you as well. 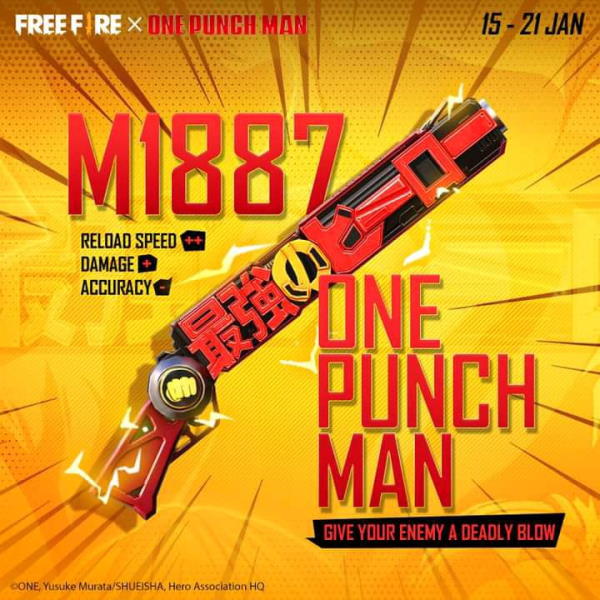 This skin is based on the famous anime – One Punch Man. One-Punch Man is a Japanese superhero who can defeat his enemies with just one punch. It helps to compensate for high reload times and have a good damage rate as well. The dynamics work great, so you won’t miss any chances of a headshot. This skin was a part of the Free Fire X One Punch Man collaboration and is available for a limited time only. 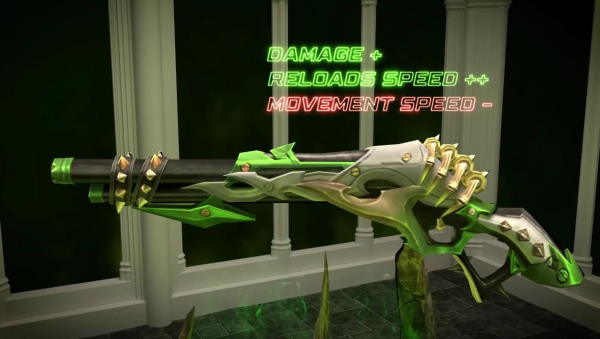 This is the newest skin available in the game and can only be found in the Hope Ascension Token Tower Event. The gun comes with a very amazing look with smokey green patches coupled with skeleton vibes. Hand of Hope M1887 gives good damage and also is fast when it comes to reloading speeds. This skin comes in the premium category, so it will cost you a couple of thousand diamonds in the game. 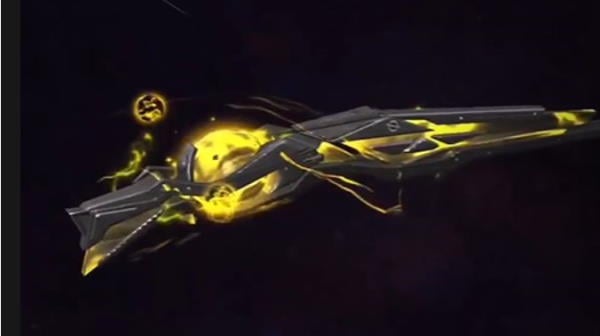 Solaris Burst M1887 is an old skin available in the game and is a very cost-effective item. It gives you an increased rate of fire, so you can shoot your enemies faster with increased accuracy. Solaris Burst M1887 comes with the best accuracy level score and will be easy to target headshots for the enemies. This skin works pretty well in close-range combats but comes with long reloading periods. Currently, this skin is the best cost-effective skin in-game. 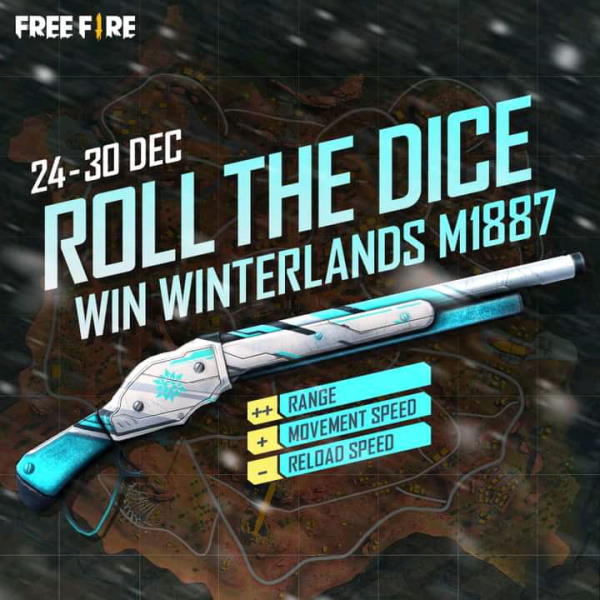 Winterlands M1887 is one of the legendary skins which are aesthetically pleasing. Since its color style, it is best coupled with a snow map. The skin offers a boost in range and movement speed and has a decent range for short-range combat. But, the higher reload time is a major setback for this skin. Looks-wise, the skin looks decent and pretty chill to complement the name ‘Winterlands’, but it is not the best skin in terms of performance. 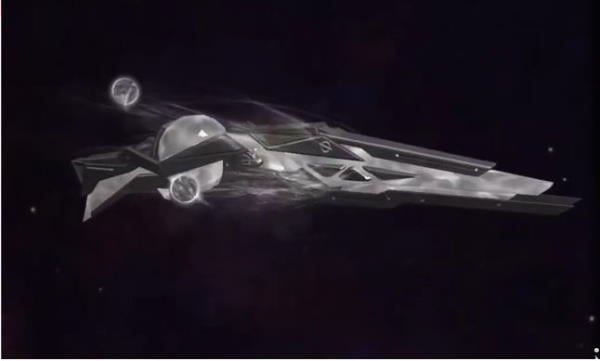 Terrano Burst M1887 comes with the best color combination of black and white and suits with almost all player skins. This skin increases reload speed and reloading speed of a mere 1 second only. It does come with negative accuracy points which is actually helpful for nonexperienced players to train for headshots. If you just starting the game then this is the perfect skin to own as it will only cost you 500-900 diamonds. 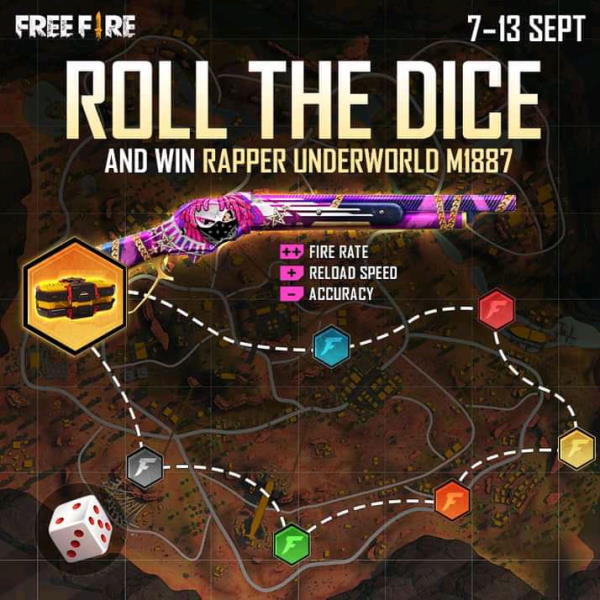 Rapper Underworld M1887 is a very popular gun skin type in the game as it comes with a double increase in the rate of fire. This helps users to know down enemies real quick in short to medium-range combat. The skin also gives the benefit of reload speed which makes it best in terms so using multiple bullets to knock down enemies. Faster reload speeds will ensure that you never spend too much time reloading bullets.

Choosing the best skin for the shotgun can be quite difficult, but the above list of Free Fire M1887 All Ranked Skins will help you make the best out of your diamonds. If you have never got a skin before, then we recommend you to try with Terrano Burst M1887 which is quite affordable and gives you plenty of room to experiment with.