LG was a very popular brand before the rise of budget smartphones from Mi and honor. However, the time is changing rapidly and LG is again gaining its customer trust. This October LG is announcing a new smartphone with a revolutionary 5 camera system. Smartphone enthusiast who like phone photography, this device is just for you. And, from the perspective of security, LG V40 ThinQ comes with waterproof IP68 ratings out of the box. So for customers who are wondering wether LG V40 ThinQ is waterproof or not, it certainly is. However today in this blog post, we will test it to the fullest. So let’s start our LG V40 ThinQ waterproof tets. 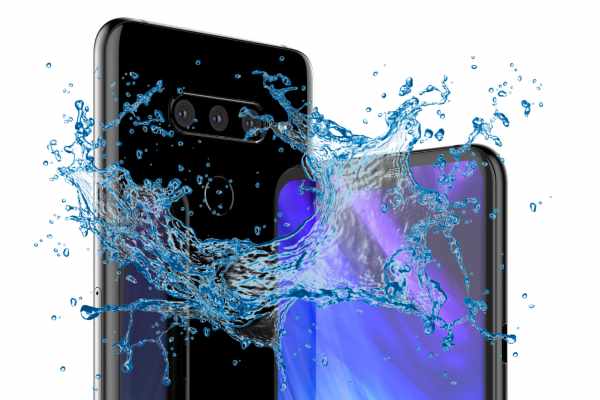 Before starting with our LG V40 ThinQ waterproof test, let’s get to know some features of this amazing smartphone. LG V40 ThinQ comes with an impressive 6.4-inch display with a resolution of 1440 by 3120 pixels. It runs on latest android oreo v8.1 and is powered by Octa-core processor. It comes with 6GB of RAM and 64 GB of storage which you can expand up to 2TB. If we talk about the battery, then it has a massive battery of 3300 mAh which will last you one full day. Talking about the camera department, it has 5 camera setup, 2 in front and 3 at the back. In front, you have two 8MP selfie shooter with wide angle support. At the back you will get three different camera as with 12-megapixel (f/1.5, 1.4-micron) + 16-megapixel (f/1.9, 1.0-micron) + 12-megapixel (f/2.4, 1.0-micron)

In Splash proof test, we will test the device to withstand an accidental water splash. This will tell us whether the device survives in such condition. When we subject LG V40 ThinQ to artificial water splash, the device seems to work fine. there are no complications at all.

In this test, we are going to suspend the device in artificial rain environment. This also mimics the showering conditions as well. This test will tell us whether users can use this device in rainy conditions to make or receive calls.

After testing the LG V40 ThinQ in artificial rain condition, we observed that the device does not show any signs of damage. This means that the users will be able to use the device while it’s raining.

In this test, we are going to wash LG V40 ThinQ with running tap water for 1 minute and check whether it survives or not. This will help us verify that this device is waterproof or not. After performing the washing test, the device seems to be working. There are no signs of water damage to any component of the device.

In this test, we try to check whether the water will go inside LG V40 ThinQ or not.

Also read: Did Nokia launch the Nokia 7.1 Plus with Waterproof IP rate?

After the dustproof test, no dust was found in the internal parts fo the device. This shows that indeed LG V40 ThinQ is dustproof.

After all the test, we come to a conclusion that LG V40 ThinQ is indeed waterproof and dustproof.