Google released a new tablet in the year 2015 which is my favorite tablet Pixel C. It comes out of the box with Android 6.0 Marshmallow. Google Pixel C features a 10.2 inches LTPS IPS display with a resolution of 2560 x 1800 pixels. It is powered by a 1.9 GHz Quad-core Nvidia Tegra X1 chip coupled with 3 GB of RAM and Nvidia Maxwell GPU.  Pixel C sports an 8 MP rear camera with an aperture of f2.2 and a 2MP front-facing camera. It has 2 internal storage variants – 32GB and 64GB inbuilt storage.

To begin with, Google Pixel C launched in August 2016. The smartphone came out of the box with Android 6.0 Marshmallow. In this guide, we will show you which are the best custom ROM for Google Pixel C available now.

As you all know Android is an open source platform where a developer can take all the source code from Google and build their own operating system images for Android phones and tablets from scratch. This Custom or Home built app is known as Custom ROM. Custom ROM replaces your Android Operating system (Stock ROM) which comes with your Phone or Tablet. It comes with a kernel which makes it a fully standalone OS. So some developer in Android Community will customize the Android OS by stripping all the Garbage and makes it a pure Android experience with no carrier-installed app or OEM apps.

This Custom ROM has been updated regularly by the community and developers where; they fix all the bugs-related reports. Custom ROM also allows you to experience latest Android OS even if the OS has not available to your smartphone. 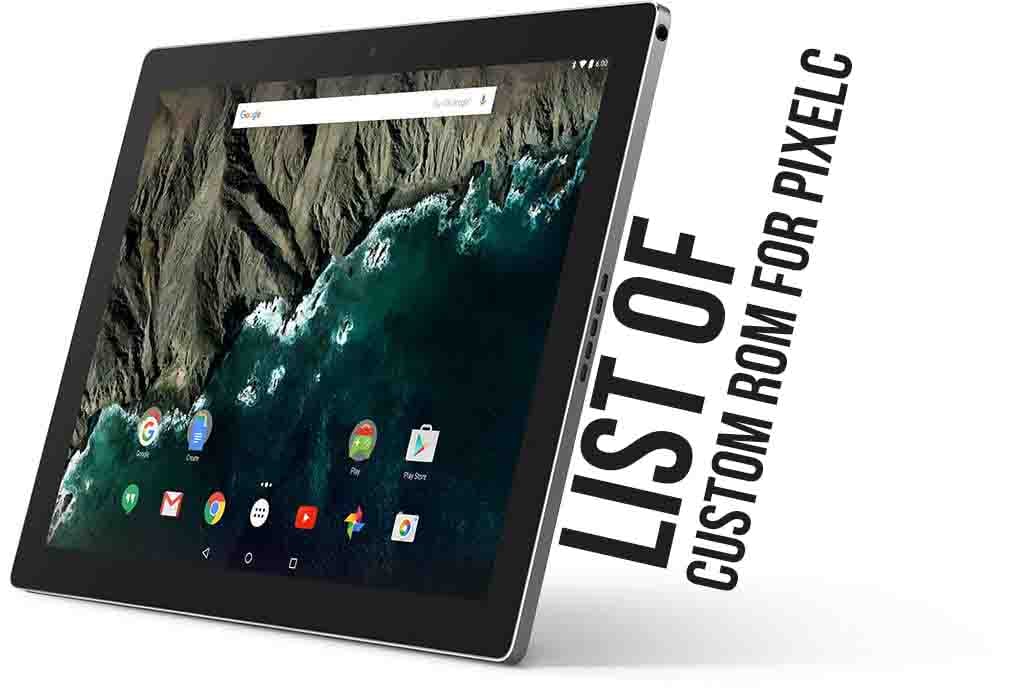 If you have TWRP, then you can simply flash one of the best custom ROM for Google Pixel C here. As we said, there are many custom ROM out there to choose from. Not every Custom ROMs are mean to be stable to use as a daily driver. You can read the description and the features that come with the custom ROM given below for Google Pixel C devices

Android 12 is all about improved personalization and revamped user interface that changes the way to bring more dynamic expression and a whole new design element. It’s a successor of the last-gen Android 11 which was focused on the privacy and security of the user data. While the Android 12 not only focused on privacy features but also on visual treatment.

Lineage OS is the legacy of the old famous custom firmware known as CyanogenMod or CM. The company behind Cyanogen.Inc has withdrawn the popular Android mod, CyanogenMod that left many of its users disappointed. Few believed that a new Android mod will take forward the legacy of CyanogenMod, however, it was all uncertain. It is amidst such chaos that Lineage OS was introduced and definitely it gave back everyone the answer concerning Android mod.

Lineage OS is one of the best custom ROM for any Android smartphone. Lineage ROM for Google Pixel C comes with a lot of features such as Customizable Status bar, Theme, Resizing Nav bar, Nav Bar color, and customization, Quick Toggle feature, and more other features.

You can follow the link to Install Lineage OS for Google Pixel C device.

AOSP Extended ROM is based on the AOSP Source code which brings a lot of various cherry-picked commits from multiple other projects. Being based on AOSP, it provides a smooth and lag-free experience out of the box. The developer of AOSP Extended has promised to add many new features and make it even better for future updates. Like every other custom ROM, AOSP Extended ROM also has many features: a Status bar and Lockscreen customization, Theming, DU’s navbar/Flingbar, AOSPA Pie, and many other features.

Resurrection Remix is a combination of the stability provided by CM and features from Slim, Omni, and original Remix builds providing an awesome variety of performance, customization, power, and the newest features brought directly to your device. This ROM is ultimately full-featured, stable, and combined with the best features of open source ROMs. The ROM is also providing a lot of awesome original Resurrection Remix ROM add-on s in the builds, which include the best of performance, customization, power, and the newest features of your device!

MIUI 14 is the latest iteration of MIUI ROM developed by Xiaomi company. It is also used in many devices as a custom ROM. It is developed based on the Android Operating system. The ROM comes with many features such as Theme support, Customization of the Status bar, Mi Launcher without an app drawer, and many other features.

AICP also stands f0r Android ICE Cold Project, an aftermarket firmware based on Android Open Source Project. The ROM is first developed for the HTC Desire HD device in the year 2012. Since then AICP has evolved into a mature ROM with the BEST community that you can find! Currently, the ROM is based on Lineage OS with some tweaks from AOSP.

As the name suggests, ROM brings the real Google Pixel Experience ROM to Google Pixel C. It has all the features and applications which come out of the box with the Google Pixel smartphone. Now you can experience the real Pixel Smartphone with this ROM.

That’s it! I hope you have installed the Custom ROM for Google Pixel C. Leave a comment or feedback down below. Thank you!.

I hope this guide was helpful to find the Best Custom ROM for Google Pixel C which is suitable for you.