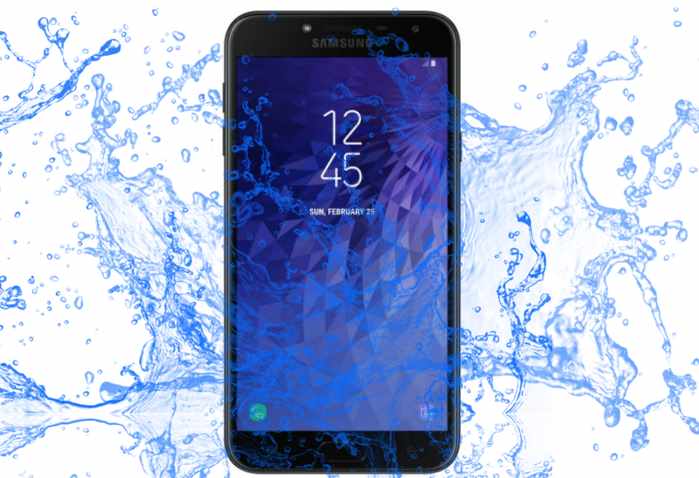 Before proceeding with our Samsung Galaxy J4 waterproof test, let’s get to know some of the device specifications itself. Samsung Galaxy J4 is powered by 1.4Ghz quad-core processor which is backed p by 2GB of RAM. It is featuring a mediocre screen size of 5.5inch with a resolution of 720 by 1280 pixels. The storage of the device can be further extended to 256 GB using an external SD card. Talking about the camera department, Galaxy J4 s featuring a 13MP rear shooter and a 5MP selfie shooter camera. This is more than enough to meet the requirement of normal users.

In Splash proof test, we will test the device to withstand an accidental water splash to see whether the device survives in such condition. Since there is no official information on IP68 ratings about Samsung Galaxy J4 device, so it might not pass our splashproof test.

When we put some artificial water splash over Galaxy J4 device, we did not see any kind of damage at all. The device seems to work fine under water. However, the touchscreen becomes unresponsive.

After testing Samsung Galaxy J4 in artificial rain conditions, we observed that the device is capable of performing well. Since the device touchscreen stops responding to touches underwater, users can not make or receive calls. But hardware is fully functional at this point.

In this test, we are going to wash Samsung Galaxy J4 with running tap water for 1 minute and check whether it survives or not.

In this test, we try to check whether the water will go inside Samsung Galaxy J4 or not

Also read: Is Xiaomi Mi A2 a Waterproof Device In a Budget

When the device is immersed in water, water does not go inside the device. However, there is a little fog around camera lens which indicates that the water indeed goes inside he device. So we warn Galaxy J4 users not to use this device under water. As it may get water damage.