After 15 years of this game’s original release, it returns with much more fun gameplay for the players. Most of the concept of the game remains the same. There are three different playable characters in the game that the players can choose to play with. They are SpongeBob, Patrick, and Sandy. With these three characters available in the game, you might be wondering how to stun Robots.

If you’re one of the many confused people, puzzled about the concept of stunning robots in Battle for Bikini Bottom Rehydrated, then this guide is for you. With the guide below, we’ll equip you with everything you need to know about stunning enemies in the game. So without any further ado, let’s look right into how to Stun Robots in Battle for Bikini Bottom Rehydrated.

How to Stun Robots in Battle for Bikini Bottom Rehydrated

If you’re looking to stun the Robots in Battle for Bikini Bottom Rehydrated, then you should play the game as Patrick.  After switching your character in the game to Patrick, it is his Butt Stomp move that will help you stun those robots around you. While playing as Patrick in Spongebob: Battle for Bikini Bottom Rehydrated, simply jump up into the air and press the circle button if you’re playing on PS4, B if you’re on Xbox One, and the A button on Nintendo Switch and it’ll initiate the Butt Stomp move. After you press the respective key, Patrick will slam back on the ground, which will stun the robots, making them unable to do anything. However, if there are any smaller robots around Patrick, you will instantly defeat them right as Patrick slams back to the ground. 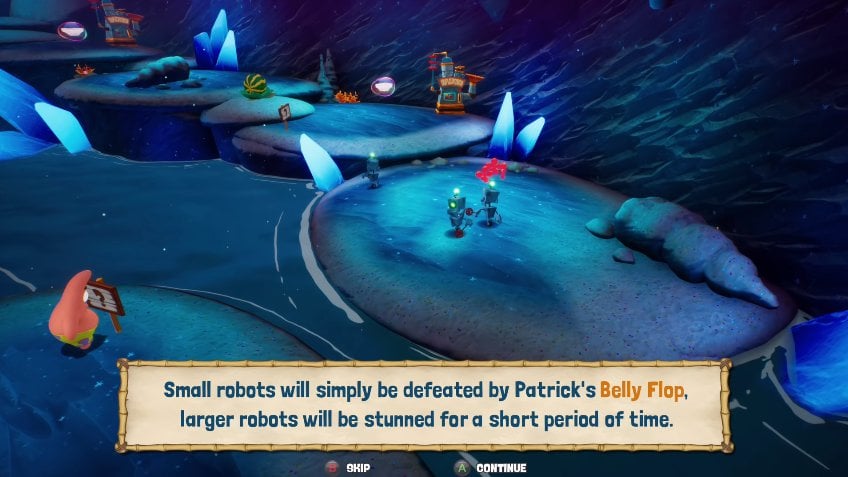 The reason that only Patrick can stun enemies in Spongebob: Battle for Bikini Bottom Rehydrated is due to his ability to throw things. By stunning the robots, you can pick them up like fruit and throw them at things. If any other characters in the game had the same ability to stun the robot, it would be completely useless. With that, we hope reading the guide above has brought some valuable information and help to you. Please let us know by commenting down below if you have any further queries regarding the same.