HMD Global has just launched Nokia 3 V exclusively on Verizon at a price tag of $168. It’s a budget device having an HD+ display, an entry-level processor, and runs on Android 9.0 Pie. The Verizon Wireless carrier has also released a new software update for the device model July security patch. It’s worth mentioning that the Nokia 3 V is a rebranded version of the Nokia 3.1 model. It is exclusive to mobile-carrier Verizon and basically targets the US market. Here in this article, we will share with you the Verizon Nokia 3 V Software Update and Android 10 Timeline Tracker.

If you’re using the handset over Verizon carrier, you will soon receive the latest September 2020 Android Security patch level which also improves the device performance. The software update brings the 00VZW_1_35I software version which is based on Android Pie. Here we have provided the device software update tracker list and Android 10 update expected timeline as well. Check out the full guide. 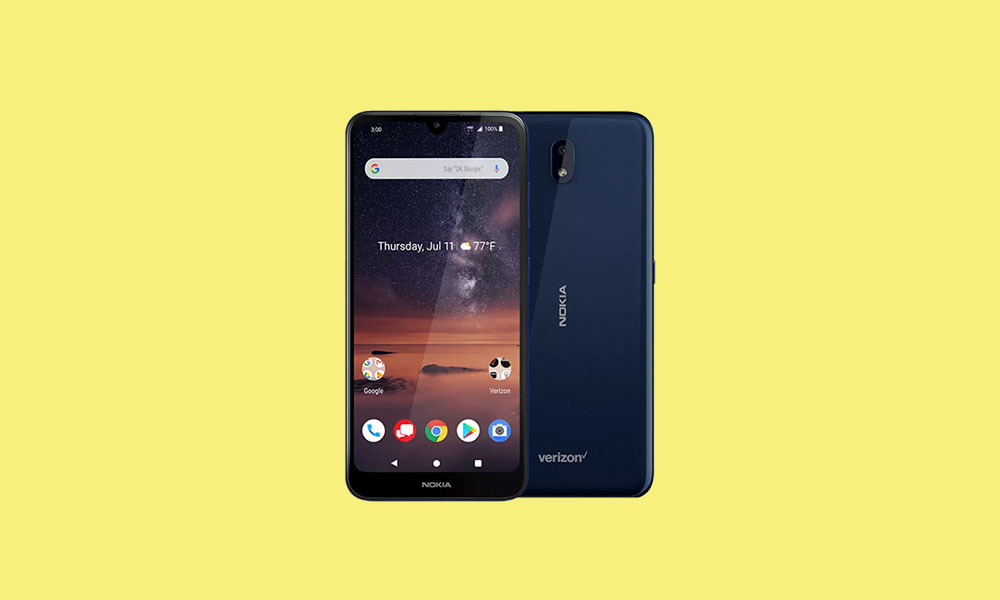 The device comes with 2GB of RAM and 16GB of storage option. It has a Google Assistant button, Wi-Fi, Bluetooth, GPS, Micro USB port, and more. As the device comes with the Android One program, it ensures 18 months of continuous security patch updates and two major Android OS updates.

We have mentioned the Nokia 3 V Software Update tracker list below with the latest update build number, release date, and changelog as well. We will keep updating the list whenever a new software update will be available for this device.

The software OTA update should arrive on your device automatically. However, if you are not receiving any OTA update, you can manually check for it from the device Settings menu.

After downloading the firmware file for Nokia 3 V from the link above, you will need to use QFIL Tool to flash the Stock firmware. Here is a detailed guide mentioned below which you can follow completely.

If in case, the above mentioned QFIL tool doesn’t work, then please follow the Nokia Online Service Tool (OST) method to flash Nokia firmware on Nokia 3 V. That’s an official tool by Nokia and works great.

Google has recently announced the Android 10 stable version after the developer release for a bunch of devices. It’s one of the major Android versions and the latest one from Google as well. We can also say that it’s the successor version of Android Pie. This year Google doesn’t name it of any dessert item and calling it just Android 10. HMD Global is very consistent and fast enough to provide a software update to its devices even after two years or more. The company has a very good update track record. Due to the Android One platform, it’s also become very easy for Nokia brand to release major Android updates for its devices. The Nokia 3 V Verizon model comes with Android 9.0 Pie Stock UI out-of-the-box.

We have to wait for more info. Till then, stay tuned.