Google has released the official Android 10 OS version update for some of the devices. Currently, the Google Pixel series devices and Essential PH are getting a stable update. While the Redmi K20 Pro and OnePlus 7 Pro devices are receiving developer beta update. The latest official Android 10 GSI (generic system images) builds are now available for all the Project Treble supported devices. Now, you can Download Android 10 Q GSI (Generic System image) for all Project treble devices from Google servers.

This is the 10th iteration of Android OS and brings so many new features and system improvements than the previous generation Android 9 Pie. The features include a system-wide dark mode, advanced control over Android app permissions, location control, focus mode, smart reply, and more. We have shared all the top Android 10 features here.

The latest Android 10 Q GSI builds are available to download officially both in latest and beta builds. As we already know, Google released the latest Android 10 (aka Android Q) OS version update for the Pixel series devices along with some other smartphones as well. Google also released the official Android 10 Q GSI builds for all the Project Treble enabled and supported devices. It’s compatible with ARM 64+GSM, ARM64, and x86_64 CPU architecture process. 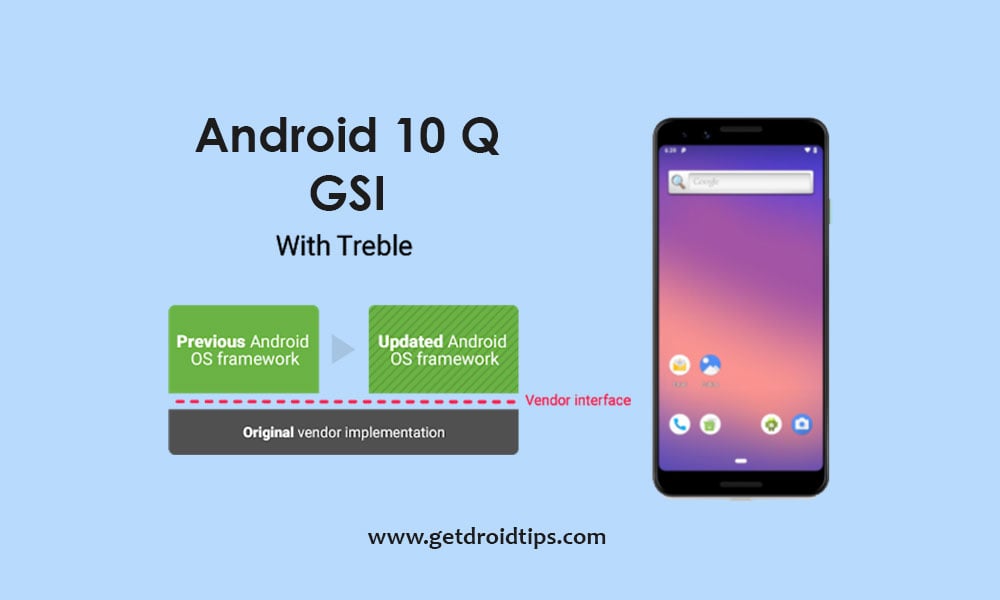 In order to check your device CPU architecture, install the CPU-Z app on your device from below.

gapps variant are broken. Don’t use it.

Only If you use Magisk, use my modded magisk in v200

Ok, this release should be bootable for most people, you can now start reporting broken hardware features.

Gapps are still out of scope, please don’t report issues related to them.

Fixes media codec for some people
Support Asus Zenfone 6’s “front” camera
Fix boot on A/B (previous release 200.c required the removal of system/etc/init/apex-setup.rc)
The navigation bar is still not back by default. Do setprop persist.sys.phh.mainkeys 0 to enable it.

Step 1: First of all, check if your Android phone supports Project Treble or not. You can use the below-mentioned app. Basically, Android phones launched with Android 8.0 Oreo or later out-of-the-box natively support Project Treble and enabled as well.

Step 2: Check if your device has A-only or AB partition.

In order to flash the GSI file on your device via TWRP Recovery, follow the complete steps.

We assume that this guide is helpful to you and you have successfully installed the Android 10 Q GSI on any Project Treble supported devices. If you have any queries, feel free to ask in the comments below.